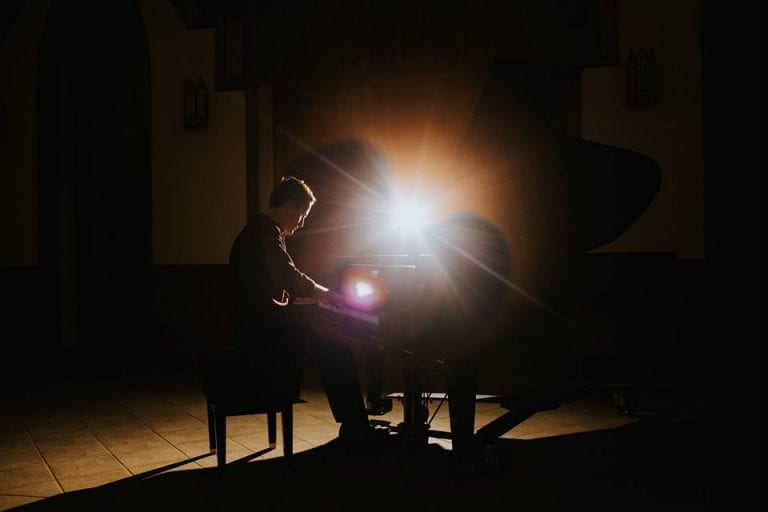 Released last year to critical acclaim, John Burke’s latest solo album, Orogen, is up for a Grammy Sunday night for Best New Age Album. This is Burke’s sixth album — his fourth for solo piano. At age 28, he also composes soundtracks for film and theater.

ArtsATL caught up with the Atlanta native and Oglethorpe University grad just days before his Atlanta departure to L.A. for the 59th annual Grammy show.

ArtsATL: How was it that you came to be a composer?

John Burke: I was always involved in music throughout my life because of my dad being so musically oriented. He was always inspiring me. I learned to play the piano when I was around 15 because of his influence, but it wasn’t until I joined a band in college that I really started writing my own music.

ArtsATL: I heard you were in a Southern rock band while in college at Oglethorpe. Is this the same band you just referenced?

Burke: Yes. We were called Vinyl and we had a real vinyl sound. We really sounded like a band of the seventies like The Allman Brothers Band or Lynyrd Skynyrd.

ArtsATL: Was there a specific thing that happened to you when you were in Vinyl which led to you composing music?

Burke: We loved listening to all sorts of music, like The Rolling Stones and The Doors. I especially loved listening to The Doors, and it was at about this time that I discovered an amazing pianist, George Winston — who had done a tribute to the music of The Doors. I loved this so much. So, yes, I’d have to say that it was this discovery of George Winston which was the very moment that caused me to want to become a composer.

ArtsATL: How did playing in that Southern rock band help prepare you for what you do currently?

Burke: Oh wow. My good buddy, John King [now a successful country singer], who got me into Vinyl, used to say, “Hit it, Burke.” And the band would just let me run with it. I truly love to improvise so it was a perfect for me. I was really experimenting with eight bars and learning about soloing. I was making up stuff on the fly, so it had everything to do with the improvising I love and my approach to things now. I also have to say that learning from John King about sheer dedication to defining your goals about success helped teach me to be dedicated to my music and helped me to go for my music career and not give up.

ArtsATL: When did you actually compose your first album?

Burke: Right about the end of college is when I composed my first album, Synesthesia. That was in 2011 — when it really all started.

ArtsATL: Tell us about creating your new Grammy-nominated album, Orogen.

Burke: I’ve always loved listening to orchestral music and the composers who built big movements into the piece. I want to listen and hear motif underneath. So my approach to Orogen involved a lot of melodic experimentation and psychological experimentation. I wanted to be technically challenged and I accomplished that. I knew I wanted to do an album with ten pieces which would all be unique, all simple but all somehow be connected. I knew I wanted to play with the melody and have it keep building like an underground force building — note by note. I knew I wanted a melodic theme and I knew I wanted it to be about nature. That’s how I came to name it Orogen.

ArtsATL: The name of the album has its own story?

Burke: Yes. A lot of people thought I just spelled Oregon wrong (chuckles). But yes, once I knew I wanted the melodic theme to be about nature, I did a lot of research and decided that it would be about Orogen, which is a region of the Earth’s crust where mountains are formed. At the crust, there are tectonic plates pushing, forging and causing — over time — these formations in the ground we call mountains. I knew that was the feeling I wanted to build throughout the album in little chunks like mountains revealing in the body under the ten pieces.

ArtsATL: How do you think this album was able to capture a Grammy nomination?

Burke: The piano is a massive instrument and it also has a big sound. I wanted this album to be about powerful, finger-breaking music. And I went for it. I wanted it to be complex but have the ability to connect with the listener who wasn’t necessarily a musician or possessing a trained ear. I wanted anyone to be able to hear the melody and enjoy it and get what I was doing. Apparently, enough people do like it and it got the nomination.

ArtsATL: Describe the feeling of the nomination?

Burke: Being shoved into the front of a limelight, which is very scary and also very exciting.

ArtsATL:  Do you have an acceptance speech prepared?