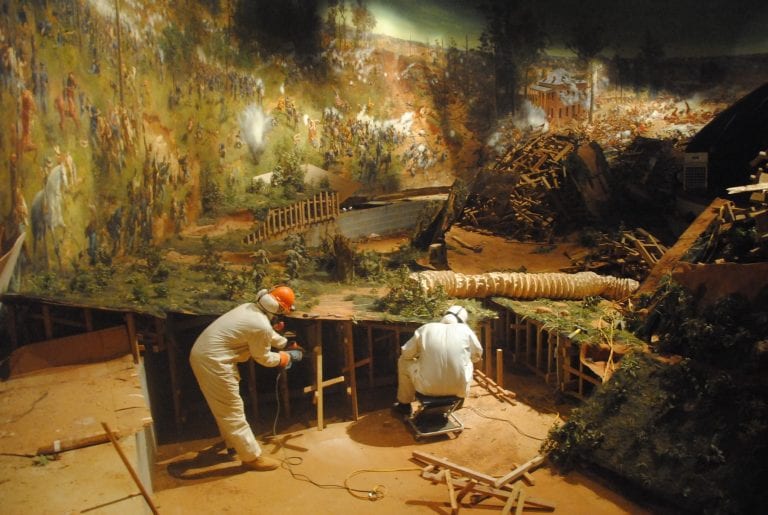 News: “The Battle of Atlanta” begins its move from Grant Park to the Atlanta History Center today

After years of discussion and intense planning, The Battle of Atlanta is making the transition from its home of nearly a century in Grant Park to the Atlanta History Center. The painting will be housed in a custom-built 23,000-square-foot Lloyd and Mary Ann Whitaker Cyclorama Building. Its move will begin today. 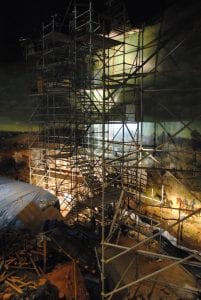 This marks a historic moment for the city. There’s only one other cyclorama painting in the United States — in Gettysburg, Pennsylvania. The relocation of such a massive work, which stands 42 feet tall and 359 feet in circumference, is no small engineering feat. Currently, the painting is rolled onto two 45-foot-tall, 6,200-pound custom-built steel spools. In total, the removal and relocation of the work will take two days. First, the steel spools will be lifted out of the roof of the Grant Park building by a crane through two 7-foot-diameter holes cut into the building’s concrete roof. From there they will travel to Buckhead via flatbed trucks and hoisted into the new building through an opening in the roof. Due to the security and risk concerns of such an undertaking, both sites will be closed for public safety during this time.

Over the next several months, the painting will be unscrolled in its new home for a full restoration, including the re-creation of seven feet of sky across the top of its full circumference. The full cyclorama experience, complete with the addition of the restored 1856 Texas locomotive and enhanced interpretation and exhibitions, is projected to open in fall 2018. The building is being constructed to meet appropriate museum-quality standards, maintaining the proper environment for conservation of the historic painting after restoration. For instance, climate controls have been engineered to maintain a consistent temperature of 70 degrees with a humidity level of 50 percent at the bottom and top of the painting. The larger building also allows The Battle of Atlanta to be fully extended to assume its natural hyperbolic shape, via natural tension applied at top and bottom. A viewing platform rising 12 feet from the gallery floor will give viewers the sense of being enveloped by the 360-degree experience as they take in its full breadth from the horizon line at 17.5 feet.

The Battle of Atlanta is one of only 17 surviving cycloramas worldwide dating from 1880 to 1920, when this mix of entertainment and art form first became popular. Cycloramas predated Hollywood talkies and are sometimes described as the 3-D IMAX movies of their time. Of the 11 still exhibited, only three are in North America: The Panorama of Jerusalem in Quebec, The Battle of Gettysburg in Pennsylvania, and The Battle of Atlanta. Created at the American Panorama Company in Milwaukee by German artists, the Atlanta painting is the only surviving cyclorama composed and painted entirely in the United States.

Mayor Kasim Reed announced the relocation of the cyclorama painting in July 2014, on the 150th anniversary of the Battle of Atlanta. The Atlanta History Center, a nonprofit cultural institution that celebrated its 90th anniversary in 2016, entered into a 75-year license agreement for the relocation and long-term preservation, restoration and maintenance of the painting, the Texas steam engine and other artifacts.

Seeded by a lead legacy gift of $10 million from Atlantans Lloyd and Mary Ann Whitaker, the Atlanta History Center has raised $35.2 million for the project, including $10 million for an endowment that ensures the ongoing care and safekeeping of The Battle of Atlanta painting and the other objects from the Grant Park Cyclorama over the 75-year agreement.

The Battle of Atlanta first opened to the public in Minneapolis in 1886 as a tribute to Northern victory and was moved to Atlanta in 1892. In the nearly 125 years that it has been on display in this city, it has been the subject of periodic reinterpretation. At times it was held up as a proud symbol of the capital of the “New South” rising from the ashes of Sherman’s destruction. It has also been viewed as an anachronism because of its interpretation associated with the philosophy of the “Lost Cause” and white supremacy.

“These shifting viewpoints are precisely what make The Battle of Atlanta such a distinctive and important artifact. No other object can so vividly tell the story of how attitudes toward the Civil War have been shaped and reshaped over the past 150 years,” Atlanta History Center president and CEO Sheffield Hale said. “When combined with our extensive Civil War collections, expert staff, and educational programming capacity, The Battle of Atlanta will become one of the best tools in the nation to demonstrate the power of the use and misuse of historical memory.”

The Atlanta History Center will utilize a multitude of resources to interpret the painting, not only in the context of a single battle, but in a national context of a country divided by war. This interpretation will consider the role of slavery in the Civil War, detailed military questions related to the country’s deadliest war, and the impacts of the conflict on American history. Reconstruction, segregation, the Civil Rights Movement and a number of other social and political watersheds will be explored.

“The Atlanta History Center is a place where differing viewpoints about the past are welcomed, revealed, and discussed — and we are ready to bring the Cyclorama into that conversation,” said Ernest Greer, chair of the History Center’s board of trustees and co-president of Greenberg Traurig. “The Battle of Atlanta painting can be treated, appropriately, as an artifact with lessons to teach us, not as a mere tourist attraction.”

Atlanta History Center restoration plans call for the re-creation of a six-foot-wide section, extending the full height of the painting, which was trimmed when it was moved to its current Grant Park facility in 1921. Though the building was designed and constructed to accommodate the full painting, an adjustment had to be made due to either mathematical error or oversight when the painting was discovered to be slightly too large to fit. Seven feet of sky — which disappeared from the top of The Battle of Atlanta incrementally when it was moved from its premiere city of Minneapolis to Indianapolis and Chattanooga and then three Atlanta locations — also will be recreated.  The painting will grow from 359 to 371 feet in circumference, and from 42 to 49 feet in height.

The 128 plaster figures that are the focal point of the painting’s diorama, created as part of a Works Progress Administration project in the mid-1930s, also will be restored. Included among the soldiers will be the popular one of a dead Union soldier resembling Clark Gable, added by Mayor William B. Hartsfield after the Gone With the Wind star reportedly remarked during a 1939 visit in connection with the film’s world premiere that there was only one thing wrong with the painting: “I’m not in it.”

The move of The Battle of Atlanta will complete more than a year and a half of intense planning for the relocation by Atlanta History Center project leaders, vice president of properties Jackson McQuigg and senior military historian Gordon Jones. They have worked hand-in-hand with an Atlanta-based team of architects, engineers and contractors, as well German, Swiss and American conservators, some of whom have worked on the conservation of panoramic paintings in Europe.

“The greatest value of this project is the historical significance of The Battle of Atlanta painting and how it has been viewed and interpreted throughout history,” said Jones. “The Cyclorama has much to teach us. It tells a story that extends well beyond the Civil War. In fact, it is the largest single artifact in existence to best tell the story of how the Civil War has been remembered, used, misused, forgotten, and interpreted over time. Literally and figuratively, it’s one of the biggest artifacts in the country, and its subject, and home, is Atlanta.”