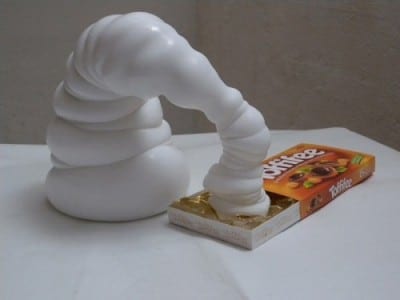 Editors’ note: A well-known critic, poet and Art Papers staff member, Jerry Cullum has been a keen observer of the metro Atlanta arts scene for decades. With this review, we welcome him to our site. — Pierre and Catherine

Venske & Spänle, whose fluid-seeming stone carvings don’t behave like “proper” stone, are showing at Marcia Wood Gallery through February 13 alongside Susanna Starr, whose astonishingly thin wood veneer sculptures behave more like the lace doilies that inspire them than like wood. But the young German couple’s work deserves to be discussed in terms of its story, and their own, as much as in terms of its unusual approach to its materials. Venske & Spänle (they use the “&” instead of the now-trendy “+”) have journeyed widely with their mission to make stone sculpture both smart and adorable. In the last couple of years, members of their family of cartoon-like stone creatures have showed up on a boat on the Congo at Brazzaville, in a schoolyard in Munich, and on a genuinely remote Pacific island in Vanuatu. They (the sculptures and the artists) were greeted with delight everywhere they went, museums included.

Julia and Gregor  — if I may be so informal — go all out to make a historically dignified and typically macho sculptural medium into something as playful as possible. Baby in tow, they arrived in Atlanta full of travelers’ tales, and carrying a body of new work that marries their whimsically named stone figures with objects that are icons of the two artists’ childhoods. One creature (“Helotroph Drupi”) melds with a child’s cassette player that bears an Italian brand name, Mangianastri, that we are told means “Tape Eater.” Another lovingly snuggles with a bottle of liqueur associated with Venske’s grandparents. A third digs into a box of cheap, sticky chocolates that kids adored a couple of decades ago and mothers hated. (See above.)

This version of intimate domesticity is at the opposite extreme from Venske & Spänle’s recent project to subvert traditional monumental sculpture. At the invitation of an Italian stone yard, they created an immense figure (currently seeking a good home) that towers over its surroundings like a huge, inquisitive, friendly worm. We can see such projects only in photographs, but the toffee- and tape-player-loving creatures that Venske & Spänle call “helotrophs” are currently in residence in the gallery, along with Starr’s sculptures (see below).