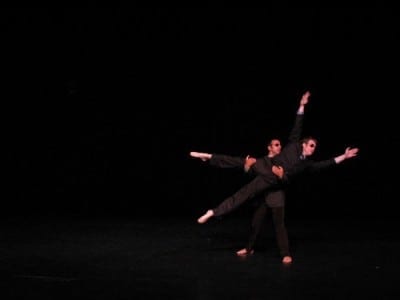 Preparing for Staibdance debut with choreography by Catellier & Staib and more

Rehearsing to Minimalist composer Steve Martland’s driving pulse and surprising rhythms, wide swaths of movement incite a feeling of pure kinesthesia. Relishing motion, gravity, rhythm and space, a broad-shouldered Catellier and dancers bank around curves, sail through turns, skid down across the floor and rise buoyantly to their feet. It will be Staib and Catellier’s fourth concert collaboration — the first to be held outside of Emory, and the first under the new company name (and non-profit status), “Staibdance.” Staib, who handles publicity for the company, describes the work as “intensely physical, tenaciously musical, and potently emotional.” Catellier designs lighting for the concert.

Taking a break from the rehearsal, Catellier explained how he and Staib collaborate. “We choreograph differently, have different aesthetics, different modes of choreography, different processes. They complement one another.” For this concert, each choreographer has pushed himself out of the comfort zone by deliberately “doing the opposite” of convention or habit. This week, Catellier discusses how a departure from story-driven work has given him a fresh angle on choreography. Next week, Staib will share insights on his emotionally riveting, autobiographical new work.

Catellier has relinquished his affinity for narrative with “The Stars are Bright…” focusing instead on patterns — of counts, of canons and of unison to non-unison configurations. This formal way of working gives way to a pure, enjoyable, physical, musical, kinesthetic experience. “I wanted to find moments where people connect,” Catellier explained. “I want the audience to come away not so much as if they witnessed a dance as a gathering of people.

Musically, Catellier works contrary to a typical approach, where a choreographer would start slowly and build to the faster section. Instead, Catellier begins with a fast section and ends more slowly, as if with a contented sigh. “I wanted to evoke…the (initial) excitement of a party,” Catellier explained, “and how it settles after a while, and it dissipates.” Catellier will also present an all-male quintet, “Together We Travel,” to J.S. Bach’s Chaconne from the Partita No. 2 in D minor. Staib will join Catellier in a duet to François Rabbath’s “Reitba” for double bass and piano.

Watching the rehearsal, there’s a sense of comradery as this gathering of Atlanta-based professional dancers work out details in the choreography. It’s clear that rehearsing is as much a social experience as an artistic endeavor.

Several dancers are part of a recent influx of talented, skilled dancers from the distinguished graduate and undergraduate dance programs at Florida State University. Also dancing are a few Emory graduates, a couple of members of the local contemporary company, Several Dancers CORE, and one college dance department director.

Many have chosen Atlanta’s burgeoning dance community over more crowded dance environments in cities like New York and Chicago. And some are also emerging choreographers. To help them along, Staib and Catellier have invited six of these dancer/choreographers to present work in a separate program, the Independent Choreographers Exchange, or ICE.

Choreographers Joel Ballard, Emily Cargill, Corian Ellisor, T. Lang, Ellen Lyle and Kathleen Wessel will show works in the ICE concert at 7 Stages on Saturday afternoon and Sunday evening. Funded by Emory, “The Dance Project” is a rare opportunity for Staib and Catellier to bring their work to the Little Five Points theater.

Next year, chances are they’ll be back in Emory’s spacious black box theater in the Schwartz Center. But using the off-campus venue helps attract a different group of people. “We have a suspicion there’s a dance audience that doesn’t come to Emory because they expect to see student dancers and student choreographers,” Catellier explained. “We all [Staib, dance program director Anna Leo and other Emory dance faculty] create work for professional dancers here.

“But if we do a performance at 7 Stages, hopefully, they’ll follow us back to Emory.”