Review: Sexy and a little too ripe “Canterbury Tales” at Shakespeare Tavern

Lust, drunkenness, greed, revenge, pettiness, violence and, oh, what the hell, more lust. If Geoffrey Chaucer were around today, he’d have a development deal for an HBO series.

Even though his “Canterbury Tales” was written in the 14th century, it sports a sensibility instantly recognizable in today’s tabloid culture. Atlanta’s New American Shakespeare Tavern has dusted off its version of the “Tales” — actually the adaptation John Stephens did for Theatre Gael a decade ago, and which the Tavern revived last year — for another run of ribaldry. Some fine moments and performances do battle with some inherent problems, and the result is close to a draw, or perhaps a narrow victory for the stuff that works. The show runs through Jan. 31. 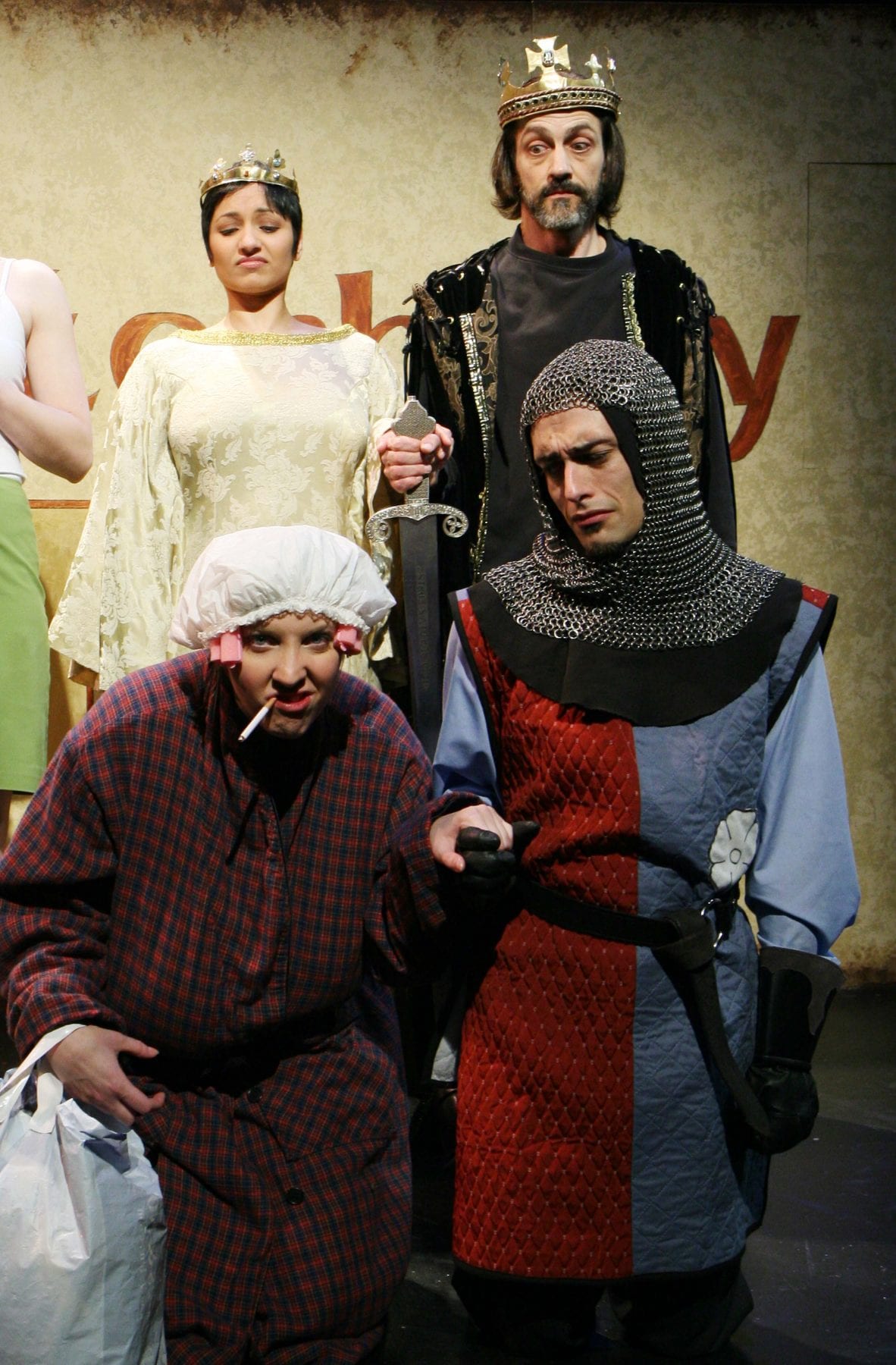 Stephens updates Chaucer’s Middle English into a springy modern verse that flows very well. He has pared down Chaucer’s 24 tales to six, plus the prologue, and could probably have pared a little further.

He focuses mainly on the stories that have titillated readers over the centuries, bookending the show with “The Miller’s Tale” and “The Reeve’s Tale,” both of which combine amorous young men, willing wenches, foolish husbands and slapstick. (Note to parents: The show is naughty, but fine for teens; trust me, they are exposed to much worse.)

The staging itself is one of the problems. The Tavern’s stage is dominated by a large wall, with a couple of pop-open windows, like the ones on the old “Laugh-In,” but Stephens never figures out how to utilize this massive prop to its best effect. With nine players performing more than 50 roles, there are a lot of quick costume changes, hence down time, and it’s filled by puppets that cavort atop the wall. The puppets are supposed to be like Terry Gilliam’s interstitial animations on “Monty Python’s Flying Circus,” but they’re mostly tedious, and the down time remains just that. When the puppets are put away and the actors come out to play, there’s a lot to enjoy.

Laura Cole is Allison, the object of three men’s desire in “The Miller’s Tale,” and she’s both sexy and a little too ripe — a medieval hot mess. Mary Russell is a hilariously repulsive old crone in “The Wife of Bath’s Tale,” channeling some Billy Crystal schtick and hacking up phlegm like a swine flu ward, to the audience’s disgusted delight. As Chanticleer the rooster in “The Nun’s Priest’s Tale,” Mike Niedzwiecki milks every cock joke in the script to the last drop.

On a much quieter note, Matt Felten’s Pardoner (a seller of religious relics) is memorably creepy. The other actors — Rivka Levin, Amee Vyas, Nicholas Faircloth, Drew Reeves and Maureen Yasko — also get to shine.

In addition to the wall and the puppets, “Tales” makes a big misstep in act two with “The Franklin’s Tale,” which is a more traditional story of courtly love. Played both seriously and in spots for chuckles, it feels terribly out of place amidst the overall bawdiness of the rest of the show, and goes on way too long. The players redeem themselves at the end, however, with “The Reeve’s Tale,” a bed-hopping farce that is done as a Spaghetti Western, complete with a ridiculously over-the-top gunfight at the end, choreographed like a slo-mo Sam Peckinpah scene. It’s the furthest this “Tales” strays from the original text, and the tale that works the best, which could be a hint on what direction to go if they decide to revise the show and do it again next year.