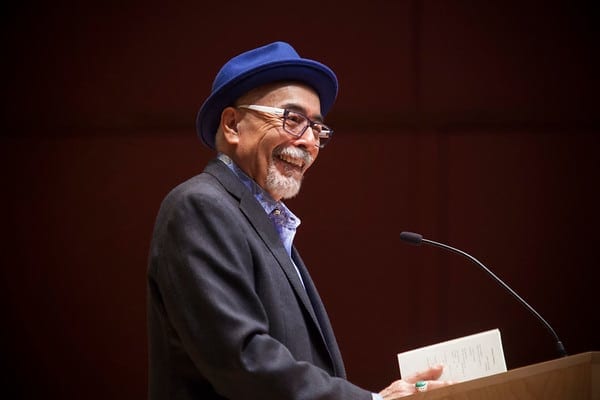 In the soft, amber light of the Schwartz Center for Performing Arts, Juan Felipe Herrera, now serving his second term as U.S. Poet Laureate, stands before a diverse cross-section of the Emory University and Atlanta communities like a sage composer, calmly and confidently repeating to the audience, “Let us gather in a flourishing way.” This beautiful refrain is Herrera’s poetic call-to-action, a prayer-like anthem urging our shared recognition as human beings. For Herrera, the nation’s first Chicano poet laureate, this coming together in the name of poetry and freedom is more important than ever. Poetry is an “attempt to break through all the silences,” he says, noting the political and personal consequence of creative thinking. But this push against silence is also a way of describing Herrera’s engaging performance, as he called to the audience to recite his poems along with him in multiple languages, to laugh, and to feel the immense significance of poetry’s role in our world.

Herrera’s moving poems were the highlight of the event, from his earlier work in the 1970s, written while he was involved in the Chicano civil rights movement and community organizing, to his recent poems “I Will Luv U 4Ever, Orlando” and “Poem by Poem,” which rail against gun violence and honor the victims of the mass shootings at the Pulse nightclub in Orlando and the Emanuel African Methodist Episcopal Church in Charleston, respectively. These are necessary, irreducible American poems, offering a vision of resilience and complicated hope shared by American poets from Walt Whitman to Amiri Baraka.

Herrera’s newest poem, “America, Stop Deporting Us,” which he noted that he had just finished, was the most palpably thrilling poem he performed. Articulating a lineage of national resistance, love and inclusivity from Allen Ginsberg to Otis Redding to Carmen Giménez Smith, Herrera’s incantatory litany of questions and grievances to a personified, power-hungry America repeatedly brought the audience to roaring applause. “America, you need to major in American Studies!” he proclaimed ecstatically. The current crisis around immigration and refugees was everywhere apparent in the poem, as Herrera called the nation to answer for the ongoing limiting of human rights: “America, how about writing a poem instead of an executive order?”; “America, stop making criminals without a crime”; “America, I’m still migrating into you.” After reading the poem he noted bluntly that national borders are “a sickness,” an uncompromising description that was the most poignant statement of Herrera’s reading. Herrera is a terrific performer, involving his audiences directly in the recitation of his poems, transforming the audience into a participatory, democratic community of language learners. His disarming first question to the audience, “Do you want to participate a little bit?” set the stage for our shared involvement. Herrera reads many of his poems simultaneously in Spanish and English, alternating between languages line-by-line to create a bilingual musicality, and in this movement between languages Herrera asks the audience to collectively recite along with him the Spanish lines and phrases they may or may not be familiar with, bringing everyone together in texture and sound of one of America’s most common languages. It was astounding to hear the entire audience reciting lines of poetry in multiple languages, bringing out all of the different intonations and particularities of our voices as we joined in a dialogue not only with Herrera’s poems but with one another. Herrera so often asked us to recite lines together that I started to notice audience members near to me softly repeating words and phrases from his poems, but unprompted, as they experimented with sounding out the images and juxtapositions of the poems. He had so successfully brought everyone together in his serious and playful use of language that we were eager to continue engaging with it. The audience even called for an encore after his final poem, which Herrera charmingly obliged by flipping through the pages of one of his books and reading three lines each time the audience called out for him to stop on a page, prompting us to make our own poem out of his work. We had become the creative, active community Herrera’s poems promise us is possible.

Check out his most recent collection, Notes on the Assemblage, published by City Lights in 2015, to begin your own dialogue with Herrera’s electrifying work. Find more information on Herrera’s communal poetry projects as Poet Laureate, including “The Technicolor Adventures of Catalina Neon” and “Wordstreet Champions and Brave Builders of the Dream,” at the Library of Congress.