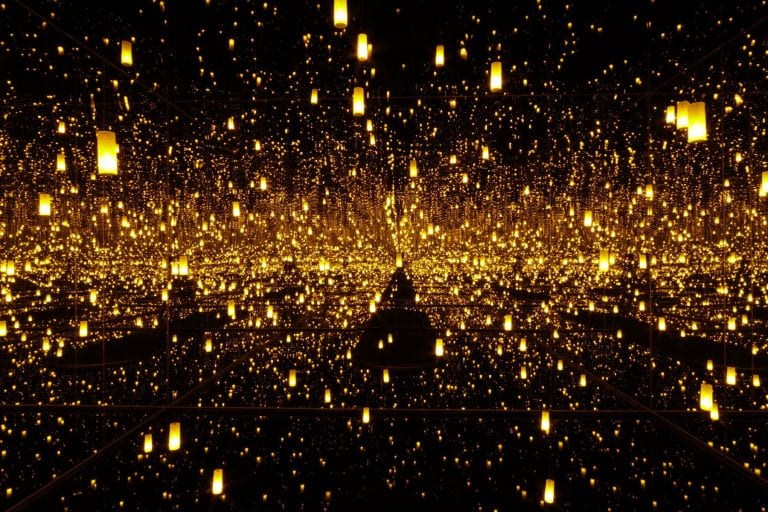 The High Museum of Art will be joining the national tour for Yayoi Kusama: Infinity Mirrors, the first survey exhibition to explore the evolution of the celebrated Japanese artist’s immersive Infinity Mirror Rooms. Organized by the Hirshhorn Museum and Sculpture Garden, the Smithsonian’s modern and contemporary art museum, the exhibition will be on view at the High from November 18, 2018 through February 17, 2019.

Yayoi Kusama: Infinity Mirrors provides visitors with the unique opportunity to experience six of the artist’s Infinity Mirror Rooms — her iconic kaleidoscopic environment — as well as additional large-scale installations, sculptures, paintings, works on paper and archival photographs and films from the early 1950s through the present. The exhibition features numerous new works by the 87-year-old artist, who is regarded as one of the most influential artists of the 20th century and is still very active in her Tokyo studio. New works include vibrantly colored paintings and the recently completed infinity room, All the Eternal Love I Have for the Pumpkins (2016), featuring dozens of Kusama’s signature bright-yellow, dotted pumpkin sculptures.

Spanning the entire second floor of the High’s Wieland Pavilion, the exhibition will allow visitors to take a once-in-a-lifetime journey through more than 60 years of Kusama’s creative genius. The exhibit will begin with the artist’s original landmark installation, Infinity Mirror Room—Phalli’s Field (1965/2016), featuring a vast expanse of red-spotted white tubers in a room lined with mirrors, which create a dazzling illusion of infinite space.

The exhibition will also include Infinity Mirrored Room—Love Forever (1966/1994), a hexagonal chamber into which viewers peer from the outside to see colored flashing lights that reflect endlessly from ceiling to floor. The work is a re-creation of Kusama’s legendary 1966 mirror room “Kusama’s Peep Show” (or “Endless Love Show”), in which the artist staged group performances in her studio.

Kusama’s signature bold polka dots will be featured in Dots Obsession—Love Transformed into Dots (2007), a domed mirror room surrounded by inflatables suspended from the ceiling. The artist’s more recent LED environments, filled with lanterns or crystalline balls that seem to extend infinitely, will be represented in Aftermath of Obliteration of Eternity (2009) and Infinity Mirrored Room—The Souls of Millions of Light Years Away (2013).

“Kusama’s Infinity Mirror Rooms open onto places within the imagination that are beautiful and transcendent. Like sensory deprivation chambers, they leave the viewer grappling to reconcile the totality of the cosmos with a sense of microcosmic infinity within the body,” says Michael Rooks, the High’s Wieland Family curator of modern and contemporary art. “It is an enormous privilege to present this foundational work by Kusama.”

Also on view in the exhibition will be a selection of more than 60 paintings, sculptures and works on paper, including many of Kusama’s infrequently shown collages, which she made after returning to Japan following a stay in New York City from 1957 to 1973. These works trace the artist’s trajectory from her early surrealist works on paper, Infinity Net paintings, and Accumulation assemblages to recent paintings and soft sculptures, which highlight recurring themes of nature and fantasy, utopia and dystopia, unity and isolation, obsession and detachment, and life and death.

The exhibition will conclude with Kusama’s iconic participatory installation The Obliteration Room (2002), an all-white replica of a traditional domestic setting. Upon entering, visitors will be invited to cover every surface of the furnished gallery with multicolored polka dot stickers to gradually engulf the entire space in color.