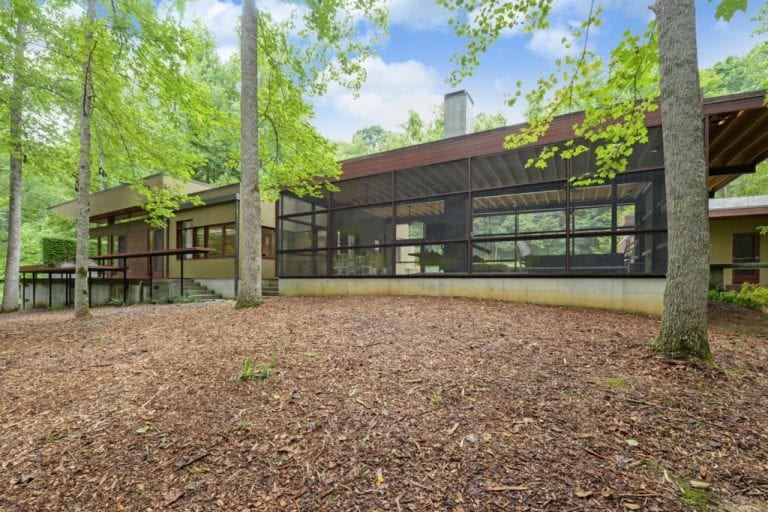 The rolling hills of North Georgia are just two hours north of Atlanta, but the dense woods covering the forever undulating landscape feel a world away.

A drive up Interstate 85 to 985 and onward toward Rabun Gap transports you from bustling city, through the suburban sprawl of Gwinnett County, before depositing you among the forests, in the foothills of the Appalachian Mountains.

Here, you would expect to get away to a mountain retreat that is something homey, a log cabin or cozy cottage. And a quick search of Airbnb around the mountain town of Dillard confirms, with dozens of properties fitting the vision, ready to welcome visitors for a long weekend. 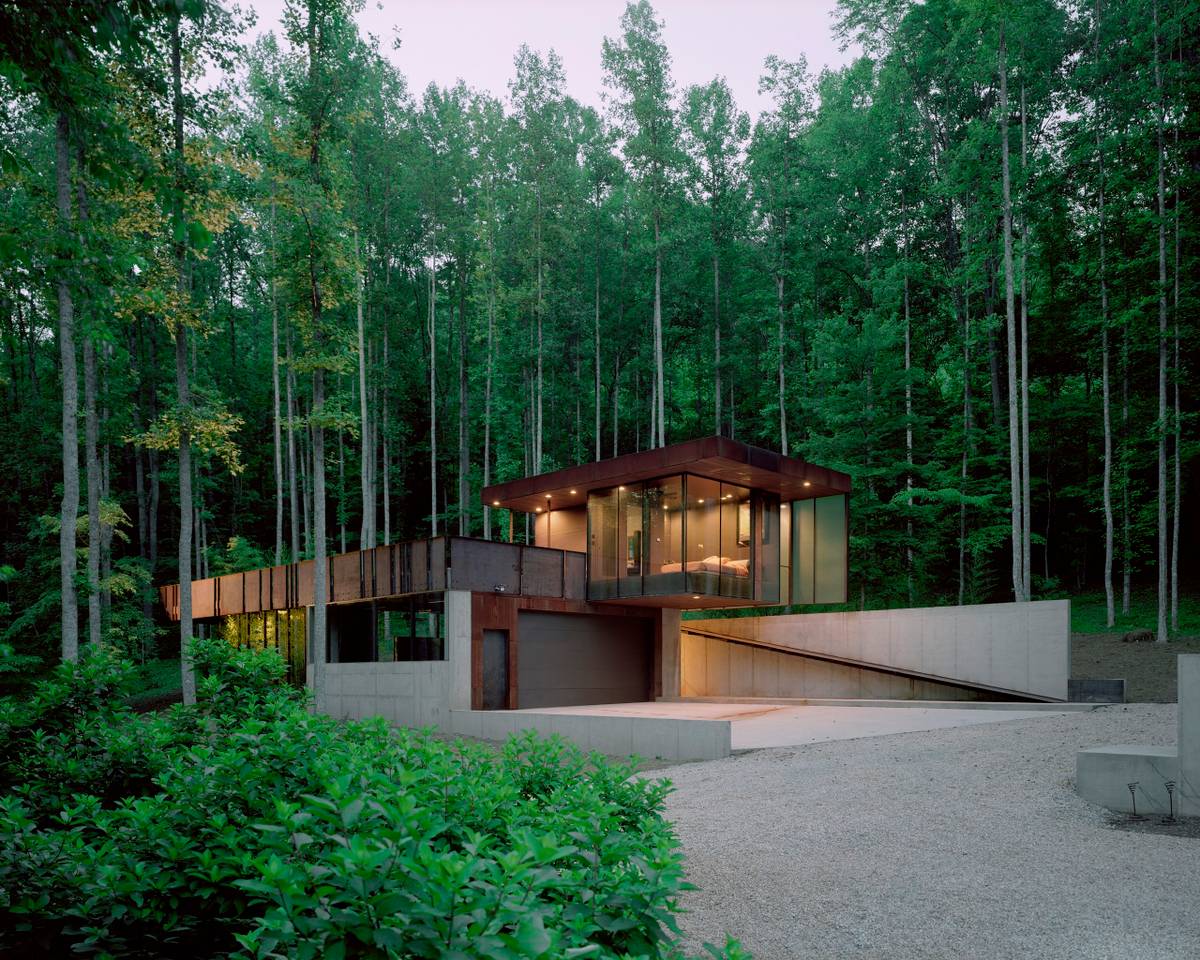 In the early 1990s, long before Airbnb was even a concept someone would dream up, an Atlanta couple with a large plot of land in Rabun Gap wanted to build a mountain retreat. Rather than the quintessential cozy cabin — perhaps a simple weathered wood box with a brick chimney or an A-frame home with shingled roof forming the walls — the couple sought something a little more avant-garde.

At the recommendations of friends, the couple — Marchant and Ron Martin — sought out the assistance of a small Atlanta-based architecture firm: Scogin Elam and Bray Architects.

The firm was a relatively new addition to that Atlanta architectural scene. In the mid-1980s, founding principals Mack Scogin and Merrill Elam had left the long-established Atlanta firm Heery International to start their own firm. Along with Lloyd Bray, the duo had received many small commissions for houses around the Southeast, as well as two libraries in metro Atlanta, but had yet to make their big break. 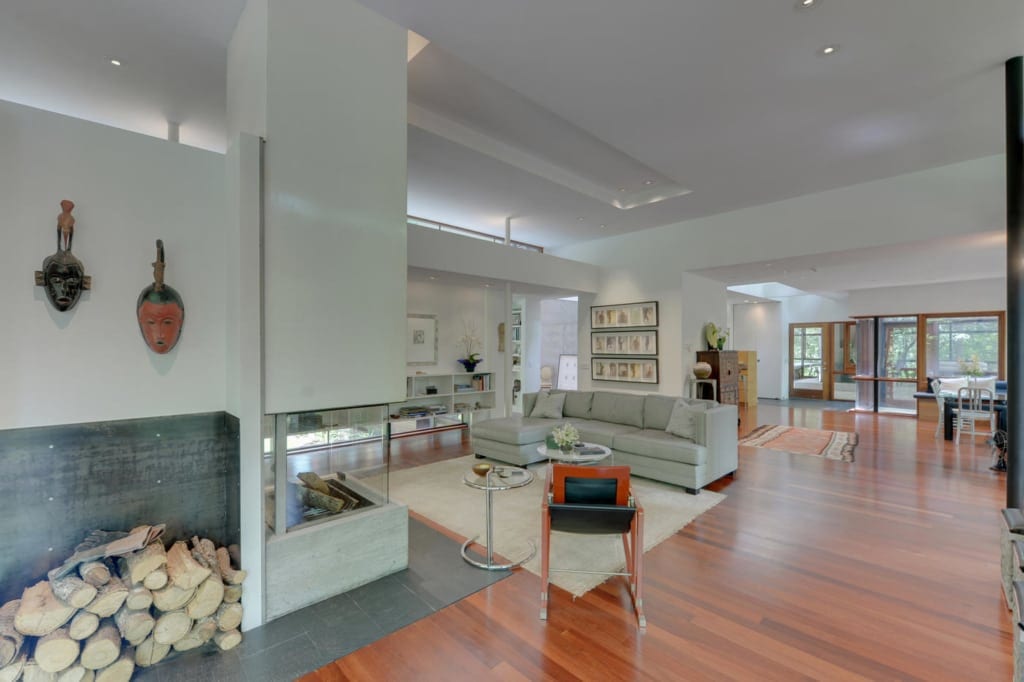 In the design, the firm was given carte blanche to create a retreat that would echo its surroundings while respecting the natural assets of the site: the poplar woods and a small creek.

The result was an ultra-modern construct of concrete, glass, steel and a muted-green stucco, including the main house with a large screened porch, with a small guest house and garage across a broad, rocky court. According to Scogin and Elam, the house was envisioned as “a dialogue about the relationship of the natural to the manmade.”

The Martins were more than pleased with the house. Marchant described working with Scogin and Elam as “an honor,” and Scogin pointed out that they remain good friends with their former client to this day.

Within a few years, the couple had outgrown the main house and asked for the garage to be converted into more residential space. The move necessitated the creation of a second garage with guest accommodations, above which would come to be known as the “Tree House.”

Perhaps the most powerful architectural statement on the property, the Tree House utilizes glass and concrete, but with the addition of Corten — a self-rusting steel product that weathers to a red-black finish. The bedroom is boldly cantilevered from the garage structure, leaving visitors floating above the property, among the surrounding trees.

While the architecture is unique, it is meant to serve nearly as a backdrop, framing the woods and mountains with natural materials. However, the true success of the home is found within.

Mack Scogin and Merrill Elam have come to be regarded for their detail — the small moments in a building that are finessed beyond what is found in most design. The Mountain House is no different. 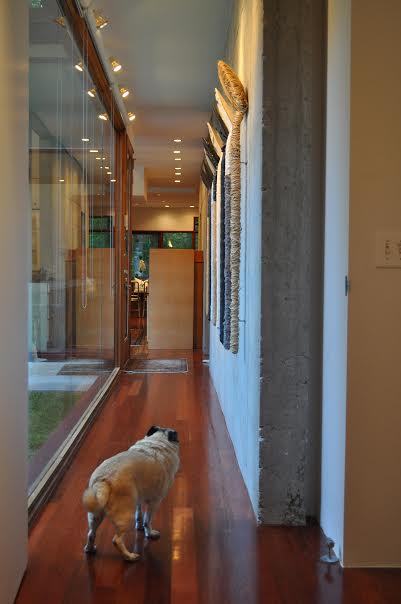 Often it takes time to discover and appreciate the attention paid to design, and how it enhances the day-to-day experience in the house.

In the case of the Mountain House, the details are subtle and noticed only upon experience: a rotating wall, meant to divide a private sitting area from the main living space, lacks a physical threshold — but a simple line in the slate floor marks where the wall should stop. The windows in the bedroom are placed at the right height for someone reclining in bed to look out and survey the natural surroundings. In the entry hall, the door to the bedroom is offset to obscure its hardware, making the master bedroom essentially hidden from public view.

While some decisions were functional, others were meant to heighten the experience for visitors.

On the expansive porch of the Tree House, the slate tiles comprising the floor are left loose on the framing, allowing them to shift and move underfoot. The noise created by the rocking as one walks on the porch is unique and deliberate. A visit here is meant to be a multisensory experience.

However, where design was nuanced and finessed, it was sometimes at the expense of functionality, as creative design trumped pragmatism. With the particular detail and exacting intentions of the architects, the battle of pragmatics and aesthetics is also on full display at the property.

The main house features an expansive screened porch, intended to take advantage of the accommodating climate of the mountains. As a statement, the wooden frames holding the screens were hung from the structure above, highlighting the use of an impressive cantilever, which created the room.

Of course, the purpose of a screened porch is to keep bugs and animals out of the outdoor living space, though the architects desired to accentuate the unique structural condition by leaving a gap between the bottom of the frame and the low stone wall. When the original owners discovered the architects’ intentions, a compromise was reached, with frameless glass filling the gap left between the bottom chord of the screen frames and the wall.

In the bathroom of the Tree House, Scogin and Elam wished for the large Corten door to swing outward onto the patio, allowing for a semi-outdoor shower experience. But, again, with bugs being a concern, an inward swinging screen door was also necessary. To allow for the main door to swing out, the architects had to design a small access door within the screen door to afford those inside the house the ability to open the exterior door without opening the screen door.

The aggregate of the aesthetic decisions, and their impact on the functionality of the house, resulted in the final realized design, which meets both needs.

From private residence to showpiece 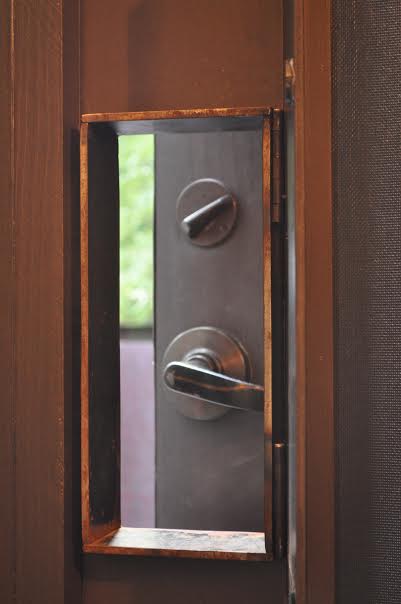 After the home was purchased by the current owners, Steven Bennett and Chester Old, they decided to share the once-private retreat with others. Through Airbnb, the couple was able to open up their home to guests — most of whom were drawn by the architecture.

When they moved into the Martin’s old home, Bennett and Old sought to bring back the luster of the structure, which had faded over two decades of use. In the last two years, the houses were restored to their original grandeur, with polished wood floors and distinct minimalism, highlighting the surroundings over the architecture itself.

The Airbnb reviews speak volumes about the experience, with five-star ratings across the board. Visitors leave comments describing the home as “magical,” “a work of art” and “stunning.”

Now, the couple is hoping to find a new owner who shares their passion for the unique houses in the woods.