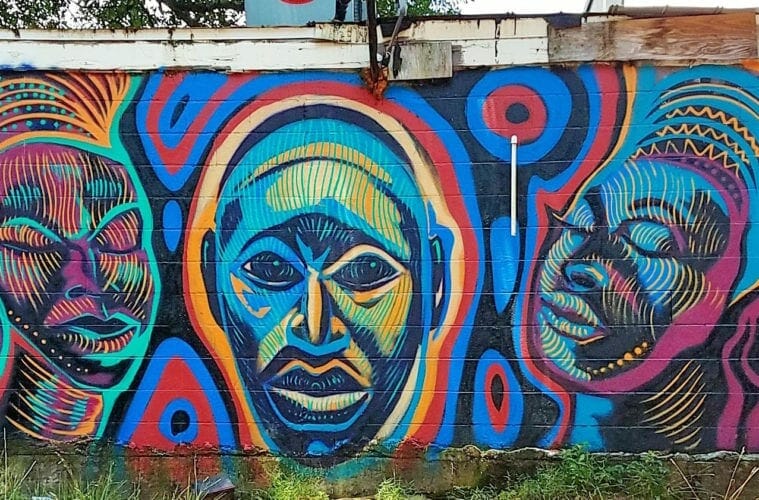 This Corey Barksdale mural, perhaps his latest, is on the back side of the Valero station at 600 West Howard Avenue in Decatur. The African masks are meant to connect the gentrifying neighborhood to its former spirit.

Corey Barksdale grew up in Nashville, where his mother’s fastidious attention to detail and his grandmother’s quilts inspired him to choose art. “I used to watch her create quite a bit,” he says of his grandmother, “and she was really inspiring with the images she created.” Barksdale’s Atlanta murals are characterized by bright colors and strong ties to community and identity.

“At one point I thought I wanted to do architecture,” he says, “but I think that was just different people encouraging me to do architecture because they thought it would be more lucrative. I’ve always enjoyed people and painting and figures, so when I was about 10 years old, I had an idea that this is what I wanted to do for the rest of my life.” Corey Barksdale says he knew when he was 10 that he wanted to be an artist. (Courtesy of the artist)

Barksdale graduated with a B.F.A. from the Atlanta College of Art in 1994. There he was inspired by the abstract expressionists — William de Kooning, Jasper Johns and Clifford Still. His commitment to his heritage came from such African American masters as Romare Bearden, John Biggers, Aaron Douglas and William Tolliver. “A lot of my images,” he says, “are representative of the experiences that I have had and how I identify myself.” Bold lines and color combinations like those seen in African art. They come up without him trying, he says. Barksdale visited Africa a year and a half ago and noticed a lot of the homes there that use the patterns and colors he favors. “It’s not something that I force to happen,” he says. “It’s just something that’s ingrained in me from my heritage.”

Music also inspires his work, especially in its ability to connect people from all backgrounds. “It’s spiritual,” he says. “It’s something that I think any person in the world can relate to.” This mural, at 2315 Cascade Road SW, went up as part of Elevate Atlanta’s 2018 public art program.

Barksdale’s just finished a mural at the Valero gas station on West Howard Avenue in Decatur. The work depicts African masks and is about remembering and connecting with the ever-gentrifying neighborhood’s former spirit. You can also see Barksdale murals in downtown Atlanta at 85 Peachtree Street SW and 156 Forsyth Street, at 358 West Ponce de Leon Avenue in Decatur and at 2455 Beecher Road in southwest Atlanta.

He’s traveling in Europe right now, where he leaves his mark by doing spontaneous street paintings.