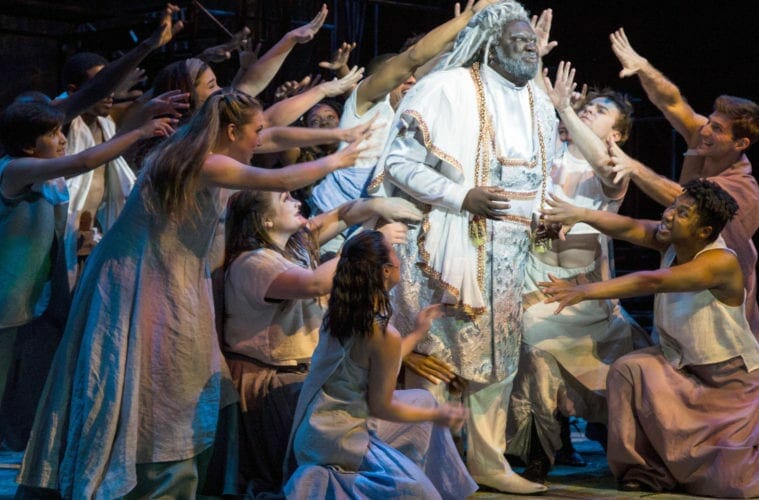 Just his name can elicit near gasps from musical theater fans. Lyricist/composer Stephen Schwartz has written such Broadway hits as Pippin, Godspell and Wicked, and contributed to films such as Pocahontas, The Prince of Egypt and Enchanted. Yet the maestro himself has said that his rarely staged Children of Eden is a personal favorite.

Aurora Theatre’s new version of the musical (running through September 1) might be the first Eden seen in Atlanta. It features one of the more talented casts around, but even the performers can’t hide the truth: Eden works better in theory than in real life.

Schwartz’s show essentially retells the Book of Genesis with a few minor twists and nearly a dozen storytellers as narrators. In Act I, Father (a God-like Brad Raymond in his Aurora debut) watches as Adam (Maxim Gukhman) and Eve (Naima Carter Russell) discover the Garden of Eden. Once the pair has been driven from Eden, they have sons Cain (Russell Alexander II) and Abel (Haden Rider). Act II finds Gukhman as Noah and Russell as Mama. Sons Shem (Alex Harding) and Ham (Rider, again) have wives, but a third — Japeth (Alexander, again) — is displeased with the woman his father favors and falls for a servant girl named Yonah (Briana Young).

Children of Eden features a book by Canadian theater maker John Caird (Les Misérables, The Life and Adventures of Nicholas Nickleby) and focuses on the universal, inevitable clash between parents and children plus themes of loyalty and forgiveness. Caird’s characters, unfortunately, have been crafted without enough detail.

The show, adapted by Schwartz from a mid-1980s production called Family Tree, opened in London in 1991 and closed after a badly reviewed three-month run. It has popped up sporadically since then, most notably in a staging at New Jersey’s Paper Mill Playhouse with Stephanie Mills (The Wiz). It’s been tweaked here and there, with new songs, but remains a bit of a curiosity. Save for a handful of numbers — “Lost in the Wilderness,” “Stranger to the Rain” and “Wasteland” — the score is unexciting.

Like most Aurora musicals, associate artistic director Justin Anderson directs here. His cast is excellent. Best of all is Russell, seen in 2015 in the company’s unforgettable Memphis. She’s quite sympathetic as Eve, especially once she and Adam are banished from Eden, and she excels vocally, especially in the title number, which closes Act I. Raymond brings a wonderful paternal instinct to Father; Alexander shines as two of the sons. Smaller roles are filled with the warm presence of performers like Leslie Bellair and Lauren Hill. Children of Eden is theatrical — Anderson will never make a musical that lacks energy. It’s also the first Aurora Theatre show to use video mapping, and projection designer Milton Cordero’s work adds dimension with imagery supplementing Shannon Robert’s set. Other memorable touches include a snake brought to life by a line of five performers and the pre-flood chaos as people and beasts prepare to board Noah’s Ark.

This Eden just never comes together as it should. One minute two characters will have an intimate moment, and 45 seconds later, nearly 20 ensemble members flood the stage practically doing somersaults in every corner. Tonally, it’s all over the place and much too busy at times. Ricardo Aponte’s choreography, normally contained, is overdone. The production becomes an odd amalgamation of Bible stories, song, dance and over-the-top theatrics, with music that does little more than bridge scenes.

The show is a technical success, from Maria Cristina Fuste’s lighting to Alan Yeong’s costumes and the music direction of Ann-Carol Pence (with a band of seven). Yet in a summer full of top-notch musicals — a superb national tour of Come From Away at the Fox Theatre, a lovely remount of Hair at Serenbe Playhouse and a dandy, just-completed Hairspray at City Springs Theatre Company — Children of Eden is a mixed blessing. It’s reminiscent of Aurora’s 2017 Hunchback of Notre Dame. The show is handsome and lavishly staged, but it likely will be most remembered for its hardworking cast and not its content.