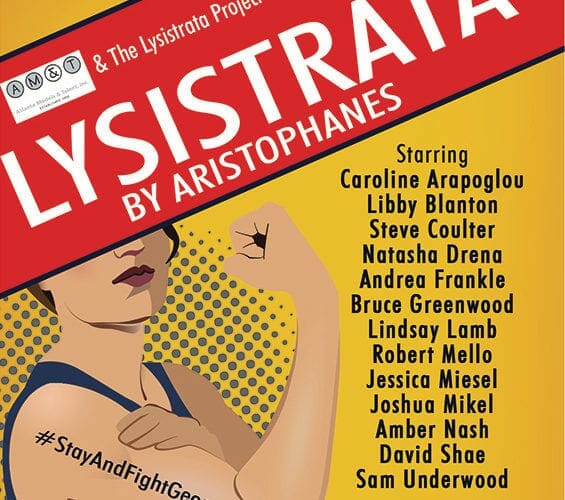 Holofernes runs in repertory with Ben Thorpe’s Babyshower for the Antichrist, which opens August 2. It takes place on the night of an isolated cult’s “hell feast” as members prepare for a birth. There’s also a goat. That talks. The five-person cast includes Gina Rickicki and Suzanne Roush. Shannon Eubanks directs. The drama closes August 25.

The festival returns to the West End Performing Arts Center, 945 Ralph David Abernathy Boulevard. Details, tickets and passes can be found HERE or at 404-212-0815.

A staging of the Greek drama Lysistrata, featuring a fairly starry cast of Atlantans, will benefit Planned Parenthood and the ACLU, organizers say. The event is 7 p.m. Sunday, July 28, at Theatrical Outfit. Hosting the event are Atlanta Models & Talent and the Lysistrata Project, a grassroots collective of Georgia artists and businesses committed to raising awareness and funds for women’s charities affected by HB 481, aka the Heartbeat Bill.

The two-night madness of the One-Minute Play Festival returns to Actor’s Express for its eighth Atlanta season on Sunday and Monday, July 28–29. “Clumps” of actors will perform rapid-fire, 60-minute playlets by more than 60 metro writers. Each participating actor is in multiple pieces. Eleven directors will steer the chaos.

The Atlanta event will be curated and led by D’Andrea and Caitlin Wees. Tickets are $20 and available HERE or at 404-607-7469. The Express is a 175-seat house. Expect this festival to sell out, way out.

Director Kenny Leon’s next New York project is a world premiere titled The Underlying Chris by Pulitzer Prize-nominated playwright Will Eno. It begins previews October 29 at one of Second Stage’s off-Broadway theaters and runs through December 15.

The Underlying Chris is described as a life-affirming, high-spirited look at how a person comes into their identity and how sometimes life’s tiniest moments are the ones that most profoundly change our lives. The piece was co-commissioned by Second Stage and Los Angeles’ Center Theatre Group.

Eno’s other plays include The Realistic Joneses, The Open House and Thom Pain (based on nothing), a finalist for the 2005 Pulitzer Prize. Leon’s New York directing credits include 10 Broadway shows, beginning with A Raisin in the Sun in 2004 and continuing most recently with American Son, which closed in January. Leon will leave Atlanta’s True Colors Theatre in August, the company he cofounded in 2002 and led as artistic director for 17 years.