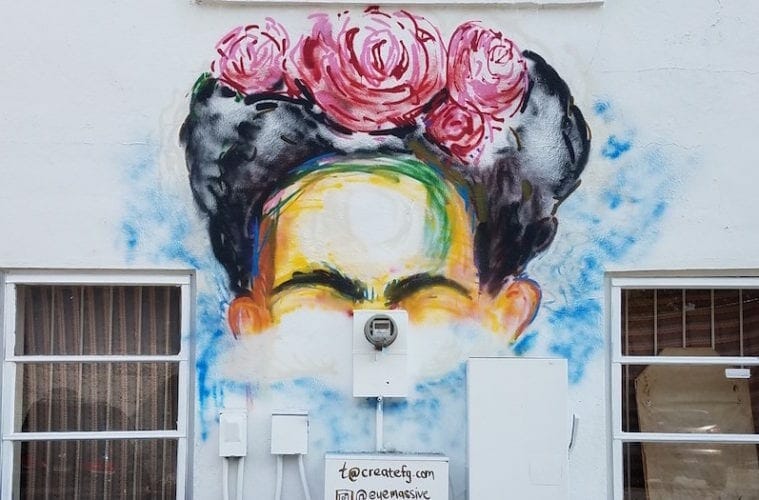 Today in street art: To mark Cinco de Mayo, we give you Frida Kahlo, lots of Frida Kahlo

In her day, Frida Kahlo (1907–1954) was known for work inspired by the nature and artifacts of Mexico. Today, Kahlo images reflect questions of identity, post-colonialism, gender, class and race in Mexican society. “Whether it was a self-portrait or a collection of images within What the Water Gave Me, Kahlo accomplished a creativity unhindered by realism,”ArtsATL critic Stephanie Adrian wrote in October of The Atlanta Opera’s Frida. Now more than a half-century later, Kahlo’s style  is inspiring artists of all kinds, including, not surprisingly, muralists. Kahlo’s aura is on full display at Las Margaritas at Cheshire Bridge (1842 Cheshire Bridge Road N.E.), where at least eight murals of her fill the exterior and interior walls. Each is different in style and theme.

For Mexicans, Cinco de Mayo celebrates a key victory over France in 1862, during the Franco-Mexican War. For Americans, it’s mostly a reason to drink margaritas. Las Margaritas marks the day with a Frida Kahlo mural competition. Because of the Covid-19 pandemic, it did a smaller-scale event this year but still hosted muralists Alberto Gamba, Dominic Kluck and Eder Velasco.

The theme: the most iconic and spiritual vision of Kahlo. ”She is an inspirational artist for people, LGBTQ+, all of which were early for her time,” says Las Margaritas owner Oscar Valdivieso, better known as Papi. “She is the voice for many people.”

We don’t have photos of the newest murals yet, but here’s a look at some of the others and their artists.

Roberto Hernandez (@Robertosartwork) is a Mexican-born illustrator, muralist and body painter. He came to Atlanta at age 12 and graduated from Georgia State University with a degree in drawing and painting. He runs his own company, providing body painting at such events as the Shaky Knees Music Festival and Music Midtown.

Hernandez has painted more than 25 murals in Atlanta, several of Kahlo. “Frida is particularly important for me as a Mexican artist,” he says. “Her color palette is a representation of the world and Mexican culture. The Mexican palette is rich in color, like a piñata — your eyes don’t know where to look because there is so much happening.”

He’s impressed by Kahlo’s relevancy today because her life was so branded — as a female in a male-dominated time. “She isn’t one to be messed with,” Hernandez says. “I saw several of her pieces up close at the High Museum. That moment was inspiring for me.” “I’ve always thought Frida was this icon of fierce resilience,” says Makaela Deer (@makaeladeer). “Her ability to create, have a steady and confident gaze, and celebrate herself and her culture while being challenged by near-death experiences and classic female oppression.”

When Deer painted Kahlo — her first public mural — she dug into Mexican culture for visuals. A photo of a Mexican sunset prompted her to sample colors and represent a day’s end: death. For Kahlo’s pose and wardrobe, she says, “I wanted to make her a little more relatable, so I included the cigarette and those hand earrings that are in vogue today.”

The jaguar mask is based on Mexican masks used for celebrations — jaguars represent strength, fertility, power and royalty — all things Kahlo embodies. The birds-of-paradise  represent freedom. “Frida is transparent in her art, she is a beautiful cultural icon of the Mexican expression rooted in its indigenous culture,” says Miguel Dominguez, who became an artist at age 18. Born in Mexico, Dominguez (@migueldoesart) trained at several studios in his hometown of Zacatecas and attended the Universidad de la Vera-Cruz, graduating in 2015 as a graphic designer.

He says he’s fascinated by Kahlo’s ability to depict her Mexican roots as someone who inspires freedom of the soul and the authentic expression of  being. In addition to his Las Margaritas mural, Dominguez also did one in 2017 as part of Art on the Atlanta BeltLine (on the Westside Trail at Murphy Avenue).