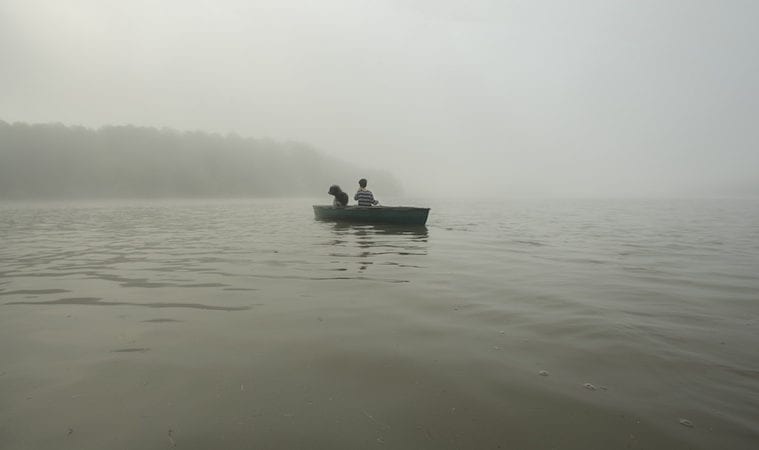 A still from "Over the Bent World," a short film from Micah and Whitney Stansell. (Images courtesy of Flux Projects)

For 10 years, Flux Projects has put public art in communal spaces such as parks, shopping malls and empty lots. When the Covid-19 pandemic hit, it moved to the most communal space of all: the internet.

The arts nonprofit launched its Virtual Art Series on April 2, a six-week online exhibit that will feature projects by six local artists, unveiled one at a time each week through mid-May.

The inaugural piece is Micah and Whitney Stansell’s contemplative and quietly lovely short film Over the Bent World, which follows kids in nature, juxtaposing such images as thick fog and bright bursts of sunlight, fire and water. The narration includes the poetry of Gerard Manley Hopkins.

The virtual exhibition added Stir Crazy, a cello performance by musician OkCello (Okorie Johnson) last week. It features frenzied musical outbursts that mimic the hyper-anxiety of shelter-at-home isolation. As he plays, sitting in an immaculate and empty room, Johnson’s facial expressions remain muted, his eyes closed. The music does all the talking.

With this series, at this time in history, Flux Projects seems to have come full circle. It was founded by Louis Corrigan in response to the 2009 recession, with a mission to help financially struggling artists.

There are some marked differences, of course, between now and then. OkCello’s “Stir Crazy,” an apt title for these shelter-in-place times.

As executive director Anne Dennington pondered how to keep curating art in this climate, she says: “Whatever we did had to feel organic in our work and feel like it came from our DNA.”

The rules of the Virtual Art Series were fairly open. Artists didn’t have to work in their usual medium. They didn’t need to comment on Covid-19 but could. The only requirement was that each piece be between one and five minutes.

Up next week — Wednesday, April 15 — is a new piece from writer Anne Corbitt. Her previous work with Flux Projects includes the 2017 “mystery series” The Disappearance of Eliot Wiley, which invited readers to connect clues from each chapter to help crack the case.

Dennington says the series will then feature work by artists who ordinarily create immersive experiences. Other than that, mum’s the word. Flux isn’t releasing too many details about the rest of the lineup so that each artist can soak up as much focus and attention as possible during their debut week.

All six pieces in the Virtual Art Series will stay on the Flux website indefinitely, eventually moving to its digital archive once the series has wrapped.