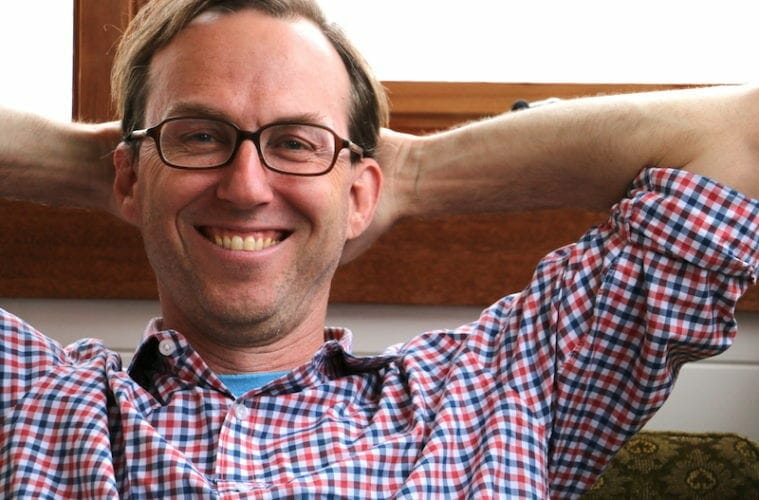 Shortly after the new year, Louis Corrigan chose Facebook to announce the dissolution of Possible Futures, the nonprofit he founded in 2010 to nurture Atlanta’s next wave of risk-takers, dreamers and original thinkers in the arts. “We had done our part,” he said. But the comments that followed from artists, critics and cultural gatekeepers thanking Corrigan for the nearly $1 million that Possible Futures had provided during the decade, made it clear he’d done more than his share to cultivate individuals and organizations.

“Every one of us in the arts space in Atlanta is indebted for your vision and investments and even more for your friendship,” said Doug Shipman, president and CEO of the Woodruff Arts Center. Matt Arnett, cofounder of Tinwood Media & Souls Grown Deep Foundation, said it was hard to image the landscape without Corrigan’s contributions “financial, intellectual and otherwise.” Lauri Stallings, founder of the performance group glo, turned to emojis — ????????????????????– to express gratitude for what she describes as her kinship with the most spiritual man she knows in Atlanta.

“Louis invested in moments, in experimentation, in the live part of art that is not completely predictable,” Stallings says. “He is an exemplary, one-of-a-kind human who knows that socially engaged art, like all movement, is a different intelligence. Still now, I regret the day he pulled his calf muscle skipping with glo. I should have insisted he stretch more.” Lauri Stallings of glo and Louis Corrigan (foreground) dance “Sol Le Witts 54 Columns” in the Old Fourth Ward on October 15, 2017. She calls him an “exemplary” human. (Photo by Thom Baker)

“Louis is the perfect example of an arts patron,” says Barral, whose live score and screening of the silent-film classic Nosferatu has been a Halloween tradition at the Goat Farm Arts Center since Corrigan underwrote it seven years ago. “Like most artists, I’ve had to wear many hats as a producer, director, manager, fixer all my life. But when Louis hired somebody else to handle all the technicalities and logistics of producing a concert, it allowed me to concentrate on just being an artist without distraction, and pushed me to create even more.”

Corrigan’s $5,000 contribution jump-started ArtsATL, where he became the first board president and was consistently “committed, strong but not domineering, affable and unrufflable,” according to fellow board member Vicki Palefsky. In 2011, he financed the trilingual publication Noplaceness: Art in a Post-Urban Landscape (Possible Futures, 272 pages) and sent authors Jerry Cullum, Cinqué Hicks and ArtsATL cofounder Catherine Fox to Brazil to create a dialogue between artists and critics in North and South America.

“The experience was one of the highlights of my career,” says Fox, “not only because of the high level of discussions I had, but because as a journalist accustomed to writing short-form pieces on deadline, it allowed me to go deep and write extensively about the artists in Atlanta in a way I never had before.”

Corrigan’s boosterism for the city comes naturally — he’s a native Atlantan whose family ties here date to 1853. Public displays of exuberance (like skipping with glo), however, are out of character for someone who describes himself as shy and private. Fox characterizes him as “an unassuming, modest, whip-smart meta-thinker.”

Though his mother was an amateur painter, Corrigan’s exposure to the arts as a child was limited. San Francisco, where he worked for a year as a stock research analyst, and its dynamic art scene, ignited his imagination. The experience was so transformative that upon his return to Atlanta in 2008, he resolved to find a local equivalent of what he loved best about the Fog City. Within months, he found his tribe and was quickly embraced by a small but generous art scene. Louis Corrigan’s Possible Futures nonprofit financed this 2011 book that looks at Atlanta and its artists, including Sheila Pree Bright, Ruth Laxson and Fahamu Pecou, among others. (Image by artist Danielle Roney)

An unabashed champion of beauty, Corrigan embraced work that inspired wonder and awe without irony or cynicism. But he was also a fan of cutting-edge, avant-garde work. His engagement granted him a level of connection with people that might have eluded him otherwise and sensitized him to the fact that, above and beyond cash, he could provide the kind of capital that cannot be itemized on a spreadsheet.

“I was a very well-loved child,” says Corrigan. “But over time I came to understand that artists haven’t always enjoyed that kind of support, either in their personal lives or in their professional lives. I think I could feel what their need felt like . . . and thought I could answer it.”

The more he saw, the more he wanted to amplify the voices of artists. Longevity never factored into his thinking about grassroots organizations. “I’ve been president and treasurer of various nonprofit arts boards and know it’s very difficult to sustain funding,” Corrigan says. “But I actually think there are things worth doing even if they don’t last more than a couple years.”

Contributions typically came in $10K to $30K increments — a small sum for such juggernauts as the Woodruff Arts Center but a game-changer for such artists as Monica Campana, co-founder of Living Walls, The City Speaks, a nonprofit that uses the power of public art as an engine for social and economic change.

Corrrigan reached out to Campana in 2010 after she’d assembled a group of muralists to paint a series of public art installations on a small $4,000 budget. Convinced that Atlanta was ready for the scrappy, DIY, fearless sensibility that fueled Campana’s inaugural effort, he encouraged her to keep going because he believed it could change the city.

“When he pulled out his checkbook and wrote a check for $10,000, that was the most money I’d ever seen in my life,” says Campana, who worked at a coffee shop and and didn’t have a bank account. Today she tries to pay each artist five figures for their work. What stands out in her memory, though, apart from the unsolicited cash infusion, was the paternal pride Corrigan demonstrated to her as an artist on the brink of giving up.

“Louis was really cute,” Campana says. “It was like seeing a dad who was really proud of his kid . . . a messy, kind of crazy kid. He wanted to see my vision as a curator and never tried to censor me. He doesn’t just support the project, but the energy and passion that fuel the project.”

“It was easy to want to step up”

“My desire to give evolved from going to a lot of museums, art galleries and live performances,” he says. “It took years to develop my taste, but once I was on the ground, seeing what these entities could do, it was easy to want to step up and help. I actually wonder why more people don’t do it because I can’t imagine anything more satisfying.” Georgia provides some of the lowest arts funding per capita of any state in the nation. Unlike New York, Chicago and Los Angeles, public funding for the arts in Atlanta is inadequate. Camille Russell-Love, executive director of Atlanta’s Office of Cultural Affairs, acknowledges that the cultural community cannot depend on government support alone and, given the reality, it’s impossible to overestimate the value of private philanthropy.

“If you look at Maslow’s hierarchy of needs, Atlanta is still low on the pyramid,” she says. “The city hasn’t got to where we really understand the value of supporting people’s souls versus their basic needs. With that in mind, when someone like Louis comes on the scene — the best example of someone who quietly took an initiative to help artists find their footing and ride out tough periods of time — that is highly significant. If there were 20 other Louis Corrigans in the city, Atlanta would be better for it.”