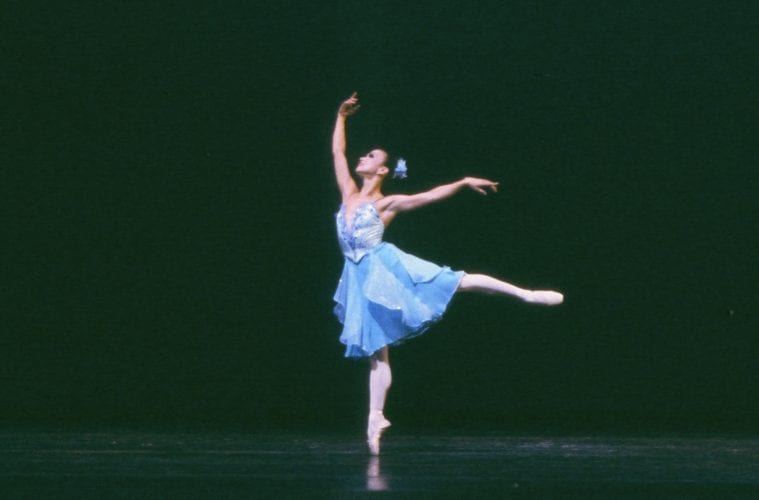 Give me a child until he is seven and I will show you the man. – Aristotle

Maniya Barredo, née Josephine Carmen Imutan Barredo, was seven years old when a photographer snapped the sepia-toned picture of her that hangs in the lobby of Alpharetta’s Metropolitan Ballet Theatre — the conservatory she founded 20 years ago. Back in 1958, the pixie en pointe (who remembers wearing her toe shoes home and sleeping in them that night) was already dancing professionally in the Philippines. She was the impossibly precocious child selected to offer bouquets of flowers to visiting ballerinas from abroad during curtain calls. She was a media darling, known as Honey, who starred in her own children’s television show by the age of nine. And she was the old soul who took her mother’s wisdom to heart when her mother said, “Honey, God gave you a gift. Your job is to take care of it and share it and make people happy.”

Sixty years later, the essence of that charismatic seven-year-old who wanted to elevate others through dance is not only alive and well within Barredo, but it also remains her most outstanding characteristic.

She is diminutive, demonstrative and uninhibited. She prefers hugs to handshakes, even if greeting strangers. When she giggles, her whole body quakes, and when she cries, her eyes appear childlike. Barredo’s happy place is exploring the Georgia mountains astride her horse, Elwood, and alongside her husband, Patterson Thompson. She is forward-thinking by nature. But as she anticipates receiving the 2019 Pioneer of Atlanta Dance Award at the Modern Atlanta Dance Festival on May 11, Barredo can’t help looking back on a career that has been nothing short of enchanted. Maniya Barredo at age seven in Manila, Philippines (Inscribed to her husband: “My darling Patterson, love always your very own Tiny Dancer”)

One of nine children growing up in the Philippines, Barredo didn’t have much in terms of material wealth, and as a result, she learned responsibility at an early age. She recalls her mother writing IOU notes when school tuitions were due and money was short. And because everyone in the family saw themselves as part of the solution, Barredo contributed her television earnings to cover household bills and added expenses at Christmastime.

Contrary to the financial restraints, there was an abundance of creativity and artistic talent in her family. Her brother, Gabriel, is now a sculptor whose room-sized installations have earned international renown. Her aunt, Carmen Barredo, is cofounder of the venerable Repertory Philippines theatre company. And her cousin, Lea Salonga (who took her first ballet lessons with Barredo), is the Tony Award-winning singer/actress who originated the role of Kim in Miss Saigon on Broadway.

Barredo migrated to New York in 1970 with a scholarship to study at the Joffrey School. She was christened “Maniya” by Robert Joffrey himself, who used to rename dancers in whom he saw exceptional potential. Lee Harper, the Atlanta-based dancer, choreographer and educator who knew Barredo back then, and still refers to her as “Honey,” remembers the incandescence that made her a standout.

“Honey was a beautiful, dynamic dancer,” says Harper. “She was a little jewel who commanded attention with her charisma, her eyes and her face. You had to be strong to do the roles she was doing, but you never saw the effort . . . you only saw the princess in performance.”

Despite outward appearances, Barredo’s pursuit of excellence came at a steep price.

Having to adapt to a new culture absent the love and support of her close-knit family was painful. She refused to jump on the 1970s-era recreational-drug-use bandwagon. Her colleagues had no such reservations, and this exacerbated the feeling of being a fish out of water. When her monthly stipends from a John D. Rockefeller scholarship fund ran low — in part because Barredo used to send a portion of her income home to help out with family expenses — she resorted to eating a mostly starchy diet that caused her to gain 20 pounds in six months.

The change didn’t go unnoticed by an instructor, William Griffith, whose harsh criticism sent Barredo fleeing class in tears one afternoon. She was inconsolable by the time he caught up with her.

“I was trying my best and working so hard,” says Barredo. “I asked Mr. Griffith why he was trying to hurt me and told him I would not stand for it. I said I wanted to go home and feel loved again. Next thing I knew, he picked me up, and he was crying too. He asked, ‘Don’t you know what you have, Maniya?’”

The breaking point turned out to be a catharsis that revitalized Barredo’s commitment to dance and cemented a mentorship that lasted until Griffith’s death 10 years later.

Still, when an opportunity to dance with Les Grands Ballets Canadiens came about in 1973, Barredo leapt at the chance. Four years later, Bobby Barnett — then artistic director of Atlanta Ballet who’d recruited Barredo’s first husband, Mannie Rowe as a soloist — flew to Québec, watched Barredo dance in Swan Lake and hired her as a principal. It was the start of a nearly 20-year working relationship during which Barredo charmed audiences as Juliet, Odette/Odile and the Sugar Plum Fairy. For all her virtuosity, musicality and fey-like artistry on stage and off, Barredo’s tenacity and ferocity in rehearsals are what stand out in Barnett’s mind 40 years later.

“Maniya wore her partners out,” Barnett says. “She tore up the stage as Juliet with Nicolas Pacaña in Romeo and Juliet. She is a fighter, a worker, incredibly dedicated and excels at everything she does. It’s the whole package with Maniya. She’s like a daughter to me, and I’m very proud of that fact.”

The feeling is mutual for Barredo, whose tears of gratitude flow when remembering how generous Barrett was during her tenure at Atlanta Ballet. “Bobby allowed me to be Honey, and let me guest anywhere and everywhere an opportunity was presented,” says Barredo.

Thanks to Barnett’s willingness to share his protégé, Barredo enjoyed periodic private coaching sessions in New York with Melissa Hayden, one of George Balanchine’s best dancers. Barredo made guest appearances on stages of the Bolshoi Ballet and the Paris Opera and danced the lead in Giselle at the Cultural Center of the Philippines in 1978.

“As I exited my dressing room, Dame Margot Fonteyn [who, unbeknownst to Barredo, had been in attendance] approached me and said, ‘This is your night,’” says Barredo. “In front of the president and the media, she said, ‘This is your Prima Ballerina of the Philippines.’ I started to cry as I curtsied for her, and remember her lifting my chin as she looked into my eyes, saying, ‘It’s your turn.’ How does this even happen to a little girl from a Third World country?!”

Barredo danced her farewell performance in the Philippines in 1994, also as Giselle. Clearly, she enchanted audiences as much as she had all those years ago, because President Fidel Ramos awarded her the Presidential Medal of Merit.

Apparently, the spell was cast when Barredo took her first ballet class as a three-year-old.

“I told my mom, ‘I’ve never been this happy,’” she says. “In my child’s mind, the ballet studio was like the most wonderful playground. It just hugged me every time I walked in, and it still feels that way today.”

The same spirit infuses every aspect of Metropolitan Ballet Theatre, according to Luis Eduardo Gonzalez. He began his studies with Barredo as an eight-year-old in 2002 and says their immediate connection changed the trajectory of his life. Maniya Barredo teaches class at her studio in Alpharetta. (Photo by Emily Canter-Amthor)

“Artistic expression in little boys is not always encouraged in Latin culture,” says Gonzalez, who has danced with Houston Ballet II, Orlando Ballet and Joffrey Ballet since leaving Metropolitan in 2009. “But Maniya uses dance as a medium to teach children that it’s okay to be themselves. She gave me a voice, through dance, to say things I could not say otherwise. If it wasn’t for her, I would be doing something completely different.”

Most conservatory students are home-schooled to accommodate rigorous ballet training schedules that can exceed 30 to 40 hours per week. Barredo understands the psychological and spiritual stamina required of anyone seeking a career as a professional dancer, and her combination of tough love and high expectations at the barre is tailored accordingly. But she is equally keen on cultivating individuals who are the best versions of themselves.

“As a teacher, I have borrowed from every teacher I’ve ever had,” says Barredo. “The best ones taught me the importance of mentoring the whole person, tailoring instructions according to each dancer’s anatomy and personality, being clear when I make corrections and instilling fearlessness in my pupils.”

Self-reliance and discipline are basic requirements at Metropolitan, where children are expected to carry their own bags as opposed to treating their parents like sherpas. Students are responsible for being punctual, advocating for themselves and resolving conflicts without adult intervention.

The running joke among parents is that Metropolitan is “the best military convent school on the planet.” To date, 30 former pupils have been invited to join professional dance companies over a 20-year span. Others have excelled in medicine, law, academics and business. Observers like Emily Canter-Amthor, Metropolitan’s production manager and parent of a daughter, Stevie, who has been enrolled at the conservatory for seven years, see Barredo as a peerless role model.

“Even though Maniya is a progressive thinker, she is hugely traditional,” says Canter-Amthor. “I’ve got to say that if my kid had just been raised by her father and me, I don’t know that she would have done as well without the influence of Maniya’s stand-on-your-own-two-feet mentality. Her attitude informs the way Stevie approaches scholastics — where there is no drama regardless of the difficulty of an assignment, or the quantity of homework — [and] has taught me that if you give children responsibilities, they will rise to the challenge.” Barredo sees herself as a kaleidoscope of all the people who have loved, nurtured and guided her. She says she sees children as “masterpieces-in-the making” and wants to help maximize their potential. Former pupils routinely call or write seeking her counsel on everything from applying to medical school to climbing the corporate ladder to negotiating love and marriage, and she takes pride in being their North Star. The point of her life’s work is not merely to turn out artists who can captivate audiences but to cultivate sterling human beings who might change the world.

“I tell them, ‘I don’t care if you dance or not,’” says Barredo. “‘But you will be wonderful citizens. You will serve.’”