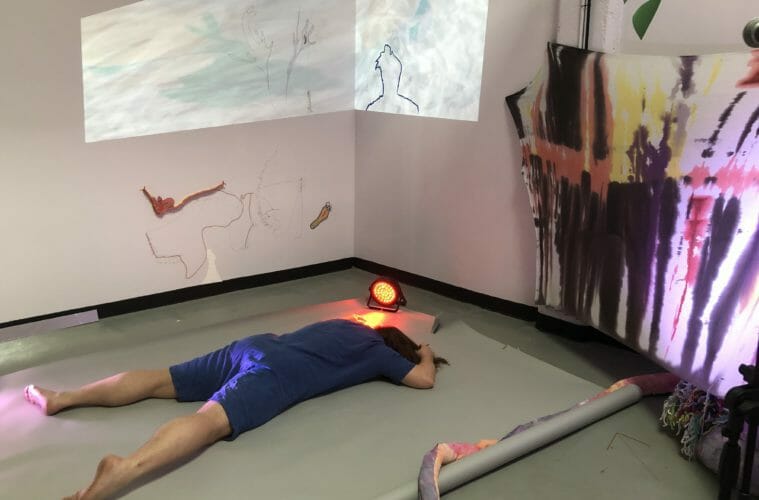 Sean Nguyen-Hilton was alone in the "Cats in a Library" space on September 18. (Photos by Gillian Anne Renault)

Three dancers and a dog shun virtuosity, embrace process in “Cats in a Library”

When does dance become performance art? When does performance art become visual art? And when do those categories cease to have any useful meaning? When you’re watching Fly on a Wall at the MINT gallery. Led by the company’s co-founder Sean Nguyen-Hilton, the event “Cats in a Library” unfurls day by day, from September 17 through October 2, in the small black box space in the middle of the gallery.

On the exterior wall of the space is artwork created by the three “Cats” performers, Nguyen-Hilton, Jimmy Joyner and Nicole Johnson, and a printed list of actions that a viewer can make, such as plugging a thumb drive into the nearby laptop to watch videos from the previous days, or taking photos of the event and posting them on Fly’s website. Viewers are invited to walk into the space (it’s open on two sides) while the artists are present.

Writing on the wall explains the title. It’s a William James quote: “We may be in the Universe as dogs and cats are in our libraries, seeing the books and hearing the conversation, but having no inkling of the meaning of it all.” This is an apt description of the 16-day event. It’s as if Nguyen-Hilton wants to deconstruct his dancer-self — the technique, the structure, the look — and immerse himself into something that just happens, as life happens, expressed through improvisational, non-virtuosic creativity. 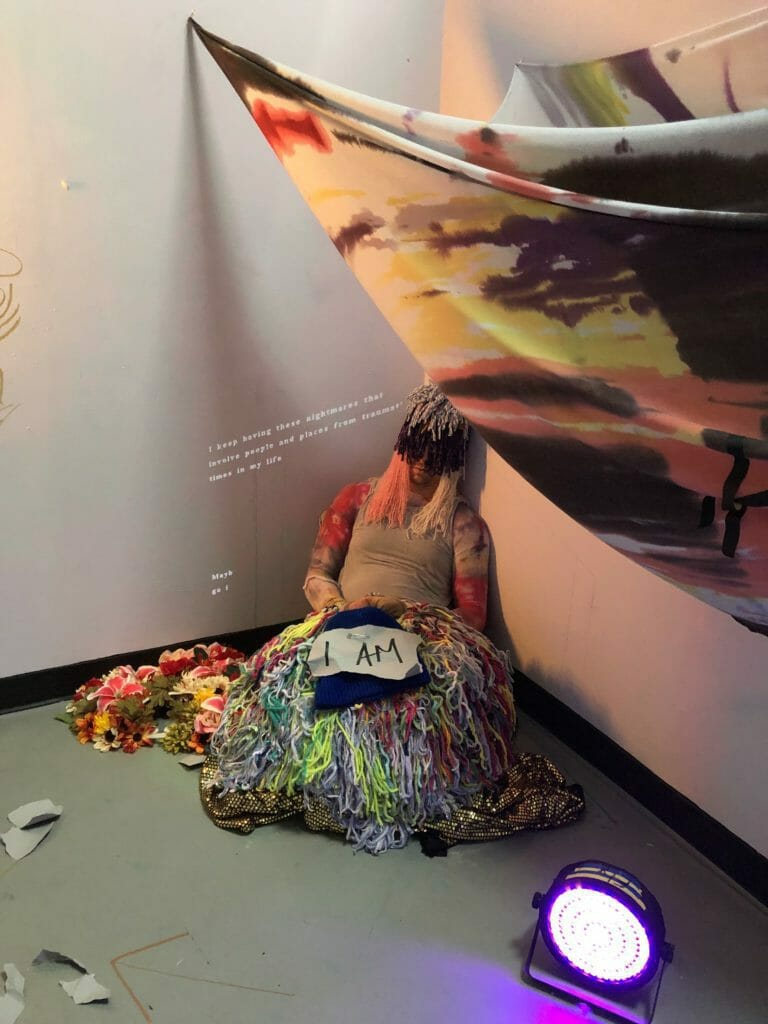 Jimmy Joyner rests in one corner.

An initial visit on September 18 found Nguyen-Hilton alone, curled inside a soft, hollow fabric thing that could be a cocoon or a coiled-up snake. It moved as he moved. Just his feet were visible, sometimes his long hair. A tie-dyed cloth was stretched across one corner, an “off stage” of sorts. One wall of the space is full of creativity tools such as balls of wool, colored string, paper, paintbrushes, a soundboard. In the gallery alongside Fly’s space, five visual artists were talking about their work to a group of visitors. There was a sense of life happening around him.

When he lay face down on the floor, barely moving, illumined on one side by a red light, it felt like time to explore the rest of the gallery. In a hallway at the back is more visual art created by the three “Cats” performers. Most of them look less professional than the other artwork in the gallery. Maybe that’s the point.

Maybe “Fly on a Wall” is saying you too can break down the wall between expert and non-expert. Between what belongs in a gallery and what doesn’t. Between movement that is dance and movement that isn’t. And what is “professional” anyway?

Nguyen-Hilton has danced with several ballet companies and locally with staibdance. Recently, he has expressed a strong desire to move beyond the virtuoso, performative structure of those companies. You could bemoan the fact that we may not see his virtuosity again. You could also applaud him for taking risks, for not caring if anyone likes his work and for being more interested in process than performance. It depends on your point of view, your expectations. And that too, I suspect, is the point.

What does the viewer bring to an event like this, as opposed to sitting passively in a darkened theater? That’s something we haven’t been able to do since March 2020, so perhaps the premise of “Cats in a Library” is: Why wait for that? Why not experience the flow of life as it happens? Why plan, when a global pandemic makes planning impossible?

A second visit on September 25 found all three “Cats” artists and a dog — yes, a real dog — in the space and there was lots of activity. Joyner tore a large piece of paper into smaller pieces and later sat in the corner doing embroidery. Was this “fun crafts for adults”? Johnson painted for a bit, then moved lyrically and improvisationally, sometimes with a long stretchy piece of fabric. 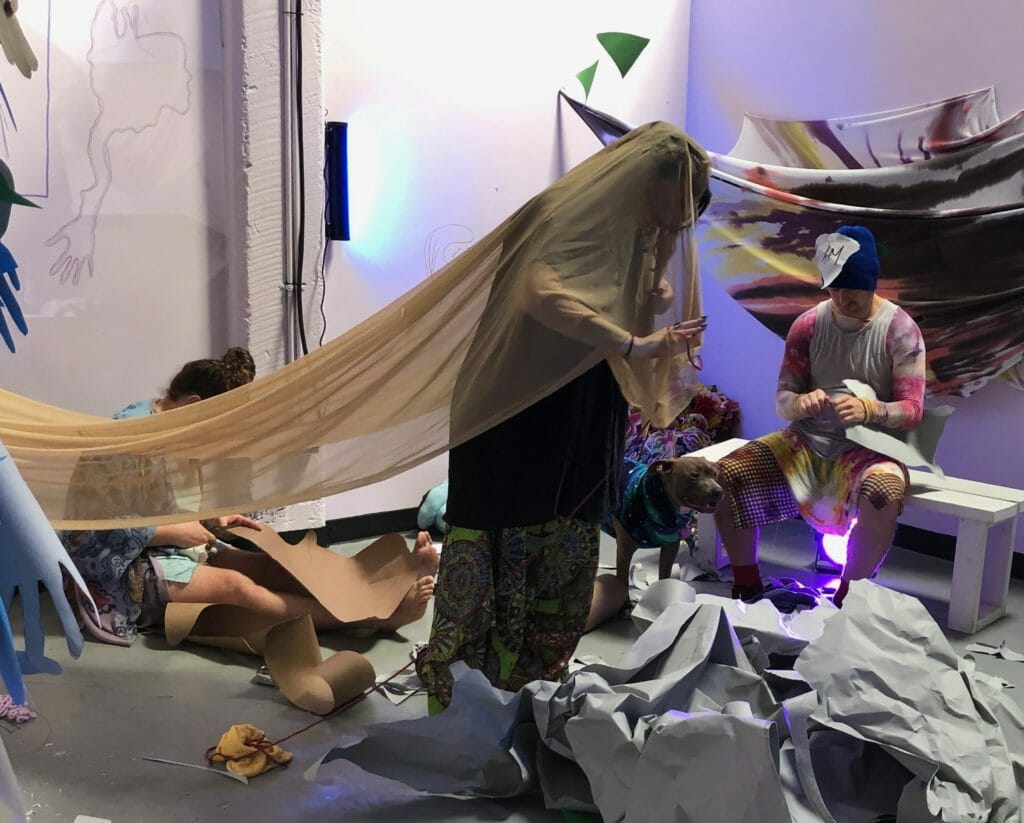 (Left to right): Nguyen-Hilton, Johnson, the dog and Joyner in process during the second visit to the gallery

Nguyen-Hilton joined her with a piece of black fabric, when he wasn’t tweaking the music or speaking into the mic describing his process: “to come to the body without intention or desire,” “the body as a site of potential,” “perhaps this practice is an act of resistance.” That spoke loudest to this viewer, especially since he then cranked up the volume and ballet music poured out (“Nutcracker” pas de deux perhaps?) while he stood in one corner furiously shaking a maraca. Resistance yes, but it was also very funny.

More of their art was hanging in the back hallway than the previous week, including the big fabric cocoon. One of Nguyen-Hilton’s pieces now has a label and a sales price: $150. Is he serious, is it play or is it satire? It’s hard to tell.

It’s unlikely that visitors will spend more than an hour at a time at MINT. One wonders if the “Cats” artists create all the time they’re there (two to four hours each day) or are most active when someone is watching. It’s like the proverbial tree in the forest — if there’s no one there to hear it fall, does it make a sound? If there’s no one there to watch . . . ?

“Cats in a Library” invites viewers to experience the unstructured process with them. Like it or not. Because, like it or not, life happens — in unstructured, unexpected, non-virtuosic ways, especially during a pandemic and times of social unrest. “Cats” makes you think about that, long after leaving the gallery.