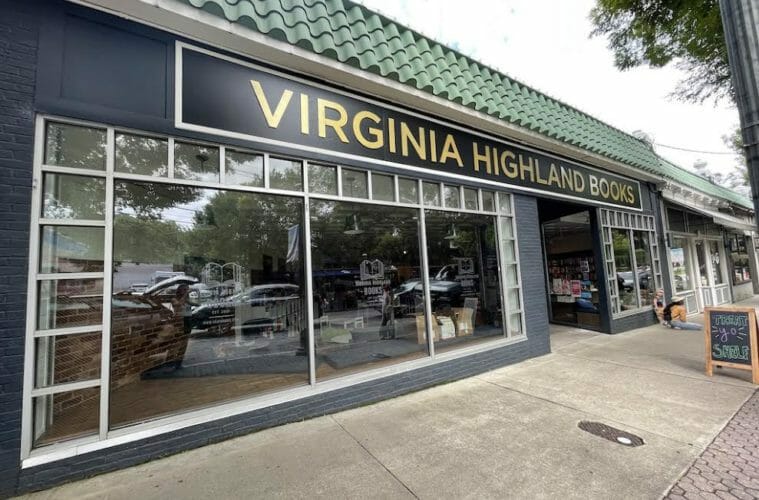 Even in its infancy, Virginia Highland Books is already building community

“As a family, we have always, when we travel, gone to indie bookstores,” says Sandra Huff. “Everywhere we go.”

In fact, the dream for Huff’s recently opened Virginia-Highland bookshop was first seeded around dinner tables on those family vacations. She and her family would post up after a day of exploring and daydream over dinner about what their imaginary little shop might be called, where it might be located. “But we never had any plans to actually make that a reality,” she says, “not until I saw the sign.”

Huff’s dream took root on a chilly day in January when she was wandering around the Virginia-Highland neighborhood looking for a calendar. She noticed a “For Lease’” sign in the window of an empty storefront, a space previously occupied by the Empire South boutique. “When I went by, I just thought, ‘Oh, that would be the perfect place for a bookstore.’” 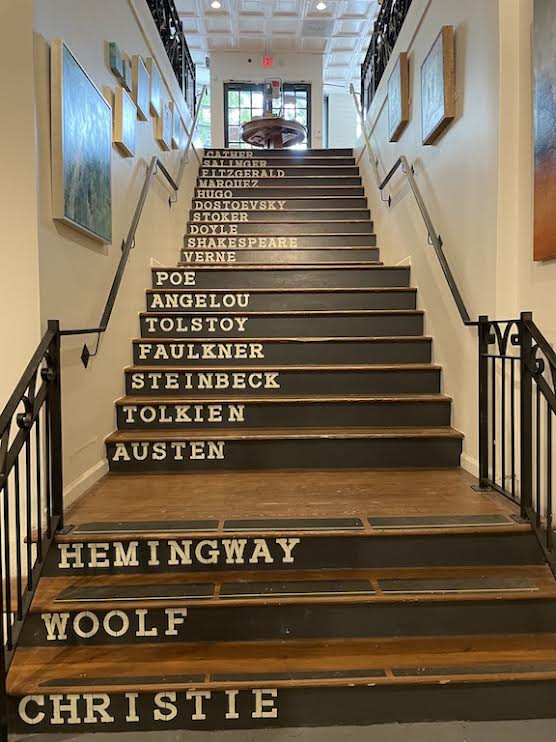 The shop’s stairway of fame is a reminder of the classics.

Six months later, Virginia Highland Books was in full bloom, opening its doors to its first customers on June 21.

Huff, who has a background in marketing and event planning, has spent the past few months learning the ins and outs of running an independent bookstore, a herculean task made easier, she says, by a supportive independent booksellers community.

“I was surprised at how cooperative the whole industry is,” says Huff. “It was January 12 when I saw the sign. That’s pretty fast to open a bookstore, and I don’t think I could’ve done it for a different industry. I would call one person and they would say, ‘Oh, here’s four people to call to get your bookshelves.’ The American Booksellers Association and the Southern Association [Southern Indie Booksellers Alliance], they bend over backwards to try and support indie bookstores, so it’s just been great, that piece of it.”

Huff has carefully tended to the growth of the shop, already cultivating a community of repeat customers at the corner of Virginia and North Highland avenues. The front doors to the shop are festooned with posters announcing a fun mix of community events. Shoppers stroll in from the street outside and whisper to one another, “It feels like this place has been here forever.”

The store hosted its first local author, H.K. Jacobs, for a book signing event in August, and Huff says more in-person events, including story times for children, are slated for the coming months. She also intends to use the shop as a vehicle to give back to the local community, supporting local artists and neighborhood organizations.

“We have our community service project, where every month we’re supporting a different organization,” she says. “For August, we’ve worked with Hillside Atlanta. We have been collecting books and backpacks, and we’ve already dropped off maybe three or four boxes of books for them. We also have local artists who have their works in the store. We [currently] have a photographer and two painters, so people can support their work as well.”

Quirky, and eclectic and all Atlanta

From the outside, the shop calls to mind the charming storefronts of an English high street, but inside, it’s all Atlanta, shelves leaning against exposed brick walls, bursting with a mix of fiction and true crime, history and romance from an array of diverse authors.

“We have a little of everything,” says Huff. “We’re quirky, and we love it. That’s how I read, too. There’s not just one genre.” 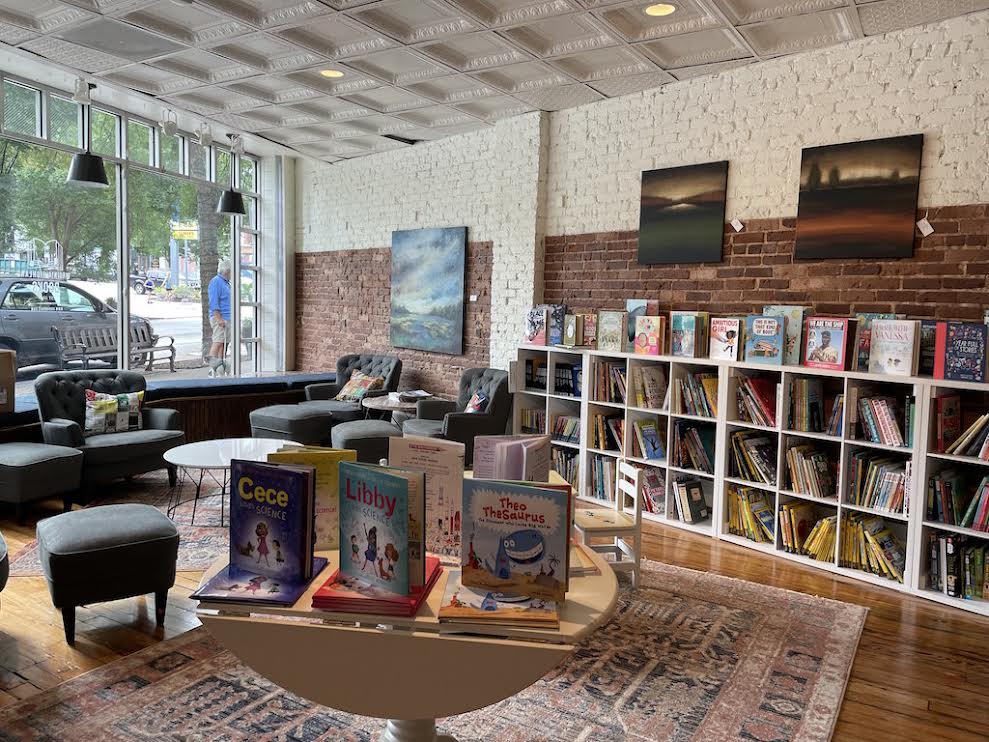 Huff wanted the design of the shop to evoke a comfy living room.

Indeed, her quirky and eclectic decorative touches can also be felt all throughout the two-story shop. Pulling inspiration from some of her favorite bookshops, including E. Shaver in Savannah and Square Books in Oxford, Mississippi, Huff has created a bookstore that feels not unlike a comfy living room.

Rugs are strewn tastefully across wooden-planked floors. A sitting area in the children’s section is padded with plush, oversized chairs, inviting parents to cozy up while their kids flip pages. Cushioned window seats and wooden benches encourage lounging. Downstairs, mismatched lamps sit perched on top of packed shelves of classics and nonfiction, lending the space a kind of warm, library-like glow.

Virginia Highland Books is still very much in its infancy, but thanks to Huff’s intentional curation of both décor and titles, it already has the feeling of a true community bookstore — one where people can lounge and linger, where visitors feel compelled to pluck a book off the shelves and stay awhile.

Beth Ward is a veteran writer and editor. Her work has appeared in numerous publications, including The Rumpus, Hyperallergic, Atlas Obscura, BUST magazine, The Bitter Southerner, Atlanta magazine and Burnaway. She serves on the board of the Georgia Writers Association, and as managing editor for DWF Mag, the editorial arm of Atlanta’s Dream Warriors Foundation.