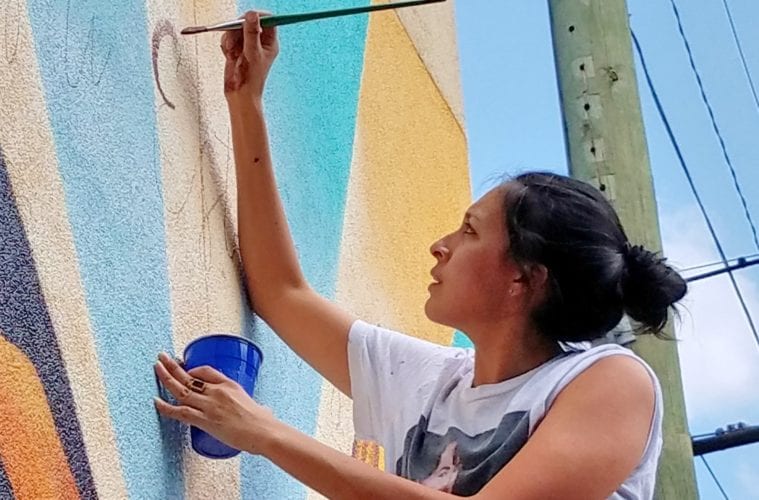 This week in street art: The murals of immigrant activist Yehimi Cambrón

Today we meet Yehimi Cambrón, who uses her murals to tell the stories of immigrants. She moved from Mexico with her family shortly before her eighth birthday and has been here ever since. Her first memories include seeing the butcher shops and bakeries along Buford Highway, an area she still calls home. She graduated from Cross Keys High School in DeKalb County, where she now teaches art. She has a B.A. in studio art from Agnes Scott College. 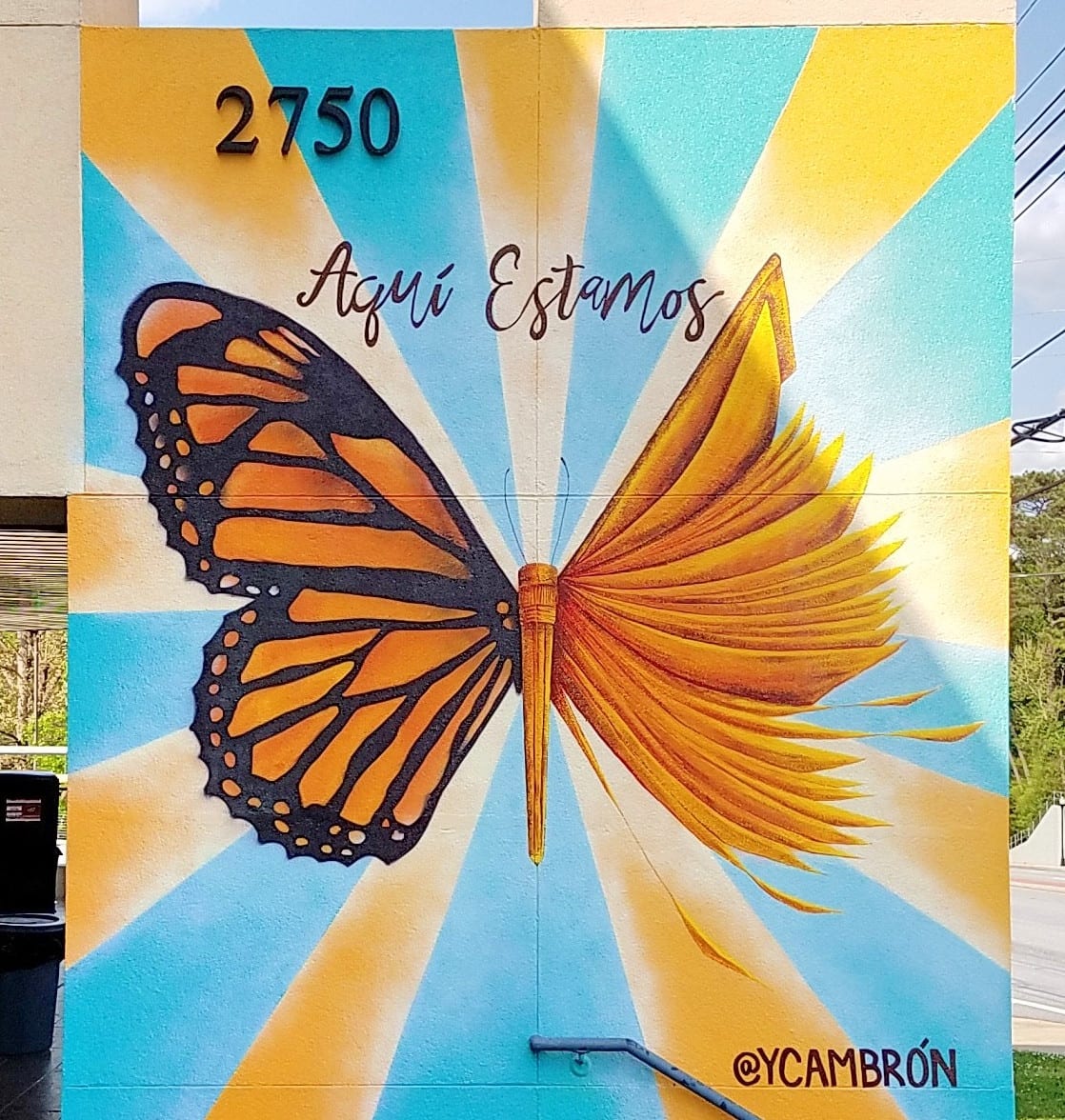 Education Is Liberation, a mural on Buford Highway, uses a pencil as the body of the monarch butterfly, with one wing made of the pages of a book. Monarchs are a frequent theme in Yehimi Cambrón’s work. (Image courtesy of streetartmap.org)

Cambrón, 26, is an undocumented immigrant who’s lived here under the Obama administration’s Deferred Action on Childhood Arrivals program. President Trump officially ended DACA in September 2017. “Deportation is always a possibility,” she says, “especially being as outspoken and visible as I am. We have seen ICE target activists, but I will not allow that fear to immobilize or silence me.”

Cambrón considers her public art a form of resistance and activism. “I want to use my murals as a way to represent immigrants in a positive way, in a more realistic way,” she says with urgency and passion in her voice. “My murals are a way to tell my story in a way that is uncensored. As a country, we have this narrative about immigrants that is highly politicized and criminalizing. I want to use my work to take back our narrative and for us to be the ones who tell the story.” 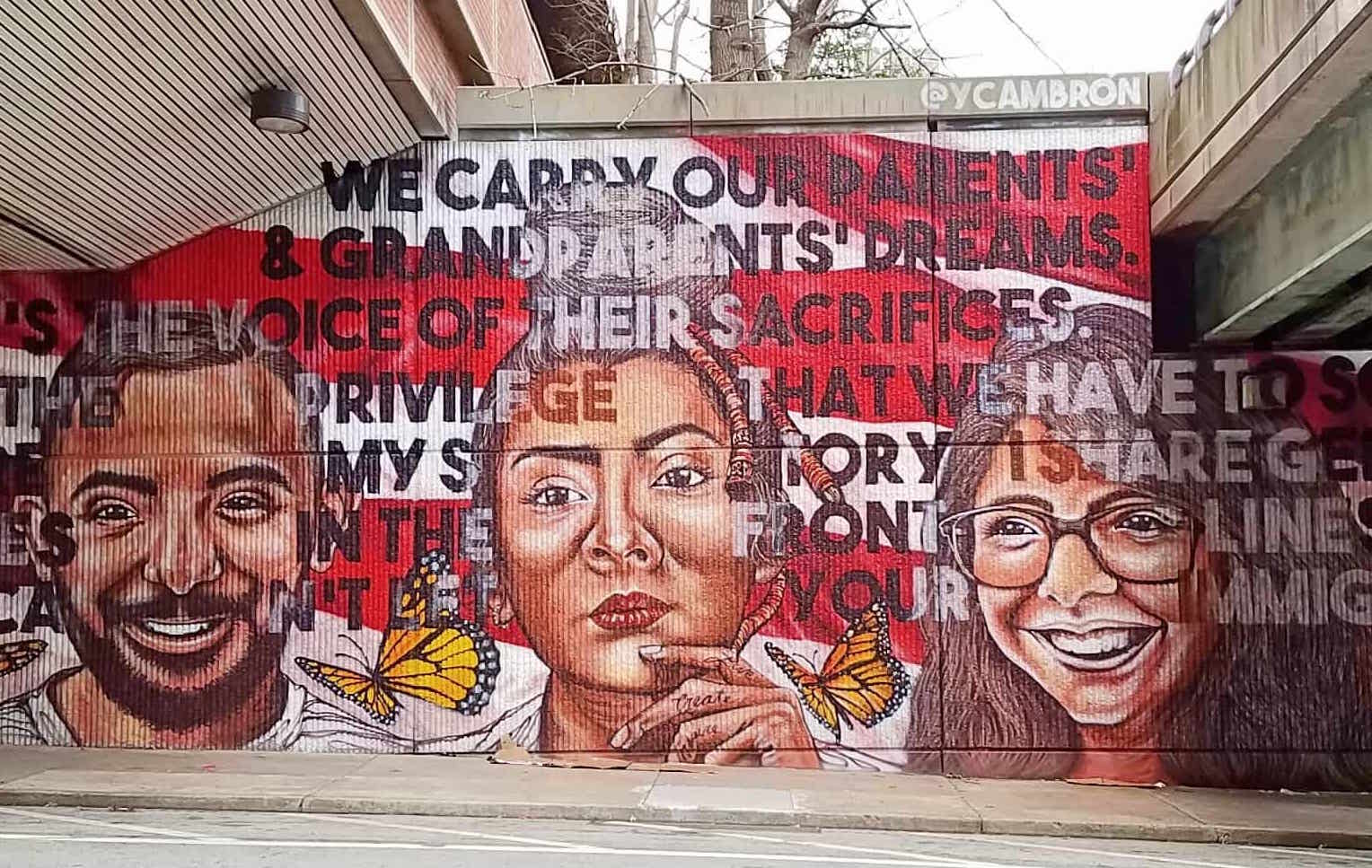 Monuments: We Carry the Dreams (above) was painted at the Georgia State MARTA station as part of a WonderRoot and Atlanta Super Bowl Host Committee mural project. Freedom Fighters (below) is on the back side of downtown Atlanta’s American Hotel. (Images courtesy of streetartmap.org)

Her Education Is Liberation monarch mural is on the Latin American Association building at 2750 Buford Highway NE. It’s a recreation of a mural she did down the road in 2017, at Havana Sandwich Shop. That mural became contentious and was eventually painted over. Her Monuments: We Carry the Dreams, painted as part of WonderRoot and the Atlanta Super Bowl Host Committee’s neighborhood-spanning mural project, is at the Georgia State MARTA station. Freedom Fighters is painted on the back side of the American Hotel facing Centennial Olympic Park in downtown Atlanta.

One of her first murals, painted in November 2017, is across from Refuge Coffee in Clarkston. She plans to update it this summer. Working title: Change for Good. Also this summer, she’ll be doing a mural at Plaza Fiesta, at Buford Highway and Clairmont Road, and in St. James, Minnesota. This month she’s doing a mural in Decatur in honor of immigrant mothers through the Atlanta nonprofit Living Walls. Look for it by May 31. “I want to put murals all over the country,” she says.

Cambrón takes her art inside in June. She’s one of six artists in Origins and Belonging, Drawn From Atlanta at the High Museum of Art, the third in a series of exhibitions there focused on work by Atlanta artists. She’ll exhibit a seven-portrait series that examines the complexities of mixed-status families (undocumented immigrants, DACA recipients, U.S. citizens), the agency of sharing one’s story and the resilience of the immigrant community despite the limitations of their status.

ARTS ATL’s street art column is a collaboration with Art Rudick and his Atlanta Street Art Map. We want to hear from you, too. Please send comments, suggestions and ideas to kathy@artsatl.org.