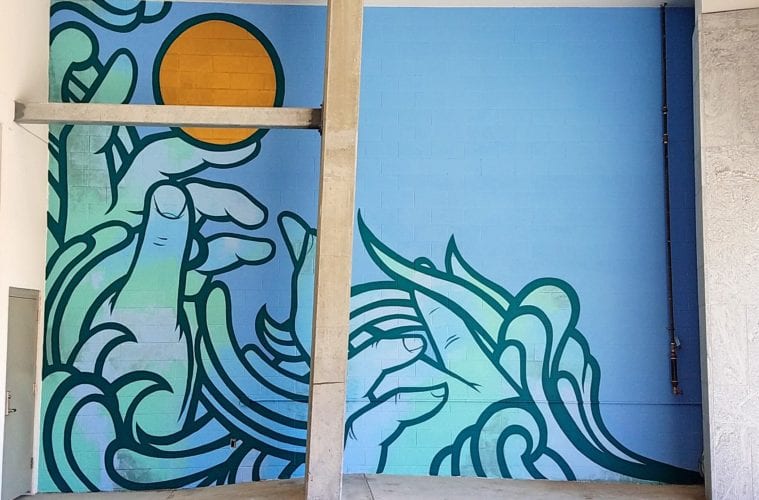 Detail of the Peter Ferrari mural inside the parking deck at the Modera Buckhead apartment complex (Courtesy of streetartmap.org)

This week in street art: The hidden canvases of metro parking decks

When was the last time you left a parking deck with a good impression? We thought not, but street art is making inroads, turning walls at these dark, drab, utilitarian structures into something fascinating and memorable. This week we look at five Atlanta-based artists and their nearly hidden murals at decks in Downtown Atlanta, Buckhead, Decatur, Sandy Springs and Vinings.

Sanithna Phansavanh, aka Sanithna, did his mural in 2015 for the city of Atlanta’s Elevate public art project. Participants were asked to explore the theme of “Forever, I Love Atlanta.” In a website statement, he says it “extends the narrative of an existing sculptural monument, Atlanta From the Ashes, to showcase the continued growth and thriving of Atlanta.” Look for the mural outside the deck at 104 Luckie St. NW. See more of Sanithna’s work, which largely examines the human condition, on Instagram. Sanithna’s mural is outside the parking deck at 104 Luckie St. NW. (All images courtesy of streetartmap.org)

Look inside the deck at the Modera Buckhead apartments and you’ll see blue-green flowers and fingers stretched upward. They’re the work of Peter Ferrari, a freelance painter and muralist (also cofounder and curator at Facet Gallery on the Atlanta BeltLine’s Eastside Trail). See more of his work on Instagram, and read more about him on streetartmap.org. Look for his Modera mural at 3005 Peachtree Road NE. Molly Rose Freeman brings color and organic patterns to public works of art that “live and breathe,” she says. Freeman also paints and does installations, illustrations and sculpture. She was one of four artists behind the Persephone Rising mural at The Edge apartments, the subject of ARTS ATL’s April 11 street art column. Look for her parking deck mural, titled Decatur Blues, outside the West Court Square deck at 158 W. Ponce De Leon Ave. in downtown Decatur, and see more of her work on Instagram.

Mr. Totem, who goes by that name only, does graffiti and murals and owns a graphic arts company. The home page of his website says, cryptically, “I know why you are here.” He’s long been fascinated by engineering the interactions of letters, which you’ll see on floors P1, P2 and P3 at The Prado shopping mall, 5600 Roswell Road, Sandy Springs. See more of his work on Instagram. Mr. Totem’s mural, which includes the manipulated letters for which he’s known, is on Level 3 in The Prado shopping center deck on Roswell Road in Sandy Springs.

Krista M. Jones, aka Jonesy, is a world traveler who settled in Atlanta about 10 years ago. She’s a mixed-media artist who uses animal imagery, patterns, self-portraiture and figurative elements to observe the human experience. When she creates public art, she typically works in a graphic, illustrative way, she says in website statement. She uses bold colors and patterns and wants the work to be a healing experience for viewers. Look for her Cranes mural inside the deck at the Modera Vinings apartments, 3205 Cumberland Blvd. SE. See more of her work on Instagram. Jonesy’s Cranes mural is inside the deck at the Modera Vinings apartments on Cumberland Blvd. SE. in Vinings.

ARTS ATL’s street art column is done in collaboration with Art Rudick and his Atlanta Street Art Map. We want to hear from you, too. See something we should know about? Please email kathy@artsatl.org.