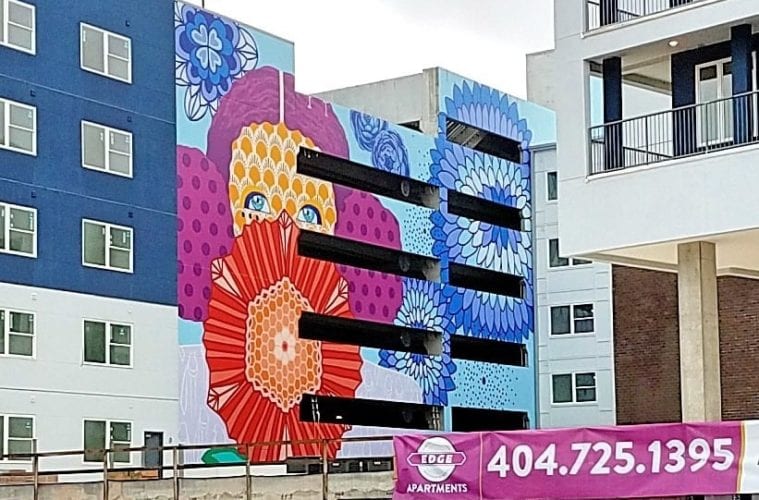 This week in street art: Apartment murals and the Girl Power of “Persephone Rising”

Muralist and new mom Lauren Pallotta Stumberg walked past The Edge construction site every day when she and her son strolled through their Old Fourth Ward neighborhood. She eventually gathered the courage to cold call the apartment complex’s property manager and propose a mural for the nine-story wall facing Edgewood Avenue.

Her call was returned with an enthusiastic “Yes!”

In the male-centric world of murals, this was a Girl Power project. The Edge team was predominantly female, from the muralists to their assistants and the lead construction worker. “The feeling of empowerment having an all-female leadership team was timely and something of which to be proud,” says Melania Armenta, marketing manager for the building, owned by North America Properties.

There’s a stigma behind commercial development in artistic neighborhoods like the Old Fourth Ward too, Armenta says. “We wanted to show that we care about the existing culture of the neighborhood and want to celebrate it.”

Stumberg was the curator and lead artist. She recruited muralists Lela Brunet, Molly Rose Freeman and Laura Vela because they “value collaboration over competition and mix pattern with both realism and abstract concepts.” This is the largest project on which any of them has ever worked.

The Edge mural is at 670 DeKalb Ave. NE on the Atlanta BeltLine in the Old Fourth Ward. The best view is from the bridge on Edgewood Avenue.

Stumberg got the phone call in late May 2018, and work on the mural began in November. The team finished on December 22. See more on the Old Fourth Ward section of the Atlanta Street Art Map and its Atlanta BeltLine Eastside Trail Walking Tour. The mural at Modera Midtown by artist Greg Mike (All images by streetartmap.org) This column is a collaboration between ARTS ATL and Art Rudick’s Atlanta Street Art Map. We’d like to hear from you, too. Make comments and suggest murals, artists or neighborhoods we should spotlight. Please email kathy@artsatl.org.

The mural at Icon Midtown by artist Alex Brewer, aka HENSE The mural at Highland View by artist Ryan Coleman The mural at Broadstone Yards by artist Michael Jones, aka letter75