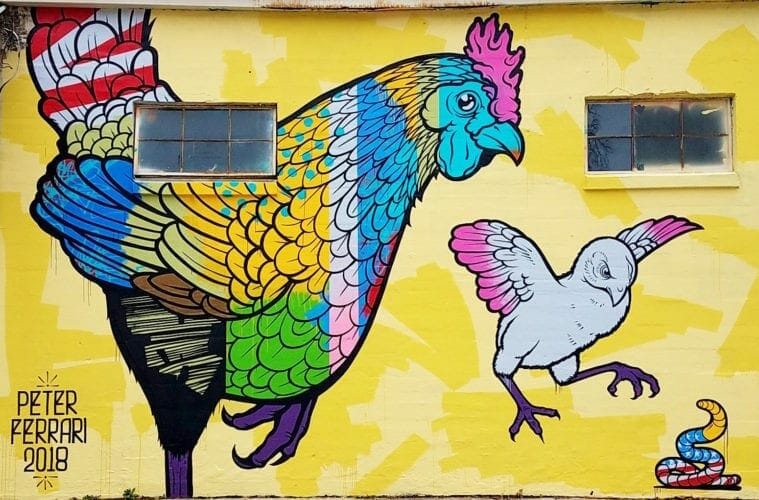 This Peter Ferrari mural is on the ZZ Pest Control Atlanta building at 701 Edgewood Ave. SE.

This week in street art: Follow us south of the BeltLine’s Eastside Trail

If you like what you see, you might want to look at Parts 1 and 2 of this series — eight of the 60-plus murals on the 3.1-mile trail and eight murals off the trail between Virginia Avenue and Ralph McGill Boulevard.

The BeltLine, the largest urban redevelopment project in Atlanta history and one of the largest in the country, will eventually convert 22 miles of abandoned railroad corridor into trails that circle the city and connect 45 neighborhoods. Onto the artists (in alphabetical order) and their work.

On his Instagram page, Tommy Bronx describes himself as “dad, artist and senior designer at ABV Agency and Gallery,” an experiential marketing agency, design studio and contemporary art gallery on Auburn Avenue NE. His walls, often dominated by an aqua background, feature graphics, words and elements — space imagery, a Halloween-style black cat, skull, shoes, dance steps, a woman in a martini glass — that not everyone would think of putting together. There’s a sly sense of humor at play, including on this wall at 716 Edgewood Ave. NE.

The Tommy Bronx mural at 716 Edgewood Ave. NE (All images by Art Rudick, courtesy of the Atlanta Street Art Map)

Peter Ferrari, a freelance painter and muralist living and working in his hometown, appears frequently in the column. You may know him by the name fastredcar. His work can resemble a mash-up of tangled plumbing pipes and vines, but the one featured at the top of this page and found at 701 Edgewood Ave. SE pops with color and the personality of a couple of annoyed birds. Ferrari is cofounder and curator at Facet Gallery in the Old Fourth Ward and founder of Forward Warrior, an annual public event that uses multiple artists to create a series of murals.

If the Matt Haffner wall at 930 Mauldin St. SE makes you feel antsy, you’re not alone. Haffner, according to his website, is a mixed-media artist whose gritty and graphic artwork ranges from documentary-style photography to large-scale installations to diminutive works on paper and, of course, murals.  He’s an associate professor of photography and video at Kennesaw State University and has a B.F.A. in photography from the University of Akron in Ohio and his M.F.A. from the Tyler School at Temple University. His work is represented primarily by Whitespace Gallery in Atlanta. Agostino Iacurci is an Italian-born, Berlin-based artist who paints, sculpts, draws and does murals and installations. This mural, done in 2013 in conjunction with Living Walls, focuses on brightly colored, larger-than-life characters. His goal: Convert this wall at 890 Memorial Dr. SE into a storybook page. See how the wall came together. The Agostino Iacurci mural on this wall at 890 Memorial Dr. SE Ricky Watts, a San Francisco-born visual artist, works out of a studio in Northern California. He began as a graffiti artist, is self-taught and is known for work that features fluid shapes and psychedelic colors that seem to move. Watts does everything from large-scale murals to intricate works on canvas. Watts’ sole Atlanta mural is at 701 Edgewood Ave. SE.

The Ricky Watts mural at 701 Edgewood Ave. SE is the only one in Atlanta by the California artist.