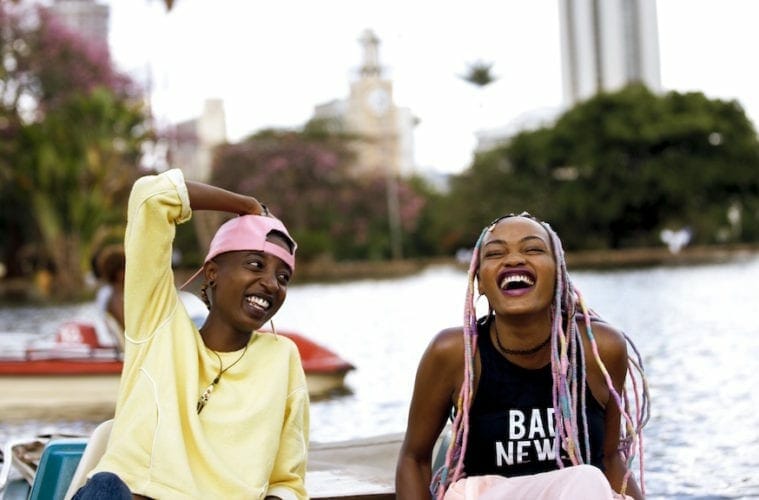 Rafiki, which tells the story of two young women in love in a country that criminalizes homosexuality, will screen Sunday, June 16. (Courtesy of Film Movement)

The end of June will mark 50 years since a police raid at the Stonewall Inn in New York City’s Greenwich Village neighborhood became the tipping point in the fight for LGBTQ freedom.

There were few public places that LGBTQ people could be completely open in 1960s New York, but the Stonewall Inn welcomed anyone living on the fringes of what society considered acceptable at the time — prostitutes, homeless teens, trans people, drag queens, and gay and lesbian people who refused to hide.

Police raids resulting in the unlawful arrests of LGBTQ people had become commonplace, but on June 28, 1969, Stonewall Inn patrons had had enough. They fought the police and built on their success with another protest the next night, sparking protests by other LGBTQ groups in the following weeks.

Within months, activist organizations were formed to build on what had been achieved, and within the next few years, the first gay rights groups were formed to take the fight all the way to the White House. The first gay pride march took place in June 1970 to commemorate the Stonewall Riots, and to this day, gay pride parades and marches are held in June to honor the bravery of these pioneers.

On June 14, 15 and 16, Out on Film, in coordination with Atlanta Pride, will present “50 Years of LGBT Cinema” — three days of classic LGBT films, screened at Out Front Theatre Company, to celebrate 50 years since the Stonewall Riots. The screenings are free.

ARTS ATL recently spoke with Out on Film director (and ARTS ATL contributor) Jim Farmer about how this festival within a festival came to be and its importance to the LGBTQ community.

ARTS ATL: Why did you decide to do the “50 Years of LGBT Cinema” film series?

Jim Farmer: After the Out on Film team finished our 2018 festival and started to look ahead to this year, we realized this was the 50th anniversary of Stonewall. We knew we wanted to do something special. We applied for, and received, a grant from Atlanta Pride Committee to do the “50 Years of LGBTQ Cinema” series. Atlanta Pride is an organization that we work with often, and it was an opportunity to partner with them again and give the community 10 free LGBT-themed films.

ARTS ATL: How were the films chosen?

Farmer: Our primary goal was to showcase films from all the decades post-Stonewall — the ’70s, ’80s, ’90s, 2000s and 2010s — to get a sense of how LGBT-themed movies have changed over the decades. It was also vital to have balance in our schedule, with comedies and dramas, even one musical, and reflect the diversity of our community. We wanted to program classic films, but we didn’t want to go for the obvious all the way around. So we’ve included some features people might not be familiar with, such as Living With Pride: Ruth Ellis @100, Save Me, Brother to Brother, Rafiki and Saturday Church.

Stonewall is a huge deal this year, and we knew there would be a lot of talk about it in June, and lots of organizations would be planning events. We wanted to stay away from the actual history of Stonewall and focus instead on entertainment and how the Stonewall rebellion had an effect on cinema.

ARTS ATL: Can you tell us a little bit about how the film series is structured?

Farmer: We started the series in April with the ’80s and La Cage aux Folles, and continued it in May with Desert Hearts, but the bulk of the series is this weekend.

The ’90s are represented June 14 with Living With Pride: Ruth Ellis @100 and The Watermelon Woman. The 2000s are represented June 15 with Save Me, Brother to Brother and Shelter. And we close June 16 with the 2010s and a triple feature of Saturday Church, Rafiki and Pride. Rafiki is a new film that made a splash at Cannes last year. It’s about two young Kenyan women in a relationship, and the film was initially banned in Kenya.

ARTS ATL: Do you have a favorite LGBT film or a film that you think is most important to LGBT rights and community?

Farmer: There are so many! Brokeback Mountain was a landmark film in so many ways, as were Carol and Moonlight and hundreds of others. Those films are universally acclaimed and reached so many people.

Pride is one of my favorite films — it’s just beautifully done. Some of my other personal faves are The Wedding Banquet, Bound, Paris Is Burning and Mysterious Skin.

We tried hard to get the rights to Paris Is Burning, but the rights were initially in limbo as the film was getting ready for a rerelease this summer. Luckily, we were able to collaborate with Jon Dean and WUSSY Magazine’s new Queers on Film series for a screening of it on June 17 at the Plaza Theatre as part of Atlanta Pride’s Stonewall Month activities.

ARTS ATL: Why do you think film is such an effective medium for advocacy and social justice?

Farmer: Films highlight individual experiences and tell those stories that provide a connection for people. Once it’s personal, these larger causes and issues become less abstract. So film provides the vehicle for people to develop empathy.

ARTS ATL: How far do you feel the LGBTQ+ community has come, in terms of portrayals on screen, since the Stonewall Rebellion?

Farmer: Traditionally, LGBT characters throughout the history of cinema have been portrayed negatively, getting murdered at the end, killing themselves or just having miserable lives. It was horrible — for me and others — growing up and seeing such negative, pessimistic portrayals.

When LGBT characters started showing up more prominently in films in the ’70s and ’80s, it was often the same way. We had movies such as Cruising and then AIDS-themed films where all the major characters died. The good news, though, is that during that era, we also began having positive portrayals as well. In the ’70s, La Cage aux Folles dared to feature a same-sex male couple at its center, neither of whom met horrible fates. In the ’80s, Desert Hearts was a classic lesbian-themed film that featured a rarity, something of a happy ending.

ARTS ATL: And what do you hope people take away from the films you’ve selected for “50 Years of LGBT Cinema?”

Farmer: All the films in the series are significant and diverse in their portrayals of LGBT individuals. It’s important for us to showcase positive images of the LGBT experience, especially in this political climate. It’s always great when someone watches a film and — maybe for the first time — sees themselves and realizes they are not alone. We also offer community [through] the ability to see and experience these films with others.