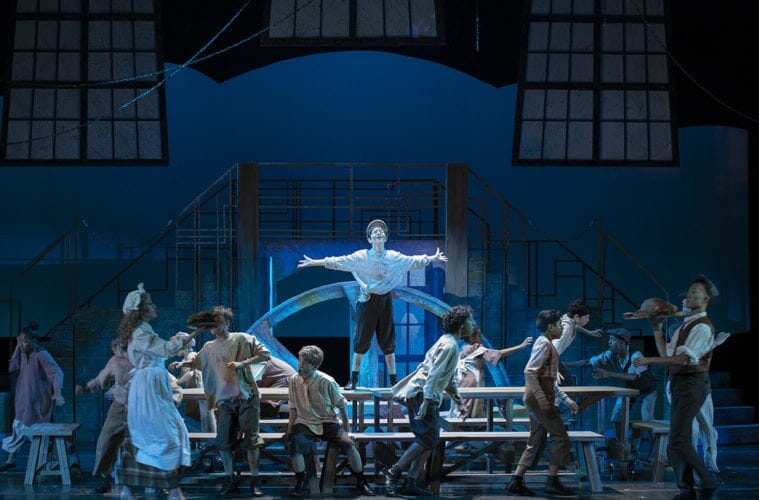 Although she still acts — seen most vividly a few years ago in Serenbe Playhouse’s Cabaret — Heidi Cline McKerley spends a bulk of her time these days directing. While she’s reliable in whatever genre she’s working in, her musicals almost always seems to spring to life. That’s definitely the case with her new version of Oliver!, a production running through June 23 at Atlanta Lyric Theatre. The show overcomes some bumpy patches early on to become a generally pleasant production.

One of the most beloved musicals around, Lionel Bart’s Oliver! is known for such popular numbers as “Food, Glorious Food” and “Consider Yourself.” Adapted from Charles Dickens’ Oliver Twist, it premiered in the ’60s in London and on Broadway and later spawned an Oscar-winning film. Its central character (played by Vinny Montague) is a boy in search of a family. He is taken from his workhouse after he asks for more food and eventually winds up among a group of kids who work for Fagin (Jeff McKerley), who teaches his charges how to pick pockets.

The rest of the colorful characters include the violent Bill Sykes (Brian Kurlander), who used to be one of Fagin’s kids; his wife, Nancy (Jennifer Alice Acker), who takes a liking to Oliver; The Artful Dodger (Colby Howell), who introduces Oliver to Fagin; Mr. Brownlow (Rob Roper), Oliver’s grandfather; Mr. Bumble (Daniel Cook), the beadle of the workhouse; the Sowerberrys (Joseph J. Pendergrast and Candy McClellen), who take Oliver in initially; and Mrs. Bedwin (Jill Hames), who is Mr. Brownlow’s servant.

It takes a while for this staging to take off. The first 30 minutes feel a little generic and lack in energy. The production finds more able footing when Mr. McKerley shows up as Fagin and when Acker bows as Nancy. These two seem to elevate the show, and from there, it’s fairly smooth going.

Working with such a huge scope and ensemble (well over 20 performers) could make the show feel cluttered and out of control, but director McKerley avoids that. A lot happens, but it never feels too busy. Outside of the beginning stages, Oliver! is paced satisfactorily and, for a heavy show that runs well over two hours, largely flows. Throughout her long career — including one of my all-time favorite shows, Horizon Theatre’s The Toxic Avenger — McKerley has shown she knows how to balance spirited numbers with effective characterizations. This isn’t a career work for her, but it’s nonetheless quite solid.

Music director Cristina Dinella brings life to much of the score, including the showstopper “Consider Yourself,” led by Howell, Montague and the ensemble. Mr. McKerley and Acker also expertly tackle their numbers. As potent as the musical numbers are, though, I do wish that Atlanta Lyric Theatre would use a live band instead of prerecorded music.

The collaboration between director McKerley and choreographer Bubba Carr is particularly impressive. Carr’s animated choreography heightens many sequences and matches the action of the show yet never feels overdone and forced.

Mr. McKerley has been seen in countless Atlanta Lyric Theatre productions over the years and is usually one of the most memorable elements. That’s certainly true here. Having a great time, he makes his Fagin conniving and devilish in songs such as “Reviewing the Situation.” Yet Acker almost steals the production. Her Nancy is nurturing and wounded. After she has been attacked by her husband, she delivers a plaintive “As Long as He Needs Me.” Kurlander and Howell also stand out in a huge cast.

Lead performer Montague has been in a lot of productions of late, most notably Falsettos at Actor’s Express. He is very talented young actor, and it’s nice to see him move from the supporting ranks to a leading role. He has a nice enough solo with “Where Is Love?,” but it doesn’t help that he is dwarfed a bit by his adult costars. Next to the likes of Mr. McKerley and Acker, it’s hard for anyone to make a real impression.

How Oliver! holds up over the years is debatable. I’ve always admired the show more than loved it. For a musical that is so mainstream and kid-friendly, it has some undeniable dark themes and edges, such as slavery and a particularly violent murder at the end. Yet, none of the kids in the audience (nor their parents) the afternoon I attended seemed to mind the clashing tones.

Oliver! closes the 39th season for Atlanta Lyric Theatre. The company never tends to stray too far outside of its comfort zone, and Oliver! is up its creative alley. Luckily, it’s also managed to get Mrs. McKerley on the directing mound.