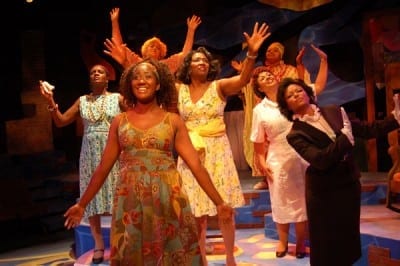 Review: After 22 years, Horizon’s “Shakin’ the Mess Outta Misery” gets a raucous homecoming

Shay Youngblood’s “Shakin’ the Mess Outta Misery” is a celebration of the strength and wisdom of African-American women overcoming oppression and violence in the segregated South, and tells familiar stories of endurance, humor and perseverance. A warm-hearted and laughter-splashed performance brings the play back to Atlanta’s Horizon Theater, where it premiered in 1988. It was the first-ever world premiere for Horizon, and launched the career of playwright Youngblood (pictured below), a native of Columbus, Ga. The spirited ensemble of actresses in the current production, which will continue through August 22, holds deep connections to the original show. Through interconnected stories, the play looks at the turnings of history through the lives of the community of black women. They share the nurturing and teaching of a young woman whose mother has abandoned her. Drawing on folk wisdom, the Bible and earthy sexual experience, the women initiate the character known simply as Daughter into adulthood. Their lives reflect the community’s struggles through the civil rights era to hard-won freedom.

The action unfolds in a small Southern city, which often sounds like the Atlanta of “Driving Miss Daisy,” although it could be any segregated city of the era. One scene that veers from rich comedy to a horrifying tale of white brutality looks at the historical reality of  black women riding special buses to the white part of town to serve as maids. The scene shows a strength of the play in laughing at the foibles of the black women as well as at the blindness of the whites who employ and condescend to them.

While the destructiveness to the black community of alcohol, illicit sex and violence is acknowledged, the play looks at such behavior with compassion and humor rather than judgmentally. The roles of music, religion and African heritage in black life are richly evoked. Seasoning the show with sardonic laughter are stories of silent, passive-aggressive rebellion against the humiliations and violence inflicted by whites. The production bursts with visual excitement, too, such as when multicolored scarfs fall from the ceiling for a frenzied dance number. The women’s frequent dancing turns from joyous to frantic, their pleasure intertwined with pain.

The constant motion can feel unfocused and chaotic, but overall it pulses with warmth and joy. With its multiple characters and stories, “Shakin’ ” drifts into a series of vignettes, losing cohesion. The narrative momentum lags when the characters give first-person, expository reminisces. More effective are scenes built on dialogue and interaction between them.

After intermission, dramatic intensity builds to a fever pitch with the unfolding of the haunting and tragic story of Fannie Mae, who is Daughter’s mother. Without speaking a word, Danielle Deadwyler gives the most powerful performance of the evening, portraying Fannie Mae with a dancer’s grace and acrobatic daring. A stunning display of gymnastics, performed by Deadwyler as she dangles from two banners hung from the ceiling, shows the primal capacity of theater to thrill audiences.

Amber Iman, who plays Daughter with occasionally overdone exuberance, has a nearly lifelong connection to the play. As an 18-month-old, she was a constant presence at the theater when her mother, Margo Moorer, performed in the original Horizon production. Moorer is back in the current one, moving from a youthful original role to that of Aunt Mae, a ribald lover of life. Moorer glows with the enduring vitality of an older woman who continues to pursue pleasure and laughter, even in the shadow of illness.

Another cast member with a long connection to the play, Andrea Frye — who directed a second Horizon production in 1989 — impressively carries the key role of Big Mama, Aunt Mae’s sister and the play’s moral center. Sustained by her deep religious faith, she is Daughter’s primary caregiver.

Stage director Thomas W. Jones II’s production flashes with energy, with each character allowed to exhibit a strong, unique personality. He has the characters at intervals leave the stage to perform from the audience, effectively using a technique that falls flat in some productions.

After 22 years, the revival of “Shakin’ the Mess Outta Misery” feels like a reunion, where family stories are retold with laughter and tears by mothers, daughters and sisters. In Youngblood’s metaphorically vibrant language, it tells of intimate times and shared rituals, the tidal flow of generations.