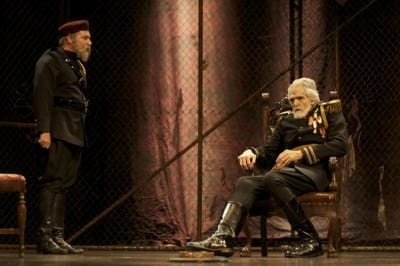 Explaining his love of playing King Lear, Tim McDonough looks back fondly to those 18th- and 19th-century touring Shakespearean actors who played the same few roles throughout their lives. “If I were one of them, King Lear is one of the roles that I’d want to be doing,” he said. “It’s a role to grow into. It’s a role that attracts me and that I love.”

Georgia Shakespeare’s new production of “King Lear” will mark the fourth time McDonough has undertaken the demanding role of the elderly king who tragically decides to give up his kingdom to his daughters. The play opens July 9 and will continue through August 7 at Oglethorpe University’s Conant Theater, in repertory with “Shrew: The Musical” and “Love’s Labour’s Lost.” Producing artistic director Richard Garner said that he decided to return to Lear for Georgia Shakespeare’s 25th summer because the company also produced the play in its first season, when the actors performed in a tent pitched on what is now Oglethrope’s baseball field. McDonough (at left), who first played Lear in 1984, returned to the role in Georgia Shakes’ 1995 production and again five years ago in an experimental rendering of the play that he developed at Emory University, where he teaches acting.

This season’s performance of “Lear,” directed by longtime Georgia Shakespeare associate artist Sabin Epstein, will be completely different from the company’s last production of the play, Garner said. “The plays are 400 years old, but we try to leave the audience with the impression that it’s a new play each time we work on them,” he said.

Taking a break from rehearsing “Lear,” as well as gearing up for performances of “Shrew” and “Love’s Labour’s Lost,” McDonough reflected on Lear’s challenges. “It’s daunting and humbling to think about it,” he said. The difficulty, he said, comes from portraying a character who reaches 80 and finds that he has “never really lived. He still needs to find out, as a child needs to find out, what it is to have real relationships, how to love. He’s an 80-year-old person who has never grown up.” As a long-reigning king, Lear has received constant deference and flattery. Suddenly, the trappings of power are stripped away. “People say yes and no to him on cue, and you can’t grow up like that as a person. … The role is a big canvas that way, and a big journey that he has to make. He’s very powerful, yet very fragile and vulnerable. You have to do your homework about what you bring in each scene.”

Unlike in other tragedies, Lear’s downfall “starts in the very first scene,” McDonough said. “He takes five acts to fall; he’s in free fall for all of that time.” The play is a kaleidoscope of moods. “Each of the obsessions needs to be specific. Each of them burns in a different way.”

McDonough said he has a deeper understanding of the role now that he’s 67, nearer Lear’s age. “You have more of a sense of history; the ground shifts under your feet. My sense of mortality is more vivid and present that it is for a younger person, for whom it’s more abstract.” (Sketches for Lear and Cordelia by costume designer Christine Turbitt; set model by scenic designer Angela Balogh Calin.) Under Epstein’s direction, this Lear “is more virile at the beginning and more fragile at the end, and a bit more of a wanna-be father than some of the Lears I’ve played,” McDonough said. One key change is his interpretation of the culminating tragic scene with Lear’s daughter Cordelia, whom he rashly rejects at the beginning of the play although she is the only one of three sisters loyal to him. At the end, he reconciles with Cordelia, whose death comes as a shock to the audience and brings Lear despair.

“It’s taken me all this time to come over and to play the most basic version of that,” he said. “It’s a little bit more to the heart of the matter, a little bit pure.”

This version of “Lear” will be set in the 1930s, with generic uniforms evoking that era, Garner explained. The action in the play of armies crossing borders is similar to the political volatility of the ‘30s, he said. “We’ve tightened it, but are not trying to reshape the story,” Garner said, for he agrees with those who see “Lear” as the highest work of the imagination ever created. “As a work of art, just for me, it’s the top of the mountain.”