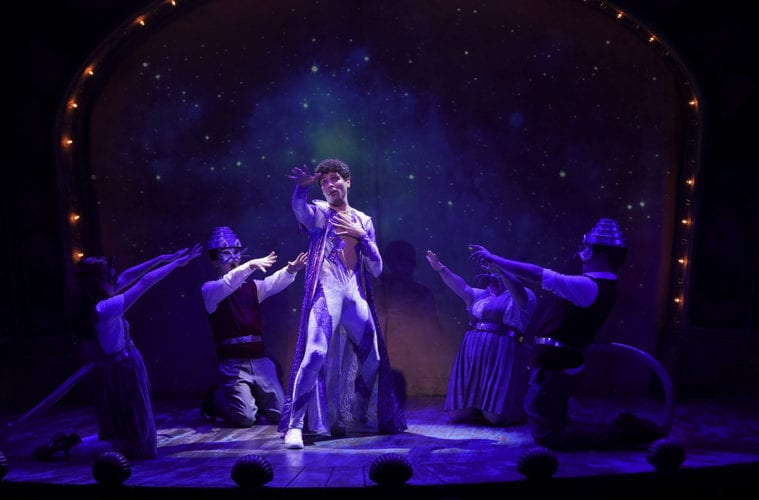 Scott Redmond plays a teen who dreams of being a sexy superhero on a cat planet in Ride the Cyclone. (Photo by Chris Helton)

Every week, our editors and guest writers give you their top six picks for the weekend’s best shows. This weekend, big names in comedy perform at secret locations, and spoken word meets museums.

Looking for more? Be sure to check out our metro Atlanta theater map to see a full list of professional theaters by county.

Mystery Location in Old Fourth Ward, Don’t Tell Comedy In this national comedy sensation, top-notch comedians perform in a secret, Instagram-able location. Purchase a ticket and then receive an email at noon on the day of the show with the location. BYOB. May 25 at 7:30 p.m.

Aurora Theatre, Memorial Day Weekend Comedy Spectacular Jeff Shaw headlines this weekend of hilarious comics in the suburbs. Shaw has been touring for 30 years and helped launch the Punchliner Comedy Club for Carnival Cruise Line. The show will feature Travis Jones, an Atlanta favorite, and the return of Kelly Spillman, an Aurora Comedy Nights regular who has been plying her trade in Los Angeles for the past few years. May 24 and 25.

Alliance Theatre, Ride the Cyclone In this zany, fun musical, the Saint Cassian High School Chamber Choir boards the Cyclone roller coaster at 6:17 p.m., dying minutes later when the front axle breaks, sending them to their tragic demise. When they awake in a strange purgatory, a mechanical fortune teller invites each to tell the story of a life interrupted, with the promise of a prize like no other — a chance for one of them to return to life. Through May 26.