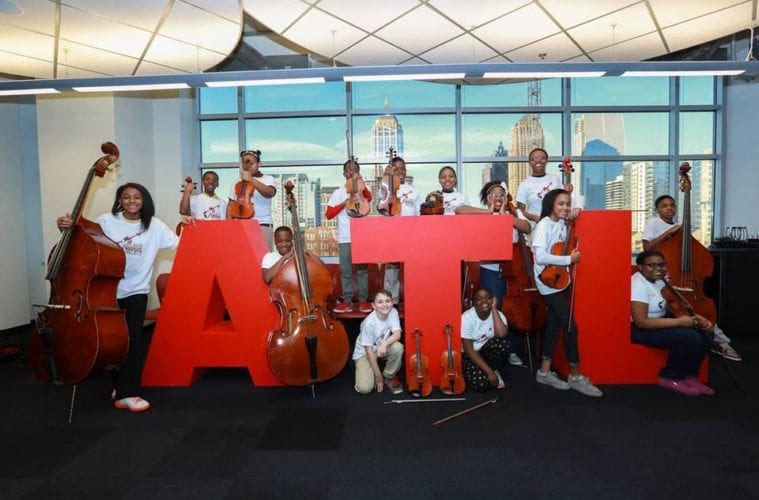 Like most 17-year-olds, Alivia Carter is an amalgam of contradictory elements.

She is slouched in a chair while waiting for a recent rehearsal to begin with the Atlanta Music Project’s Youth Orchestra. Her uniform of ripped jeans (revealing as much flesh as denim), high-top sneakers and earbuds piping music in while keeping outsiders at bay signifies her youth.

It hardly signals that Alivia is one of the most promising young bassists in the state. She has performed with the Harlem Quartet, R&B icon Monica and under the baton of Atlanta Symphony Orchestra music director Robert Spano as part of the Los Angeles Philharmonic’s National Take a Stand Orchestra.

She is fluent in the canons of classical and jazz music, but she is not immune to the charms of pop music nor the theatricality of electric violinist Brian King Joseph. Sensitive and prone to thinking before she speaks, the high school junior is as grounded and statuesque as the double bass she plays. Her situational awareness and cat-like instincts indicate a maturity that exceeds her years. And when she stands up to play, you get the full measure of the musician as the seemingly disparate aspects of her personality coalesce. “Alivia’s sound on the double bass is big, bold and melodic,” says Dantes Rameau, executive director of the Atlanta Music Project, an intensive, tuition-free music education program for underserved youth. “She is very mild-mannered and quiet in social settings, but when she plays the bass, she’s a different person. It’s important that she has a way to express another part of who she is in different contexts, and it’s very cool to see.”

Though Alivia’s musicianship may net her a college scholarship (she is one of the first Atlanta Music Project students eligible for the AMP Endowed Scholarships at Clayton State University), there are other tangible changes that playing the double bass has brought into her life. “When I was younger, I probably couldn’t talk to you like this because I was super shy,” she says. “I’m still shy, but playing the double bass lets me feel a little bit more out of my skin and has given me confidence.”

In a paradigm where practice makes perfect and perfecting ones technique can lead to college scholarships, world travel or Carnegie Hall, Rameau says it is critically important for aspiring musicians like Alivia to have a place and the means to explore their dreams. And the Atlanta Music Project’s potential footprint just grew much larger today when it opened a new state-of-the-art facility in Capitol View that will give the organization its first real home base.

Empowering children to realize their highest potential by providing equal access to superior music education in their own neighborhoods has been the organization’s mission since it was cofounded in 2010 by Rameau and Aisha Moody, director of AMPlify, the project’s choral music program. Rameau received an ARTS ATL Luminary Award this year for Arts Education.

No prior musical experience is required of prospective students, and admission is not based on auditions. Each student receives an instrument, group or individual instruction by professional teaching artists and multiple opportunities to perform live. And recruitment drives take place wherever children are gathered —  from classrooms to playgrounds. When Rameau spotted Vivian Carter and her daughters Alivia, Lailah and Mya in Perkerson Park seven years ago, he identified the prototype of a dream family.

“I found the total package in Ms. Carter and her girls [then 10, seven and five years old, respectively],” he says. “She is the kind of parent who is willing to do whatever it takes to grant her children the best opportunities. She has hard-working kids with lots of natural ability and the discipline required to master a musical instrument. And Alivia, Lailah and Mya are committed to making the most of their proximity to world-class music instruction that was free of charge.”

Today, the girls are a triple threat. Lailah, a violinist, traveled to Mexico City in February 2018 alongside Alivia as part of a 150-member youth orchestra to play under conductor Gustavo Dudamel. She and Mya, also a violinist, performed with the Piano Guys at the Cobb Energy Performing Arts Centre last fall. Alivia, in addition to her other exploits, has participated in the Georgia Music Educators Association All-State Orchestra three times.

Though it may seem counterintuitive, turning out professional musicians has never been the project’s primary goal. Instead, the program seeks to impart life skills that can sustain young people — regardless of future academic or career paths — by teaching them how to problem-solve, master complex tasks and grind out results. The expectation that children strive for excellence aligns perfectly with the Zen philosophy that the way a person does one thing is the way they do everything. Inside the new home of the Atlanta Music Project

Three hundred and fifty students, some of whom have been enrolled since the project’s inception, are enrolled this year to learn the value of doing things the right way. The staff comprises 10 full-time administrators and 50 professional educators and musicians. For the past nine years, the program’s primary office space has consisted of two desks at the Atlanta Symphony Orchestra’s home base at the Woodruff Arts Center.

That changed today when the Atlanta Music Project Center for Performance & Education opened its doors in Southwest Atlanta to give students, faculty and staff a dedicated space for instruction, rehearsal and performance. The first community school in Atlanta, the new center follows in the tradition of creative hubs like the Community Music Center of Boston, Philadelphia’s Settlement Music School, Chicago’s Merritt School of Music and Washington, D.C.’s Levine School of Music.

The Next Movement capital campaign was launched last winter to put the Atlanta Music Project on sound financial footing and has already secured $2.5 million of its nearly $3 million goal. Attorneys at Sheley, Hall & Williams worked pro bono to negotiate a 12-year below-market lease for the 7,500-square-foot building. The Chick-fil-A Foundation oversaw early project management and provided real estate executives to help negotiate and plan the build-out of the one-time supermarket that had been shuttered and become an eyesore for over a decade.

Anthony “Tony” Vincent Pope, principal architect at atelierseven, oversaw the interior gut renovation and redesign. And in the coming weeks, an artist will be commissioned to revitalize the once-drab corner of Dill and Hartford avenues with a vibrant outdoor mural.

In an effort to understand the lay of the land before formally establishing the project’s presence in the Capitol View neighborhood, Rameau and Moody attended community and block association meetings and neighborhood planning unit sessions. They say the local response has been positive. “Great schools, great families and great parks are what make a community great,” says Rameau. “We’re just happy this great music building can be part of a thriving ecosystem without displacing long-standing, legacy populations.” The new headquarters of the Atlanta Music Project

The single-story structure will feature a reception area, quiet zones for study and a sheet music library. There will be a green room for visiting artists, a 2,500-square-foot performance hall and broadcast quality sound, lighting and camera equipment on deck to facilitate livestreaming of concerts and lectures online. And the pièces de résistance are 10 sound-isolating rehearsal rooms designed by the Wenger Corporation — an industry leader in equipping music schools and conservatories — in which students can refine their skills individually or as part of an ensemble.

“Future leaders are going to be mentored in this hall,” says Rameau. “In the world of music conservatories, this space is sacred. People take pride in shedding here. It’s like going to the gym and having a great session. You come out a stronger player, and everybody in the gym respects the effort.”

“AMP students will be prepared for whatever comes next,” says Moody. “I’m fine if they don’t get it now — that’s just the nature of being young and taking things for granted. But once they go out into the world, gain perspective and look back, they’ll appreciate the significance of this facility and the lessons learned here.”

Then again, if they’re anything like Alivia, they already know the score. “Playing music also helps me focus and think differently,” she says. “There have been times when I’ve resolved a problem — at school or in life — and thought to myself, If I didn’t know music, I would never have figured this out. I thank my momma for pushing me because without her I wouldn’t have signed up for this.”

(For a short video of Alivia performing, click here.)