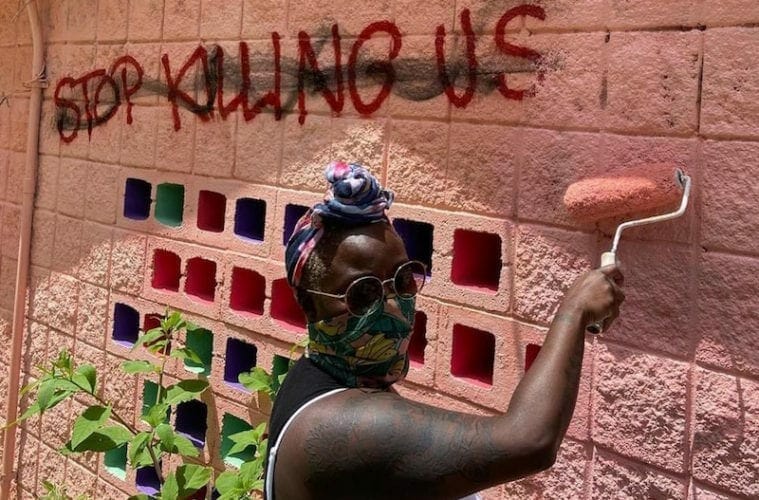 Atlanta artists have this uncanny, unwavering stick-to-it-ivness. There’s a physicality to creating and producing, especially in public spaces. The exception is when the exertion must be replicated again and again. That’s been necesssary more and more often in recent months by an uptick in defaced public art.

Par for the course? Maybe.

One thing Atlanta’s public artwork — murals, sculptures, installations — does well is create conversation. Whether you approve or disapprove, are comforted or discomforted, there’s a message to be gleaned. But we have to be able to see the work.

Vandalism is not new. It can be sporadic or planned, known or unknown. No official stats exist. Intention is what we’re dealing with here. There’s a language of defacement, according to artist Shanequa Gay, who’s just finished restoring her Reframing Herstory (2019) mural on Edgewood Avenue at the Georgia Beer Garden. 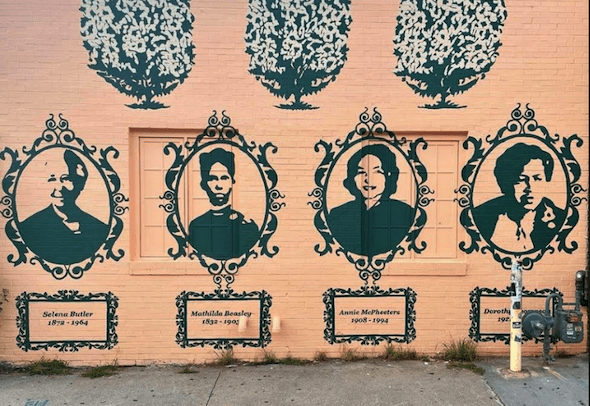 Who would deface a mural of four innovative Black women from Georgia? A photographer friend broke the news to Gay when he saw voter-related posters on top of it. Gay learned that an unnamed voting initiative considered the posters part of its own public–art project. Surely a mistake and not permanent, right? Wrong. Some city workers — not archivists or anyone sanctioned by the city’s Office of Cultural Affairs — figured the best way to remove the posters was by blowtorch. Gay believes strongly that there must be a language of sacredness for public art from the top down and the bottom up.

She started talking and posting about the vandalism, as did other artists. There have been deeper, more targeted messages. For Gay, disturbing obscenities against womanhood go back to 2017, when her work was part of Cabbagetown’s annual Forward Warrior Mural Project.

“It’s punching down now instead of fighting up”

John Dirga, chair of Cabbagetown neighborhood’s wall-keepers committee, maintains the relationship between the neighborhood and CSX train’s retaining wall, aka the Krog Tunnel. There’s the Tunnel free wall inside the tunnel versus the curated murals outside it. For good reason, there are undisclosed anti-graffiti measures. Dirga, a resident since 1996, has seen a shift. The political messaging of 2016 seems to have had an impact on how freely some taggers are acting.

There used to be more “punk-rock, anarchist messaging, fun irreverence, you know, anti-Establishment stuff,” he said. “We’ve always had people with a can of spray paint wanting to share their thoughts and feelings. But it’s punching down now instead of fighting up.”

The Stacks Squares Mural Project, a rotating art exhibit at Carroll and Tennelle streets, has been targeted more than once. A SOFAHOOD mural in memory of Rayshard Brooks — shot and killed by Atlanta police in June 2020 — was first painted over with the words “DEMON THUG.” 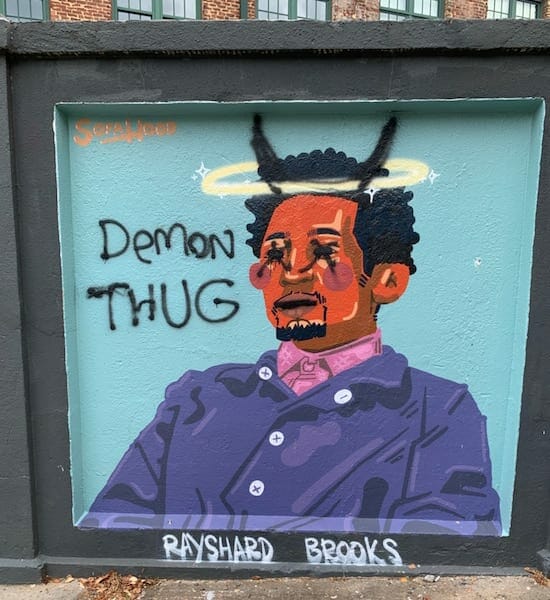 It was hit again a few weeks ago, as were others. Artists responded but chose not to show the damage vandals had done. The “white supremacist hatred,” as Dirga called it, was buffed out. He took to Instagram after finding seven murals vandalized. “Cabbagetown won’t stand for repugnant ideas, or resentful tags on our walls,” he said, “nor will we post photos glorifying toxic additions to beautiful artwork created by amazing artists.”

In an email to ArtsATL, SOFAHOOD called the acts tasteless, obviously racially motivated and extremely disrespectful. “If you have some opinion to share make your own art about it,” she said. “Don’t ruin another artist’s work.”

Arrrtaddict, whose indigenous representation mural on the Atlanta BeltLine’s Edgewood Bridge earned positive feedback this year, has been tagged three times. She doesn’t think the taggers realize they’re damaging the work of upcoming artists. “I would love to figure out who these kids are and say, ‘Hey, if you really want to paint, come help me. Let’s do a mural together. Let me show you how to submit a proposal. Let me show you what you need to do so you can get a wall, too.”

Curator Courtney Brooks’ 2020 Journey of a Black Girl project featured multiple installations, including a clubhouse that worked as a pop-up gallery. Yuzly Mathurin painted a mural there depicting a little girl with Afro-puffs. Soon after last summer’s protests, “Black Lives Matter” was spray-painted across it. 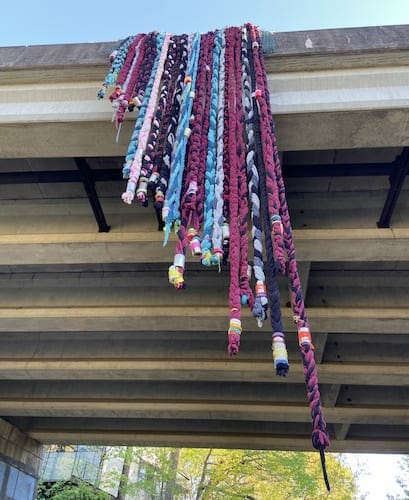 Courtney Brooks’ “This Crown Belongs to Us” fiber-art braids hanging in place.

Brooks agrees that the message matters but not in a way that disrespects Black art, she said. Her installation of 15-foot fiber-art braids — 26 of them — were affixed to the bridge in a way that should have made them untouchable. One day she received a call that one braid was missing and that a young boy had been seen with it.

She walked around the neighborhood to see if anyone knew anything. She came upon elders sitting and children playing outside a nearby apartment complex — like Journey of a Black Girl in living color. As she spoke to little girls doing hair, she explained who she was, told them what the art was about and talked with them about public art. They connected, but she never did find the boy with the braid.

“How can we find folks who have something to say?”

In some instances, 2020’s COVID-19 shut-in and the divisiveness across the country may have made public art more noticeable as a target. Karen Anderson Singer, the artist behind Tiny Doors ATL, has seen many of her 7-inch sculptures vandalized, some more blatantly than others. The rainbow door (Door 2, Atlanta BeltLine, Old Fourth Ward) has been tagged over the years; in the past year, however, the tagging began to overwhelm it.

Singer is less focused on those who’ve done the damage than on what changes she, other artists and the community can make to help taggers feel like their voices are heard. “How can we find folks who have a spray can, have something to say and give them a place to do it that doesn’t tear anyone else down?” she asked. In the past three months, she’s also noticed that people have visited Door 2 to spray in an arch that replaces the lost rainbow.

She wants to find more ways to engage young people, to talk about the story behind public art and how it’s brave to put your voice out there. When you’re young, you have no idea about permits or spaces to create freely. “There’s room that we can build respect here,” she said. “There’s room for all of us.” 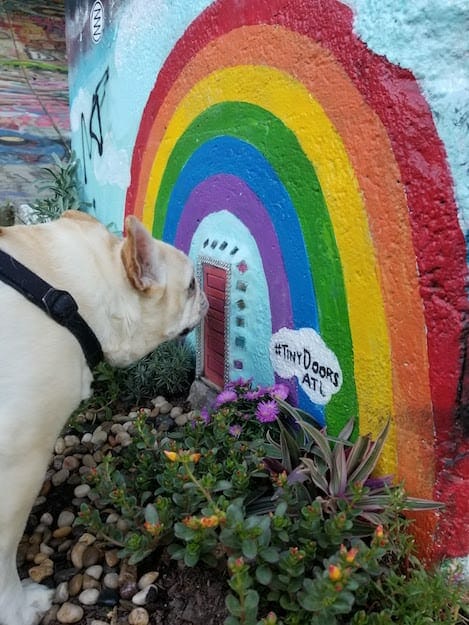 Tiny Doors ATL’s Door 2, with a visitor, as it looked before vandals damaged the rainbow.

In an email statement, Camille Russell Love, executive director of the city’s Office of Cultural Affairs, said her office has a conservation and maintenance team that routinely addresses graffiti on its public art. “The nature of public art is that it is in the public space and while most enjoy and appreciate it, there is an element that does not understand the impact of their destructive acts. Our hope is that through public education and the Cultural Experience Program, a collaboration with Atlanta Public  Schools and our cultural partners, we can expose the younger generation to art and its value.”

Miranda Kyle, arts & culture program manager for the Atlanta BeltLine, said similar observations and conversations are happening across the country. There are a lot of reasons public art gets vandalized, she said.

No one has all of the solutions, but Kyle thinks that providing access and giving young people ways to channel creativity is important. Those doing this are not bad people, she said. They’re just people trying to be heard.

“If we’re not constantly talking about how important the arts are, it’s a communal miscommunication,” Kyle said, “It’s important that we differentiate between vandalism, graffiti, street art and public art.”

Kyle asked a question worth addressing: “How do we want our public spaces to represent the best of us?”

This post has been updated to specify that Shanequa Gay’s Reframing Herstorymural is at the Georgia Beer Garden.