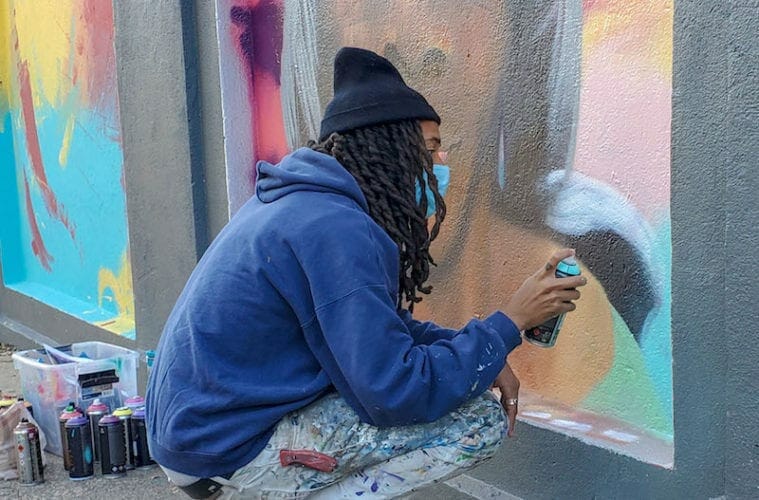 The goal of "Say Their Names," is to "humanize these victims and shed light on the need for police reform and accountability,” says curator Austin Blue, at work on one of his Stacks Squares murals.

Drive along Cabbagetown’s Carroll Street and you’ll see vibrant eyes and brilliant smiles memorialized on the walls of Stacks Squares. The themed exhibit, Say Their Names, features portraits of 10 Black lives that ended at the hands of police. Stacks Squares is a rotating mural project curated by artist Austin “Blue” Richardson (aka Austin Blue) at the corner of Carroll and Tennelle streets under the Fulton Cotton Mill.

Blue has curated the Stacks Squares Mural Project for three years. It’s sponsored by the Cabbagetown Neighborhood Improvement Association. Power Haus Creative, an Atlanta organization dedicated to ensuring authentic culture is represented and that the voices of diverse artists are amplified, sponsored Say Their Names. In past exhibits, Blue has opened applications for the 7 x 7-foot framed squares to artists eager to make a mark. This time, he says, he thought it important to use the project to increase awareness of police brutality and its effect on the Black community. “The goal,” he says, “is to humanize these victims and shed light on the need for police reform and accountability.”

The artists involved are both established and fresh: Charity Hamidullah, Sachi Rome, C.Flux Sing, SOFAHOOD and Blue. Each chose two people to memorialize, dating to 2006:

The Stacks Squares project has never before reflected a unified message or look. The portraits of faces young and old — a grandmother, a brother, a daughter, a friend — are all vivid reminders of lost lives and grieving families.

The all-Black roster of artists is intentional, Blue says. “It just makes sense. Who else is going to relate more to this specific subject than Black artists?”

Rome and Sofahood agreed to talk to ArtsATL about their panels.

Sachi Rome, an artist and art teacher, painted Korryn Gaines and Atatiana Jefferson. “I don’t march in protests,” she says. “I paint. Let us not forget a woman [Atatiana Jefferson] who was murdered in her own home by the police. Atatiana and so many others deserved so much better from America.” Atatiana Jefferson, 28, died in her home on October 12, 2019, when police in Fort Worth, Texas, were investigating why her front door was open. A neighbor had called them. Artist: Sachi Rome.

SOFAHOOD painted her second- and third-ever murals for Say Their Names, choosing to honor Rayshard Brooks and Aiyana Jones. “I chose Rayshard,” she says, “because he deserves to be seen all over Atlanta in a way that keeps his spirit home.” She chose Jones, she says, “because when I see a passersby, I cannot assume that they care about what happens to young Black girls, but I will make sure they see them nonetheless.”

The Say Their Names murals will be up at Stacks Squares for several months until, as is customary, a new group of artists and murals is curated. Details on the project or to apply, go HERE. Rayshard Brooks, 27, died June 12, 2020. He’d fallen asleep in his car in a fast-food drive-through. Atlanta police tazed and then shot him when he walked away. Artist: SOFAHOOD. Aiyana Jones, 7, died May 16, 2010, when Detroit police — raiding a neighbor’s apartment — shot her in the head. Artist: SOFAHOOD. Janisha Fonville, 20, died February 18, 2015. She was shot in her home by police in Charlotte, North Carolina, investigating her mental status. Artist: Charity Hamidullah.