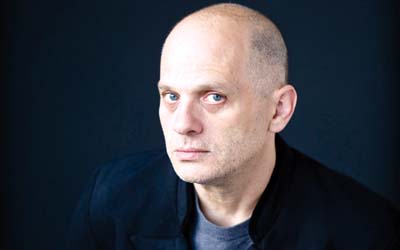 Like almost everyone who listens to contemporary classical music, I’ve been smitten and pained and overwhelmed by David Lang’s “The Little Match Girl Passion,” on the Harmonia Mundi label.

A 35-minute setting of the Hans Christian Andersen parable, where a poor girl freezes to death on New Year’s Eve on a city street, Lang’s Passion finds a model in Bach’s “St. Matthew” Passion and won the 2008 Pulitzer Prize for Music. It is heartbreakingly beautiful, very modern yet timeless, and through seemingly simple means — four singers, who also strike small drums or ring bells — conveys stabbing emotional truths.

I interviewed Lang (at left) this afternoon, primarily about another work — his “Sunray,” which will be performed January 22 in Atlanta when drummer Glenn Kotche and the Bang on a Can All-Stars, the new-music collective that Lang co-founded, performs a concert at Emory University.

Nevertheless, “The Little Match Girl Passion” became a focus of our talk. In conversation, Lang is a gentle and witty guy. He’s a do-gooder from the rebellious, rock-inspired classical fringe. He has more recently gained respect from the tradition-bound corners of the classical community — and the rebel in him still chafes at that. Here is a bit of the conversation.

ArtsCriticATL: “The Little Match Girl Passion” to me sounds sometimes like English Tudor choral music, especially in ways when the voices sing a glorious gothic chord and then one voice adds a note and the harmony shifts abruptly, and it gives the listener a little chill.

David Lang: I wanted it to be in the tradition of religious music. I wanted people to feel the weight of religious music, but not Byrd or from any one period. I feel like I’ve spent my life writing complicated music based on one line… I was really drawn to the way Andersen found a moral equivalency between the suffering of Jesus and the suffering of this poor abused little girl, always with a balance between suffering and hope. With this piece, there was a danger that it would get too contrapuntal, too polyphonic, and after the first section I realized if it was going to work, then I couldn’t out-Bach Bach. I had to get off that playing field completely. The comparison would not have been pretty.

ArtsCriticATL: I read somewhere that Bach is, in fact, special to you.

ArtsCriticATL: But that describes a style or really a structure, not a sound. How do you describe your “sound” — I can’t think of any consistency from you ….

Lang: You know, Steve [Reich] and Philip [Glass] do a remarkable job reminding you with every piece of what their commodity is. That’s not a criticism; their music is great. But I don’t feel an obligation about sound the way they do — that’s the skin. I didn’t become a composer because I loved sound. I first fell in love with the job of being a composer, and then I started writing music. My obligations are to my pre-compositional thinking, which is the skeleton. All my pieces have the same type of skeleton, but the skin is different….

ArtsCriticATL: So did the success of “The Little Match Girl Passion” change your thinking about composition? 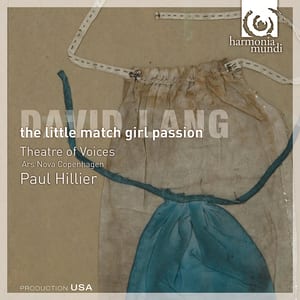 Lang: How I wrote music? No…. But to tell the truth, I had mixed feelings about it [the Pulitzer]. The very next day people started thinking I was smart and a good composer and listening to my older music, which is a lot like the music they suddenly liked because someone told them it was good. I got a little cynical, and immediately people contacted me to write very traditional pieces, a string quartet and so on. Like suddenly I was safe and of the establishment and it was OK to listen to my work. I’ve spent too much time with Bang on a Can trying to make other people happy, on a mission that’s not about my music. I feel very deeply that people need to have contemporary music in their lives like they have film and books and art. Maybe when thousands of happy people are at a concert and there’s a wild range of styles, then my own music will find its place.