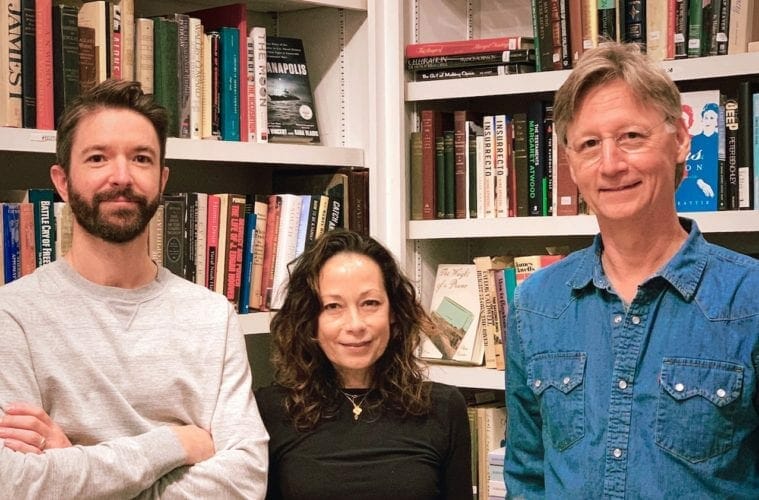 Marietta’s Antiques on the Square has a secret. And it’s not Sweet Melissa Records, the once unknown but now widely popular record shop tucked into the back of Jim and Melissa Kumpe’s retail space.

It’s a bookstore — an intimate and thoughtfully curated little bookshop sandwiched behind and between antique cameras and mid-century dinner plates, in front of and around 78s by everyone from The Beatles to Lana Del Rey.

The bookstore is the most recent manifestation of the couple’s business, and the third or fourth since they set up shop at 146 South Park Square in 1986.

“There was a drugstore here, and then Kay Jewelry moved in in the ’50s,” Jim Kumpe says. “Then another jewelry store came after Kay left when the malls came. We’ve been here since ’86, so not many occupants in this building.”

For years, the couple trafficked solely in antiques and collectibles in their small corner shop — they were part of a larger antique community in Marietta and often sold their wares to bigger  dealers who’d ship them to larger markets in New York. But they always had music playing in the background, old records from classic bands whose sound paired nicely with the creak of the wide-planked wooden floors.

Selling classic vinyl was a small but integral part of the shop’s antique and collectibles business, says Jim Kumpe, but then “word started getting out that we had records, and then the record guys started showing up. So that’s what started that community.”

Alchemy of old and new

The shop didn’t become a bona-fide independent record store until later, when a younger customer came in asking for something newer than Led Zeppelin IV. 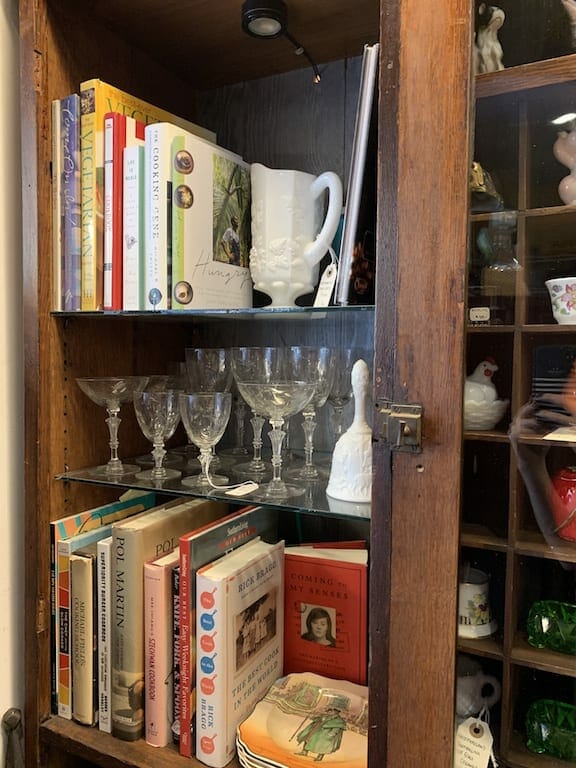 Jim Kumpe vividly remembers the young man asking if they had a new record by a current band. When Kumpe said it wasn’t in stock, the youngster said he’d go to another record shop that carried new artists. That led Kumpe to realize there was no reason not to carry modern records.

Thus, Sweet Melissa Records was born — an adoption of the new in service of the old, a slightly separate entity from Antiques on the Square but an integrated part of the  business. The newer attention to books is the result of a similar alchemy of old and new.

“We had that same ‘aha’ moment,” says Jim Kumpe. “We’d been selling classic books, and we’ve loved books forever. And we would both always go shopping for books for ourselves.”

“Jim traveled to Denver to buy cast-iron bookcases that came out of the Denver library,”  Melissa Kumpe interjects.

“But we were also disappointed in where we were shopping, not seeing the kind of thing I’d want to put in my bag,” Jim Kumpe says. “We were just disappointed in the choices.”

Few could blame him. The choices in quality independent bookstores with provocative, unique titles outside of the Perimeter are pretty bleak. There are a couple of independent shops but none that really rival Atlanta’s culturally monolithic A Cappella or true city institutions like Charis Books in terms of either selection or the communities they cultivate.

It was a literary gap that book lovers in that area of were desperate to have filled. And the Kumpes are quick to thank author Travis Nichols, their resident book curator, for helping them fill it. 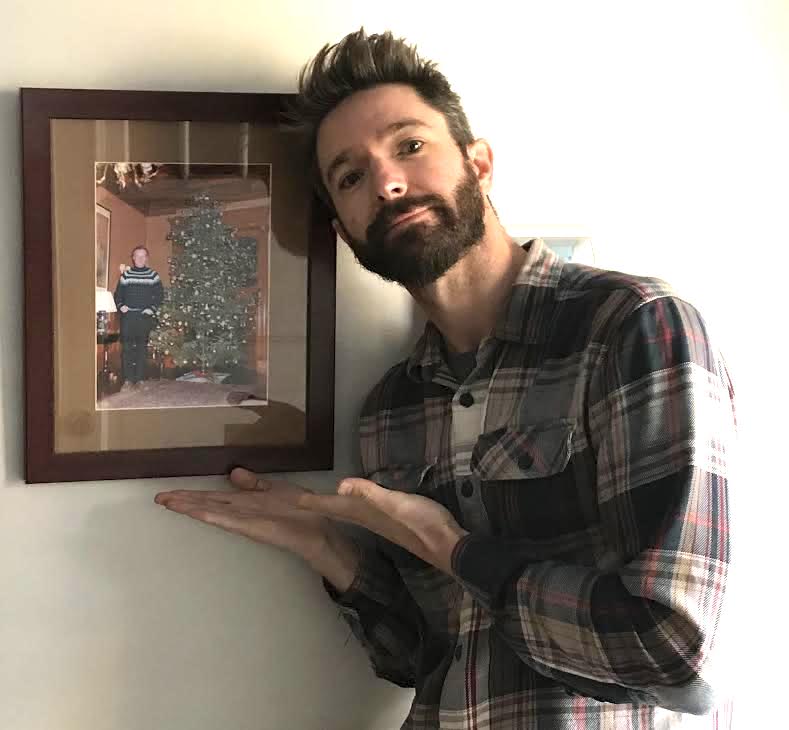 Travis Nichols with a Christmas photo of poet John Ashber.

Nichols’ wife — poet Monica Fambrough — grew up in Cobb County and visited the antique shop as a kid. When she and Nichols moved to Marietta, she encouraged her husband to visit the shop’s record collection.

Nichols left his email address with Kumpe, and a few weeks later, they had a more serious conversation about working together. They began by having Nichols sell some of his own collectible books at the shop.

“The first book we sold was a mid-19th-century calfskin copy of Henry Francis Cary’s translation of Dante’s Inferno,” says Nichols. “So that was a good sign. Then he found out I was Monica’s husband, and he got mad that I didn’t mention it earlier.”

To their surprise, the music-related books they originally stocked didn’t connect with customers but literary offerings and poetry did. “Luckily, that’s one of the things I know most about,” Nichols says. “Jim and Melissa have been kind enough to let me order freely and stock what I can from what I find at book sales in the area, so we’ve built up a pretty nice selection.”

“Pretty nice” is an understatement.

The artful, intentionally curated selection is unrivaled outside of I-285. The shelves are decorated with Instagrammable titles by powerful but obscure authors, poets and essayists that are diverse, poignant and culturally relevant. And they’re still intermixed with Jim and Melissa Kumpe’s staple antique classics. They’re also a reflection of a curator and owners who truly love books and who are dialed in to the zeitgeist in a very specific and thoughtful way. 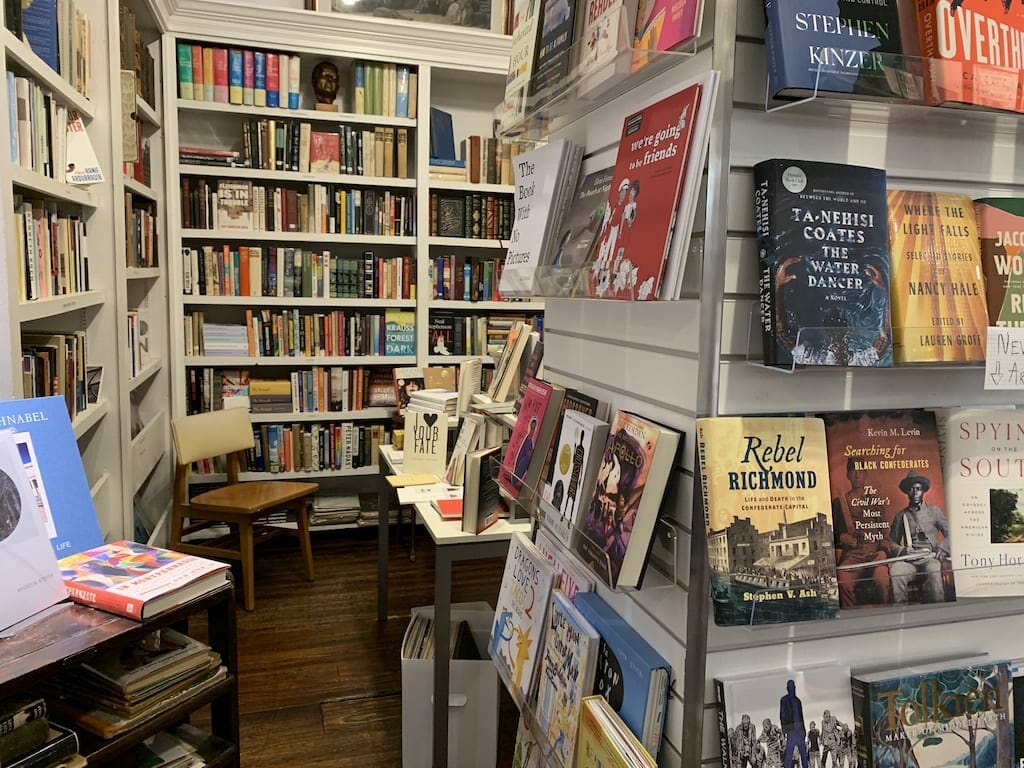 “Just about every book in the store is there for a reason,” Nichols says. “It’s more art than science. It’s not an algorithm.”

The selection is an odd amalgamation of books Nichols would suggest to a friend, an author his child is excited about or a recommendation from a frequent customer. “That helps build the community,” he says.

The physical space helps foster a literary community too. Books are tucked into intimate corners where customers are invited to browse, flip pages, sit down, look up from cellphones and converse with each other face-to-face.

“We like that it’s intimate,” says Melissa Kumpe. “It’s the experience. Absolutely. There used to be a store called Oxford Books in Buckhead. [Jim and I] spent hours just going through there. Sometimes we didn’t buy anything. That’s what we did on Friday evenings. We wandered through bookstores. It’s special.”

It’s also a relic of a retail philosophy, the idea that a bookshop should and could be a place where people who love stories and language can explore and share and connect with each other rather than hustle in and feel pressured to buy something. It’s a philosophy that seems only to exist now in public libraries, though it’s alive and well at Sweet Melissa Records and Books — a spot that isn’t trying to compete with either the big-box bookstores or the state’s more well-known literary institutions.