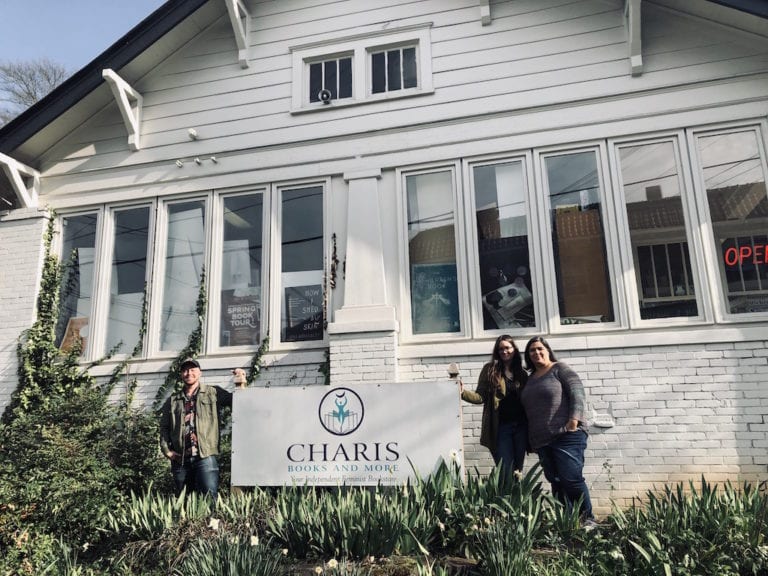 When she talks about the history of Charis Books and More, co-owner Sara Luce Look likes to say that she came with the building. “Because that’s literally what happened. I started full-time in 1994,” she says, “and I’ve been here ever since.”

That was the year Charis Books moved from its inaugural location at 419 Moreland Avenue to 1189 Euclid, the street Charis would call home for over two decades.

March 23 was the store’s last day at that location. After 45 years in Little Five Points, and some cake and a farewell send-off from the community, the feminist bookshop shut the doors of the Euclid Avenue location for the last time, emptying its shelves and packing books in boxes in anticipation of a reopening, a new beginning, at Agnes Scott College in Decatur on April 1.

Charis Books and More was founded in 1974 by Linda Bryant and Barbara Borgman.

Bryant and Borgman opened their doors with little business or retail experience but with a big vision and a mission to serve the Little Five community. They named their shop Charis, a Greek word meaning “gift” or “thanks,” in honor of a friend and ally who gifted them the money for the Moreland Avenue building.

Throughout the 1970s, as the country’s social culture and political landscape were beginning to shift, so too was the purpose Bryant wanted Charis to serve. Other feminist presses and bookstores were opening across the United States, and Bryant wanted Charis to exist as a feminist bookstore, too. It became a priority, then, for Bryant and Borgman to stock their shelves with books by and about women, about feminism, books that touched on LGBTQ experiences, spiritual books and children’s books that were “anti-sexist and anti-racist.”

Over the next 45 years, Charis would go on to become a true feminist institution in Atlanta and across the South, serving not only as a bookstore but also, through the store’s nonprofit arm — Charis Circle, now helmed by executive director E.R. Anderson — as a hallowed meeting ground and “de-facto community center” for folks from marginalized communities, a physical location where they can come together and write, read, have conversations, share ideas and hold space for one another during tough political and cultural times.

“Charis Circle exists to foster sustainable feminist communities,” says Anderson, “to work for social justice, and to encourage the expression of diverse and marginalized voices.” And it does this, much in the way Charis Books has since 1974, through book events, Thursday night programs, community education and grassroots organizing.

As manager and bookseller, Luce Look also continues to ensure that Charis’ shelves are still stocked with multicultural, progressive, inclusive titles — fiction, nonfiction, children’s books, poetry and more — all reflective of the diverse customers who shop there and the real-life issues around love, religion, work and identity that they may be facing.

All this to say, of course, that the decision to leave Little Five Points was a hard one to make — but also a necessary one, Luce Look and Anderson realized, if Charis, now Georgia’s only independent feminist bookstore and one of the few remaining in the country, was going to survive. They determined that the only way to ensure that survival and remain financially sustainable was to sell the Euclid Avenue location.

“We bought this building, and it helped us stay in business for a very long time,” Luce Look says. “But we went into a lot of debt with this building, and the only way to get out of that debt was to sell it, and that meant we had to move.”

To where, they didn’t know.

Says Anderson, “Around 2013 . . . we were feeling pretty low, pretty worried. This is our baby, this is our home. We really want it to survive for the generations after us — we often talk about just being stewards for this space, holding it for the community. So we were just like, ‘How the fuck are we going to do that?’”

Anderson and Luce Look knew they’d never been cash-rich, but they did have a very strong network of friends and community partners. So they embarked on what Anderson called a listening tour, talking to community leaders and stakeholders, asking really tough questions, like, “Is it important to the community for Charis to continue to exist? How would you feel if Charis went away? What can you imagine carrying Charis forward?”

These questions would eventually lead them to Beth Hackett, director of women’s studies at Agnes Scott College, who proposed an idea about Charis being Agnes Scott’s official campus bookstore. Luce Look and Anderson thought it over, drafted a proposal and with Hackett’s help, got it into the hands of the then-president and vice-president of Agnes Scott.

“They were really into it, and we were shocked and excited,” Anderson says. “They really wanted a different bookstore partner. They really wanted a local bookstore partner. They liked the idea that Charis and Agnes Scott had this long, overlapping history. We’ve had so many board members who are Agnes Scott alums, so many people who have worked here who went to Agnes Scott, so much warmth between our two institutions.”

A deal would eventually be finalized between Charis and the college, a new partnership born, Charis’ new address now a beautifully renovated historical home located off the contiguous campus at 184 S. Candler Street, Decatur.

The new space will have some new square footage dedicated to Agnes Scott books and apparel, but the beautifully diverse, feminist book collection that Luce Look carefully curates will remain the same.

“We’re partnering with them,” she says, “so we’re bringing our feminist bookstore, our feminist nonprofit, being our very own selves, but adding a school store component. We’re expanding is how we put it.”

Anderson sees it not only as an opportunity to ensure Charis’ future in Atlanta but also to expand the “big tent” of its feminism and outreach.

“There may be conservative students at Agnes Scott College,” he says, “or parents or grandparents who are concerned about our presence on the campus as a historical feminist institution — because a women’s institution is not the same thing as a feminist institution. And I think one of the things that I really want to model is how respectful and loving that big tent can be. We want to invite you in. I think that spirit of ethical civil engagement is something that young people can benefit from seeing modeled. We want you here, and we want you to be your whole self here.”

Regardless of location, Luce Look’s hope for the store and its customers is the same as it’s been since 1994, and since 1974 when Linda Bryant and Barbara Borgman first opened the doors.

“We always hope that they’re going to see their lives reflected on our shelves. Especially with our kids books, but we also have people come in here who are just like, ‘I’ve never seen books collected in this way.’ Because part of it is what is sitting next to it,” she says, “how [books] are categorized. We want you to see yourself on our shelves.”