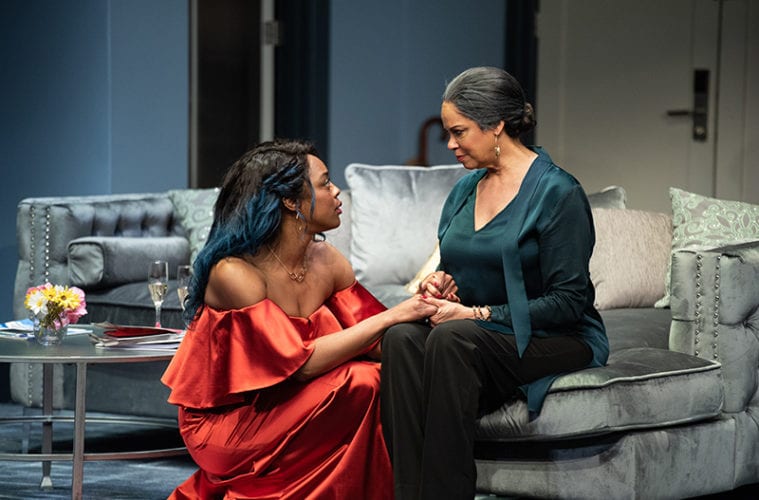 How do you feel when your most well-known work is not your best work? What happens when a new generation challenges the ideals of the one before it? Can you hold sacred that which you sell? Pearl Cleage asks these questions and more in her new comedy Angry, Raucous and Shamelessly Gorgeous, onstage at the Alliance Theatre through April 14. This short and sweet 90-minute play is a departure from Cleage’s historical dramas and doesn’t showcase her signature poetic language, but it still leaves the audience with a lot to chew on.

Lifelong friends Anna (Terry Burrell) and Betty (Marva Hicks) have been living in Amsterdam ever since Anna’s protest performance Naked Wilson thwarted her career in the States. Anna has been able to build a career in Europe playing iconic roles such as Medea and Clytemnestra, but she’s now on the other side of 60, and the phone isn’t ringing so much.

Nearly 30 years after Anna’s controversial performance, Kate (Je Nie Fleming) wants to honor her at the inaugural Angry, Raucous and Shamelessly Gorgeous women’s theater festival in Atlanta. Anna is thrilled until she discovers that a 26-year-old stripper/porn actress named Pete (Ericka Ratcliff) will be performing Naked Wilson. With the women at odds about their visions for the show and a thunderstorm threatening to cancel the festival, they must learn how to navigate their different definitions of empowerment in service of something bigger than their egos.

Artistic director Susan Booth helms this snappy (though at times tedious) world premiere that is very rooted in the now. The ensemble of four really settles into these characters, despite the script’s loose ends. There’s mention of a Ponzi scheme, a mysterious lady in mink, a ghost and an odd ode to “Oh Susanna” that tangles up the story line. Nonetheless, in many ways these women could very well represent all women at different phases of their lives. Kate (Je Nie Fleming) and Betty (Marva Hicks) must bring Anna and Pete together to save the festival. (Photo by Greg Mooney)

Burrell is hilarious as an aging diva, reflecting on the second-wave feminism she helped to usher in, while also facing the frustration of having to prove her relevance. It’s almost heartbreaking to hear her character reflect on tackling lead roles in Tennessee Williams plays and Shakespearean dramas. It seems that somewhere between colorblind casting and color-conscious casting, the American theater lost emphasis on the essence of character. Black women today may never have the opportunity to play those classic roles because, as of late, everyone seems to want the actor to literally be the character.

Betty is also in her 60s, but in Hicks’ performance, she is more settled in herself than Anna is — perhaps because she doesn’t live for the applause. The friendship between these women shows how our friends can be our biggest cheerleaders and also the enablers of our worst habits.

Fleming as Kate, a woman in her early 40s, is high-strung and career-driven. She wants this new festival to be her mark on the world.

Finally, Pete is in her 20s and trying to find herself while also forming her perspective on what it means to be a woman and artist with a background in the adult entertainment industry. She is also not formally educated like the other women, so she is unfamiliar with Langston Hughes and August Wilson, which adds an unexpected examination of class differences to the script. It seems unlikely that Pete would be unaware of Hughes or Wilson considering the awakening happening among black women who embrace ancestral religions and worship at the altar of Shirley Chisholm, but this is theater. Ratcliff certainly holds her own onstage with these seasoned actresses and renders Pete with comedy and sincerity.

Scenic designer Collette Pollard gives the cast a lovely space in which to tackle the hard questions. The detail in Anna and Betty’s luxurious hotel suite is exquisite. From the blue and gold abstract paintings on the walls to the Keurig machine on the table to the sheen on the velvet, tufted sofa and arm chair, it looks like a recreation of a room at the Mandarin Oriental Hotel. Costume designer Kara Harmon also does a nice job of getting the eclectic wardrobe of the aging woman artist right — you can usually spot them in a shoe worth talking about and a dramatic shawl.

At one point, Anna says, “The stories are forever about their blues and not ours,” referring to why she decided to perform iconic male monologues that form Wilson’s plays naked. However, this statement could apply to young people, white people, beautiful people — it seems there are a plethora of stories to tell onstage about anyone but a black woman.

This is where young women have a lot more in common with their bra-burning elders than either group wants to admit in the struggle for visibility.

I’ll admit this is not my favorite of Cleage’s plays, but she deserves applause for giving voice to black women like herself who still have something to say in their twilight years. We can all certainly benefit from their wisdom.