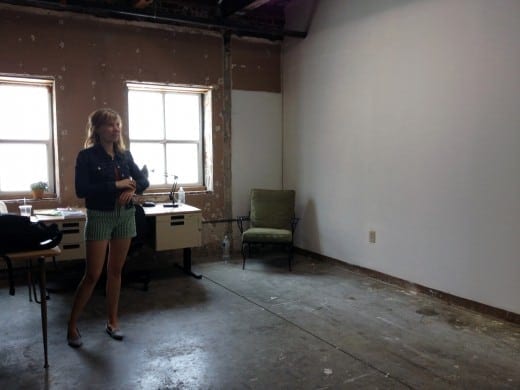 Q&A: Photographer Stephanie Dowda loves places, but loves noplace most of all Every so often, photographer Stephanie Dowda courts the idea of moving away from her hometown of Atlanta. Especially when she remembers discovering, after graduating from Georgia State University in 2006, that no rentable darkrooms existed for emerging artists in the city. Though often tempted by imagining the opportunities that bigger cities might offer, she is compulsively drawn back by envisioning all that Atlanta could be.

Taking it upon herself to create some of the resources the city lacked, Dowda established the Clique Clique collective in 2006, with photographic happenings all around the city, and more recently the Analog Hog, a member-run darkroom at the Goat Farm Arts Center. She recently became creative director at WonderRoot, taking her focus on community engagement to a new level. Dowda’s photography has dealt with themes of memory, nature and abstraction. From her oddly idyllic “Utopophilia” installation at Boom City, which attempted to transfer a faraway place into the gallery setting, to her “Topophilia” series of abstract landscapes, her work reflects a preference for questions over answers and a comfort in the unknowable.

The 30-year-old artist’s work has received increasing recognition. The Oxford American featured her in its July issue, and she won the first competition for the cover picture of Coconut, an online poetry magazine. Dowda was recently accepted into the Studio Artist Program at the Atlanta Contemporary Art Center and now has her first commercial gallery representation, at Get This! Gallery.

Place is unarguably important to her. Not surprisingly, perhaps, Atlanta has been a recurring character in her work for almost a decade. The desert landscapes of Green River, Utah, will be her subject during a residency with Cabin-Time later this year. But her favorite place is actually no place at all, but rather an inexplicable state of being which often appears in “Topophilia,” which means love of place or the sense of place. ArtsATL recently spoke with Dowda in her new studio at the Contemporary.

ArtsATL: Tell us about “Topophilia.”

I don’t know how much I believe this or am invested in this, but I like the idea that there’s this whole other sensory experience you’re constantly having. Maybe your consciousness is blocking it. There’s something else going on, and I don’t know what that is. Maybe that’s aliens or maybe that’s “Topophilia.” I think I’ve always been exploring the relationship between the tangible and intangible.

ArtsATL: Real but not real. Present yet elusive. Tangible yet intangible. Is the wisdom that “Topophilia” implies attainable, or is there a sense of futility in the work?

Dowda: I guess so, because I don’t think there are answers. I like ideas and questions. I really don’t care about answers. I don’t feel like I’m giving up by not having an answer, which is what futile feels like. Maybe that’s sidestepping something, but I’m really comfortable with ambiguity.

I think in that first roll [of film] which I can see in my head now … that I felt like even though it was a complete mistake, there was something else going on. In the letting go of control and in letting the camera be whatever mechanical thing it was, [what happened was] the capturing of light.

Light is an energy. And so when you record it, when it is physically solidified on film, you have something. You have a part of me or you or this wall or the sun that you can’t get anywhere else. So what is that? That gives me chills thinking about it. I don’t know what that is. I don’t know if I want to know what that is. I just want to keep trying to imagine I can figure it out. There are these moments where I feel like my inside self is bigger than my outside self; it’s just slightly bigger and there’s this weird tension. I have this sensation often; I’ve had it since I was a child. I’m not asleep, I’m not awake. And I’m in and outside myself. It’s really weird. And I think that’s actually, now that I think about it, what “Topophilia” is.… That’s my favorite place; it’s not a place or actual thing. Maybe it’s the verge of insanity, I don’t know.

ArtsATL: Tell us about your new studio space.

Dowda: I think that there’s a rigidity that you need to have as an artist.… I have a studio in my house, but I really just wanted to feel like I had a place to go and work. I think when I had more of an office job, I understood that difference between home and work. So [the Contemporary studio allows me] to put pressure on myself to say “you’re gonna be in the studio for X hours a day, a week.” And even if you just sit there and stare at these African violets and realize they need water, or these cobwebs, or listen to how loud this fan is, whatever — you’ve gotta make it a … regimen.

ArtsATL: How would you describe the structure of your practice?

Dowda: Maybe because I’m logical, but [my] idea of … being an artist is that you have to work at it. Making it a real awareness and effort. I thinking having an ACAC studio helps me think that way. It just needs to be my space. Being exposed to the writer’s world [through reading about their practices] has helped me think more about practice and getting down and dirty and really doing this daily.

I’m never not working. My poor friends are like, “Let’s get dinner.” [My response is] you can bring dinner to my studio or maybe we can go swimming. Those are their choices.

To be happy and healthy is such a gift. You don’t have a lot of time. You just don’t. So, what are you going to do? What are you going to do every day? It better be super awesome or trying to be awesome. For me, that’s making giant [papier mâché] mountains. Or going to the woods and taking pictures of eruptions.

I think there is this bigness to life that we just don’t know. We don’t know that now; we don’t know that when we’re sick in the hospital or making our art. But I think it’s there and we feel it. And I think we deny it a lot. But I think it’s an interesting question and a very real thing that we just can’t ever really know. How can you? You’re a five-foot-three person driving around in a car. How can you see that?

I think I have this real strange brain where there’s three levels going on. I can just take something and that idea travels the ocean of my brain and gets to the other side and gets put out. I’m always thinking of something else. I don’t feel distracted, but again it’s a compulsion. I dream about ideas.