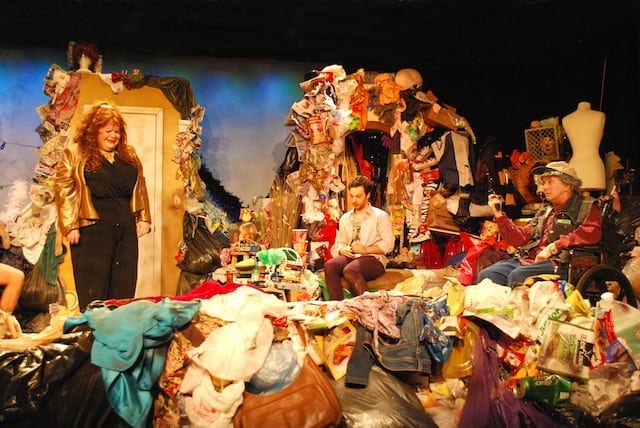 If you can imagine the desperate, deluded characters of “Sunset Boulevard” and “Whatever Happened to Baby Jane?” suddenly thrust into the world of Honey Boo Boo Child, you’ll have some idea of what unfolds in “Trash” by Atlanta playwright Johnny Drago, being performed by the Process Theatre Company at Onstage Atlanta through September 28.

“Trash,” in its world premiere, tells the story of Jinx Malibu, played in drag by actor DeWayne Morgan, a former D-list actress in a series of exploitation films called (what else?) “Rocketpussy” and a celebrity hawker of shady diet pills. She’s now older, overweight and living somewhere in Appalachia in an isolated trailer filled to the brim with trash, much of it detritus from her former career.

Living with her is her tough-as-nails, wheelchair-bound mother (a hilariously no-nonsense Jo Howarth) and her two troubled children (Amanda Cucher and Geoff “Googie” Uterhardt). Into this fraught but unchanging mess arrives hope and threat in the form of a celebrity-gossip blogger from Hollywood (Daniel Pino), wanting to capture a few LOL-worthy pictures of the former cult heroine for his website. He doesn’t exactly represent “opportunity come knocking,” but for Jinx and her family he might as well. They refer to him as “Mr. Hollywood” and treat him like an important movie producer, pitching their big ideas for Jinx’s comeback.

The playwright and actors dive head first into the play’s fun, quirky mix of camp and Southern Gothic. Atlanta playwright Topher Payne, here acting as director, is great at bringing Drago’s zingers, weird situations and characters to the stage. Fans of the drag comedies of Charles Busch and John Waters will be well served.

Drago provides plenty of diva entrances, over-the-top monologues and one-liners for Morgan as Jinx, all of which the actor obligingly gobbles up like so much Slimtastic. Especially well done is the second-act ensemble creation of a “Rocketpussy” comeback film for the benefit of Mr. Hollywood. It’s a sort of icky underbelly view of American culture: part family ritual, part exploitation flick, part swelling patriotic spectacle.

Jinx’s home is meant to feel isolated, and it does, though the isolation can end up creating a somewhat static atmosphere, where more and faster motion might have better suited the tone of the play. Mr. Hollywood seems as if he should carry a more genuine sense of promise or threat: he contains bits of both, but not enough of either to activate and energize the storyline the way he should.

At the end of the second act, “Trash” makes a sharp turn away from camp comedy toward its darker Southern Gothic elements with the revelation of a buried secret. Things end as badly for Jinx as they did for Norma Desmond in “Sunset Boulevard” and for Baby Jane.

But perhaps they didn’t need to. In some of its best and funniest moments, “Trash” implicates us in a curious cultural development: with the advent of the Internet and reality TV, characters like Jinx, Norma and Baby Jane are indeed finally ready for their close-ups. A drugged-out, outrageously deluded, over-the-top, aging former D-list sexpot desperately grasping for a tiny bit of fame needn’t waste another moment wallowing in seclusion or pining away for better days. Jinx is just the type of star Americans now long for.