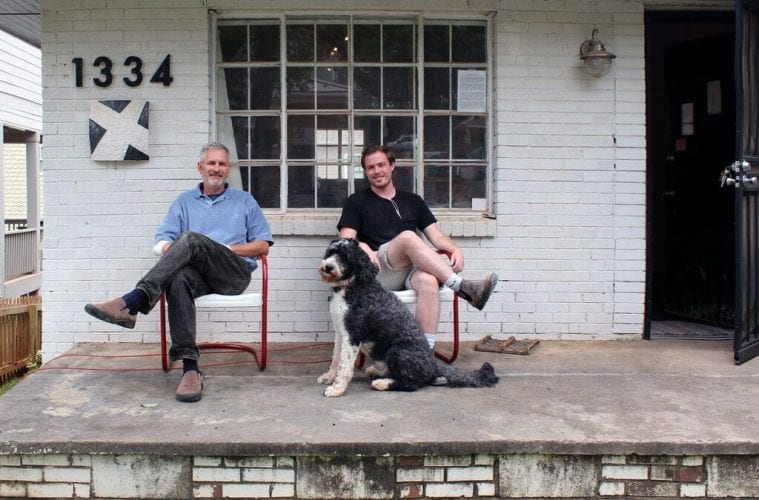 A studio conversation with Gregor Turk

Images and interview by Anna Nelson-Daniel.

Gregor Turk explores material in relation to designated sites. His studio is located in the Blandtown — often mistakenly referred to as the Westside — of Atlanta. Inside the house resides Turk’s archive of over 28 years of visual works. Eighteen topographical ceramic sculptures hang facing the stairwell descending into the basement ceramic workrooms. Striking hues of blues, greens and yellows radiate in a grid-like display in contrast to the interior white walls. We tour through the space in conversation about the evolution of the neighborhood as a framework for his practice.

Gregor Turk: I’ve always cited this studio as “The Heart of Blandtown.” Talking about audience, the first consideration is whether your audience is knowledgeable [about the subject matter]. People always ask why I call it Blandtown . . . and that’s because it is Blandtown. You gotta love the irony of the name that some of Atlanta’s best restaurants are in Blandtown.

Speaking to the history of it, in the 1950s and ’60s the city changed the zoning and it went industrial. They made the caveat that the people living here could not make improvements to the property, so everything went into decline. Rather than being gentrified it was industrialized — bringing into consideration race and class. I came in during that period of decline. Interestingly, the person who originally built the building is still living and stopped in about two months ago. It’s fascinating to hear his stories. For example, the reason the front of the house is brick (and the sides concrete) is a result of the train traveling through the Chattahoochee Brick Co. yard not too far from here. They would drop the chipped bricks right here and he would haul them down to have enough to do the front of the house. 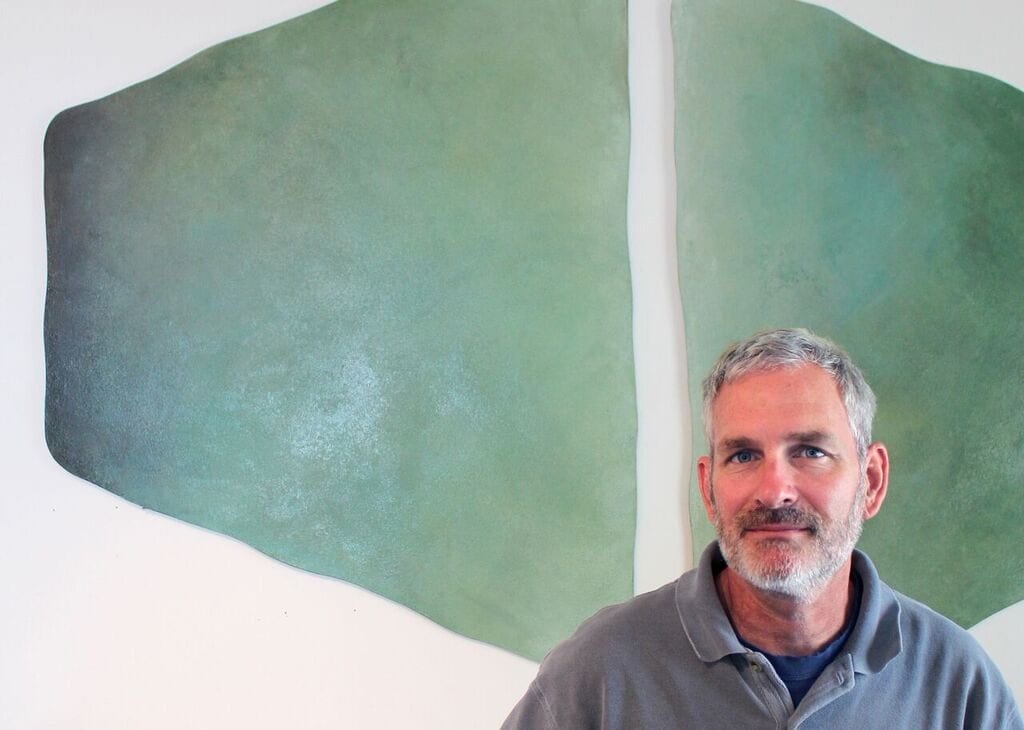 ArtsATL: Place is an essential motif in your work. How has living in Atlanta shaped your visual arts practice?

Turk: As a lifelong resident, growing up here and gaining insight through the years into Atlanta’s unique qualities and foibles has served as an ongoing resource for my work — exploring a specific place: home. As a relatively young city with a bit of an insecurity complex, Atlanta’s unusual geographic setting (atop a ridge, the Eastern Continental divide, no less), its founding and orientation as a transit center, and overlay of culture, infrastructure and life make the city a complex, intriguing and, at times, disappointing place. Atlanta’s arts community comprised of an engaging mix of artists, audiences, administrators, gallerists, curators, critics, educators, cultural institutions, collectors, contributors and corporate sponsors forms a dynamic ecosystem that is supportive and relatively diverse.

ArtsATL: Your site-specific work has shown in public spaces throughout Georgia — from the BeltLine to Ponce City Market to the Hartsfield-Jackson International Airport. Do you consider your work in relation to the ‘public’ as a space itself or more so the ‘public’ as an audience?

Turk: Consideration starts with the place — gaining insight into its history, meaning and use. But knowing who the audience is and the potential mindset of that audience is paramount. In the end I strive to integrate the two. In cases like the BeltLine, the corridor is as much about the population using it as the actual physicality and narrative of that corridor.

ArtsATL: What might you say most influences your concepts?

Turk: I am a responder to place. Maps, signage, plaques and other markers that serve as indicators of an institutional or individual agenda as a means to interpret a given landscape (and its use or former use) have long fascinated me and continue to be the major impetus behind my work. Atlases have always been a great resource for inspiration.

Artists whose work has influenced my aesthetics: James Turrell, for one. His work about experience and the homogeneous field, all light-based installations. The idea that we as humans can’t deal with an undefined space — that your eye has to make divisions. Martin Puryear for his use of materials and how he defines volume in space. Ed Ruscha for his use of signs and language play. There are plenty of others, too.

ArtsATL: How important is it for you to have a hand in the production of your own art objects?

Turk: My thoughts on that have changed in the years since 2012 when I had my exhibition at MOCA GA. Working with a paid assistant is quite different than the help of an intern. I’ve had the good fortune to have some exceptionally talented assistants. Assistants’ responsibilities range from the rudimentary preparation of materials to a much more nuanced understanding of my aesthetic approach and fabrication process. Having assistance allows for greater complexity on a project while also allowing me to focus on developing new projects. Much of my work is labor-intensive, and having assistance allows work to get done at a decent pace. 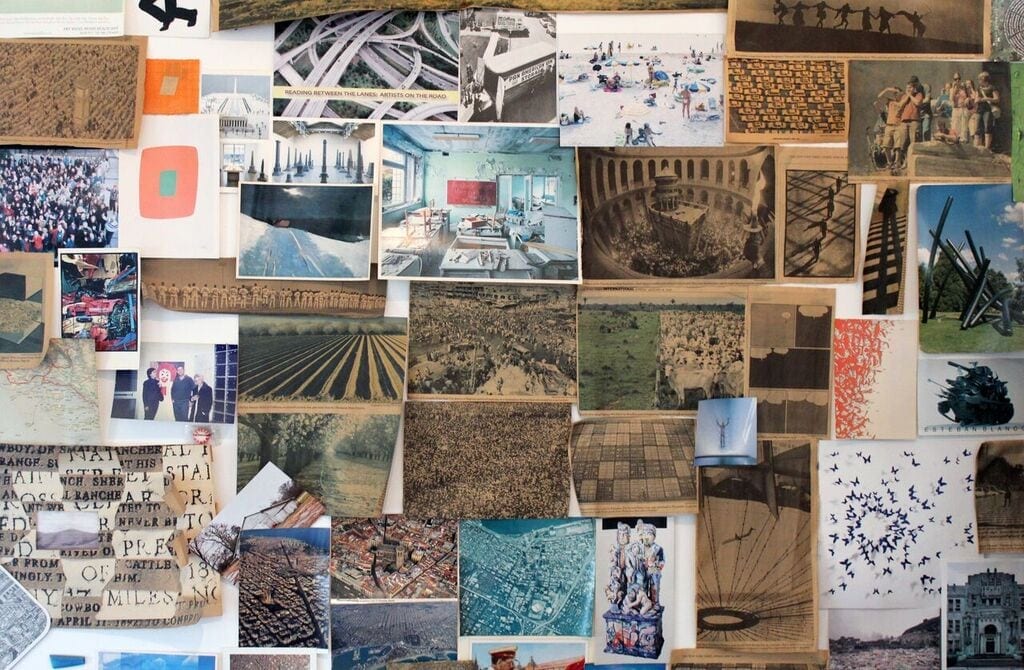 ArtsATL: Material is significant in your approach to object-making. Why rubber?

To me the most important thing is about place, placemaking and marking place — an exploration of those things. When I did the MOCA GA show, I set up the parameter that I couldn’t work in clay. I was working in faux fur, in all kinds of things, then it just dawned on me to use the inner tube. Now it’s been about five years that I’ve been working in rubber. I really love these [rubber sculptures]. They’re playful, and they’re still about topography and contour lines.

ArtsATL: Your works are often displayed in multiples. Is this important for the meaning of the work? 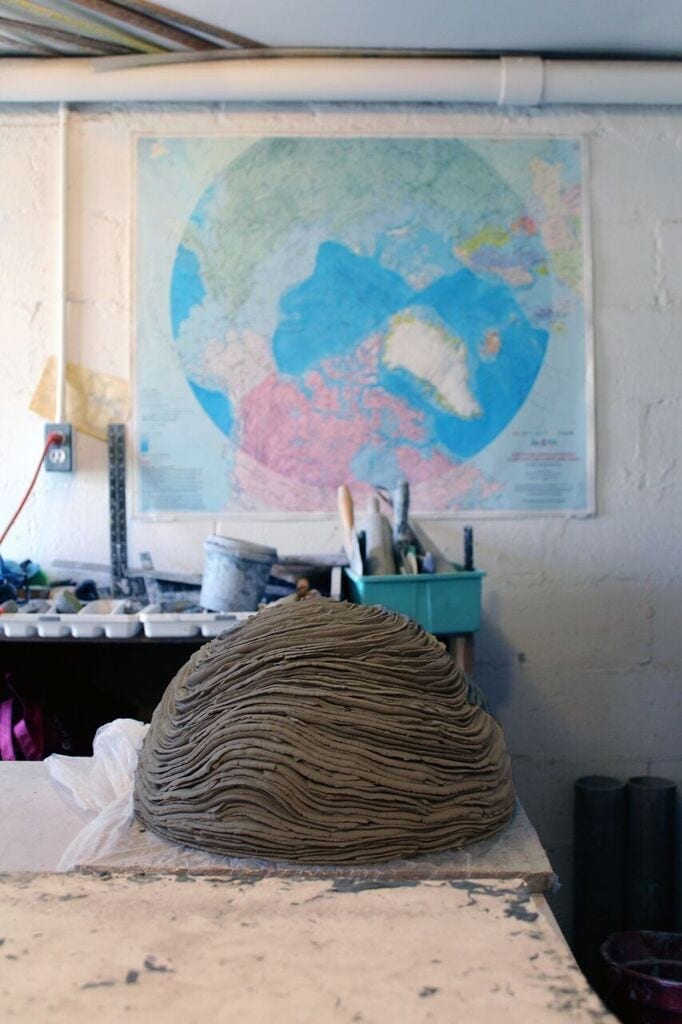 Turk: Some of the multiples are often square or trapezoid, which conceptually acknowledges the Cartesian grid of mapping. Multiples allow for the opportunity to push certain ideas within a series. Paradoxically, I find setting parameters to a series as a fulfilling and challenging way of discovery — finding freedom by pushing a prescribed framework beyond its limits. In ceramics, working in multiples is a bit of a necessity in terms of having to fit work into a kiln.

ArtsATL: How did you begin your career as a working artist?

Turk: I was a Peace Corps volunteer in Liberia and was working with clay there. I was building cook stoves. During that time, I realized I really did want to go on and pursue a career [in it]. So I came back, got my portfolio together and applied to schools. Getting the discipline of one material is so critical. Even with the way you treat rubber. You have a vocabulary to deal with it.

ArtsATL: What are you working on currently?

Turk: The installation 35th Parallel Border Security will be presented at The Hambidge Center in conjunction with the celebration of the total eclipse on August 21. The work will remain ongoing for the next three years.

This project demarcates the Georgia–North Carolina border in “the middle of the woods” where only hikers will have a somewhat absurd encounter with it. As an artist with an ongoing interest in borders and spatial delineation, this opportunity to create a work of art that manifests the invisibility of an actual political border was conceived in part as a response to the current political focus on border issues and immigration policies. Hikers’ images will be reflected in the mirrors as they approach the mirrored border, calling into question who is to be protected/feared/detained at the border.