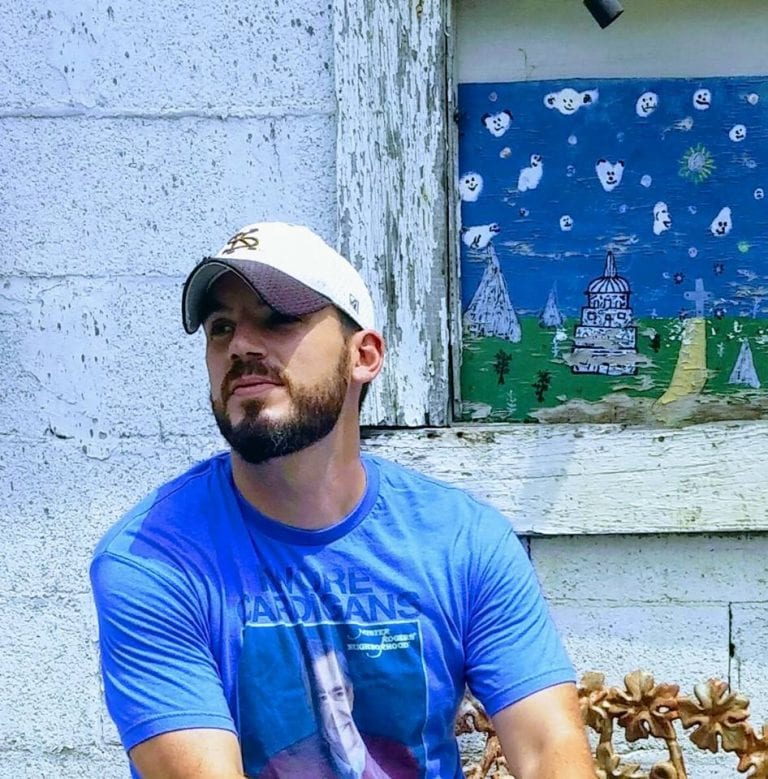 A conversation with Christopher Martin about the journey of writing

Writing is a winding journey with twists and turns, ups and downs, periods of creativity and blockage. But most of all, it is personal; it’s an individual act that is different for all writers. Chris Martin, a newly published author and English teacher from Lawrenceville, knows this all too well.

The month of June brought Martin’s first book, This Gladdening Light: An Ecology of Fatherhood and Faith (Mercer University Press, 172 pp.), but even before then, he wandered his way to the page until he was really ready to write. “It’s just always been there,” Martin said of his love for writing. “I was writing as a kid, imitating Chronicles of Narnia and things like that. I let my love for it go by the wayside for a while, in middle school all the way up through early college.”

Many things kept Martin away from the pen those years: pressure to fit in and be less creative, family dysfunction, not truly knowing who he was. Though these challenges steered him away from his craft initially, he admits they led him to the right place, to the now. “I’m just grateful for those turning points: discovering encouragement through good teachers, hiking a long stretch of the Appalachian Trail, reading Leaves of Grass, finding a sense of belonging with my wife and kids,” he said.

Another one of those turning points could be considered going back to school after finishing college to refine and hone his writing, to enable him to be the writer he is today. Martin attended Kennesaw State University’s Master of Arts in Professional Writing (MAPW) graduate program, of which he graduated from in 2013.

When reflecting upon his creative process, Martin was candid to note that his is nothing special or fancy. It meets his needs and, most importantly, it fits his life. “My writing process is kind of boring,” he said. “I just write in the margins, when I can. A couple years ago, that meant when my kids were napping. Now it means I write alongside my students. I teach freshman composition, so any writing I assign my students, I write as well.”

The writing of his book was similar to this creative nibbling here and there: when he could fit it in. He started writing what ultimately became his memoir nearly eight years ago, before he even considered turning old writings into book form.

His book is about fatherhood, about nature, about life, about inner mental and emotional rumblings, all gathered in one body of work together. Landing a publishing deal with Mercer University Press came as a result of submitting his manuscript for a creative nonfiction award, an award he won, two years ago. “All the pieces in the book work together to make a hodgepodge memoir, but it’s essentially an essay collection,” he said. “I wrote most of it never really thinking of the whole. The whole just asserted itself from the fragments, I guess.”

Inspiration for Martin varies. His children inspire him. But so does music, the work of other writers, long reflective walks and visual art. Martin also sees injustice as a sort of fuel for the writing and English teaching he does at Kennesaw State, especially in terms of his anger and worry of all that continually unfolds. “I might not call that ‘inspiration,’ probably more catalyst than inspiration, but it’s always there,” he said. “I’m thinking a lot about Philando Castile now, for example.”

Martin has published three poetry chapbooks. As he looks to the future beyond his memoir debut, he knows a full-length poetry collection, At the She-Wolf, is next. It is, in a way, like getting back to his roots, like going back to page one and beginning again. “Being a writer is just how I struggle with, try to make sense of and wonder what this all means,” he said. “To me, it’s just an abiding sense of empathy. Anne Lamott puts it in a way that’s stayed with me: ‘To be a good writer, you not only have to write a great deal but you have to care. You do not have to have a complicated moral philosophy. But a writer always tries, I think, to be a part of the solution, to understand a little about life and to pass this on.’”