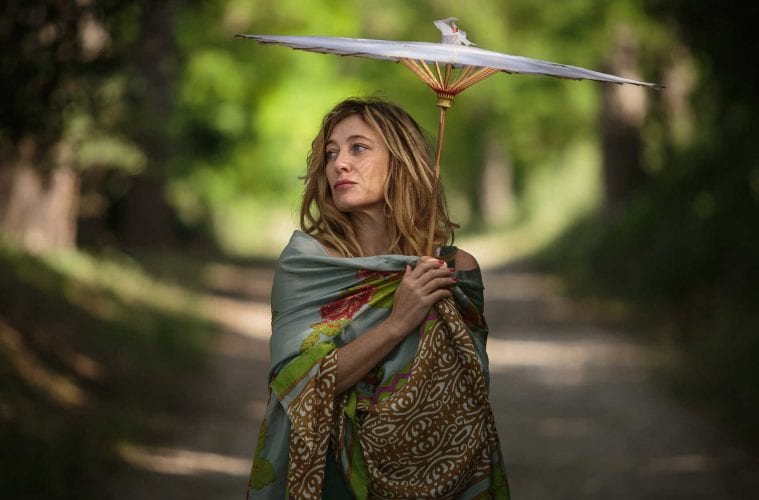 Review: Spurred by a stunning performance, “Like Crazy” is a madly beautiful bouquet

Imagine that instead of losing the family mansion Belle Reve, A Streetcar Named Desire’s Blanche DuBois donated it to the state of Mississippi as a mental health facility. And, after her sweaty New Orleans misadventures with Stanley Kowalski, she was returned there by those kindly white-coated strangers. Now, transplant that idea to Italy, change the names, and you’ll have the giddy premise of Like Crazy.

Instead of Blanche, our bipolar belle is Beatrice (Valeria Bruni Tedeschi). The actor starred in co-writer/director Paolo Virzì’s interesting 2013 drama Human Capital, and they make a great team. While Capital was an ensemble acting exercise, Like Crazy sometimes feels like a one-woman show, thanks to Bruni Tedeschi’s no-hold-barred performance. The movie is a sort of directorial, dysfunctional love letter to its star, and her live-wire performance makes you overlook the script’s frequent implausibilities.

Beatrice is the self-anointed grand dame of her family’s former home. She strolls the grounds beneath a Chinese umbrella, wrapped in silk, and she’s always trying to sneak away into town, despite that restraining order one of her doctors keeps mentioning.

She has George Clooney and Armani on speed dial, and she regales the other residents with stories of attending G7 summits and dining with Bill Clinton (“Hillary’s a bitch, but he’s a doll”). Still, she’s a patient, not the hostess. It’s a good thing that there’s a movie screen between us and Beatrice. She’s a hoot to watch, yet she’d likely be hell to endure in person.

If her fellow patients represent a captive audience, Beatrice narrows her focus to a walking-wounded newcomer, Donatella (Micaela Ramazzotti). She arrives bandaged, bruised and trailing occasional flashbacks that hint at the Terrible Thing She Did that got her committed to this facility. At first, Donatella mistakes Beatrice for one of the staff doctors, and Beatrice doesn’t disabuse her. Later, though, Beatrice takes the young woman under her gaudy wing — the emotionally damaged yin to her own irrepressible yang. (Ramazzotti is fine, but the character is a drag.)

Much of the movie’s pleasure derives from watching “normal” people knocked askew by Beatrice’s shrapnel-flinging life force. There are a lot of those scenes in the movie’s second half, when Beatrice and Donatella take a runner for a kind of Italian, Thelma & Louise-lite.

Donatella’s goal is to find her young son, Elia. Beatrice’s goal is to help her. But she keeps taking detours to see old friends and reconnect with a criminal ex-lover. En route, she tries to get away with whatever she can manage. That includes variations on the dine-and-dash at elegant restaurants. Blithely racist, Beatrice tells one waiter that they can’t pay for dinner, because “some ill-intentioned folks, probably Romanians or Africans, have stolen our purses.”

Psychologically, the movie can stray uncomfortably close to that old 1960s movie trope: Ah, crazy people — they’re really the sane ones! But while it’s easy to bask in Beatrice’s cockeyed mania, the movie does remind us of the damage both its women have inflicted. Recounting all the lies her daughter has told and the family money she’s squandered, Beatrice’s mother bluntly says, “I have no pity left for her — she should kill herself.” And when Donatella manages to locate Elia, you’re likely to side with the boy’s kind foster parents against his fragile, damaged mom.

So yeah, the movie — except for Bruni Tedeschi’s core performance — is uneven. It’s easy to forgive the script’s shortcuts, though, in the film’s final moments. You realize that, all along, what you’ve been watching is a love story. Because that’s what true friendship really is.