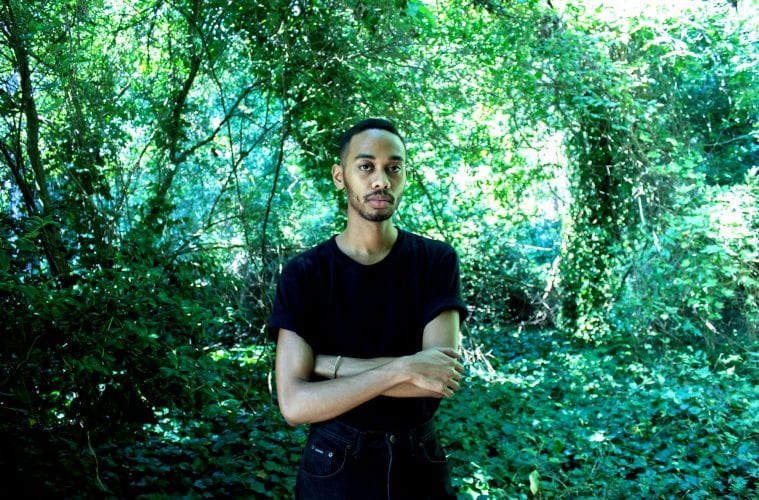 A studio conversation with Davion Alston

Davion Alston has been on a hiatus from creating artwork for the calendar year. Since graduating with a degree in studio art from Georgia State University in 2016, Alston has assisted other artists such as Radcliffe Bailey with installation for a solo exhibition and Masud Olufani with the Working Artist Project at MOCA GA. His photographs have shown in Queering Space at Yale University, in Do You See Me? at Winston-Salem University and most recently in re:Fresh at Swan Coach House, curated by Atlanta-based artist Jordan Stubbs. We start in conversation inside his home studio to discuss his practice thus far and ongoing themes throughout his work.

ArtsATL: What would you say most drives your arts practice?

Davion Alston: I want to move with a purpose, toward a purpose. I want to make sure that I create with a purpose, that everything I do is coming from me. Through my work, I think about the identity of things. It might not be very upfront, but much revolves around my adoption, things I remember about growing up or power dynamics. I would always explain my observations to my dad who would tell me, “No matter where you come from, you’re going to be perceived as this skin tone, you’re going to be perceived and put into this box.” I always carried that with me. When I think about my adoption, I think about this maneuvering or exploration that I have to do within myself and also [have] to project outward.

I like to work in white wall [institutional] spaces because my voice there needs to be heard as a different perspective of what it means to be or to receive blackness in this way.

ArtsATL: How do your technique and methodology reinforce this [concept of blackness]?

Alston: I mostly shoot objects. I find this uniform alignment with how I perceive myself and my identity constantly being negotiated with objects. These objects are constantly getting tossed around, picked up, thrown around, can be personified to relate to the black body. That’s why I see a dichotomy and a conflation between objecthood and subjecthood. . . . The ongoing theme remains to be how the black body can be negotiated within these spaces.

[Looking at] my portfolio, it jumps from current to historical references. Current being the Food for Thought series, which you saw . . . the skittles, the sandwich . . . those relate to [public narratives of] black teens that were killed by police for whatever object they were carrying [that was] mistaken for a gun.

Photography as a medium has a violent history of misrepresenting black bodies, for example in Louis Agassiz’s “Slave Daguerreotypes.” These images were then repurposed by Carrie Mae Weems in her print series From Here I Saw What Happened and I Cried (1995–1996). ArtsATL: We first met when your Paper Bag Party series was up at Hathaway Gallery last year (Fall 2016). How does this work speak to the ways in which black bodies are negotiated within gallery spaces?

Alston: [Speaking to the cultural reference] the brown paper bag test was done in the ’60s to ’80s as a test for black Greek life. A brown bag was placed on a door at a party; if you were darker than this paper bag you were seen as the bottom of the totem pole, and if you were lighter than the paper bag you were allowed into the party and higher on the totem pole. So it definitely plays a role in the power dynamic, which separates within blackness.

[During the exhibit] people were just interested in the titling of brown bags, i.e. this is a Little Brown Bag from Bloomingdales. In a way, it almost became a performance [sourcing the bags in different department stores]. Some people would assume I want the bags for shoplifting, and I’m like, “NO.”

There is [also] this intersection of socioeconomics that can be easily talked about. David Hammons used the brown bag [in Bag Lady in Flight, 1970s]. Back then the brown bag was this thing that was seen as less than, i.e. if you carry your lunch in a brown bag. Now the brown bag is a beacon for megacorporations [to signify high class/status].

ArtsATL: More recently, you had a piece exhibited in the group exhibition re:Fresh at Swan Coach House. Will you say more about your process and intent for this imagery?

Alston: The photo of me was taken in Aspen [while on residency]. Obviously, it was very personal. That’s fine because I think every artist has a nude period. I was with a group of artists on a day trip to this town. We went to this place called Independence Pass, which is one of the highest heights in Colorado. We only had twenty minutes where I could break away from this group of artists to go to this area where no one was and set up my tripod.

What I wanted to bring forth with that piece was the fact that it was a screenshot repurposed as a print . . . then it was next to Kim Kardashian. That’s my interest in pop culture. That’s my interest in a family that is so intrigued with blackness itself – from the makeup kits to the implants to all the lip work, all this work to look like a certain kind of mold of blackness – and the steps they will go to for that. So I did the same pose while in this public field area. While also screenshot-ing it over and over. I made that work as a happy accident, through a conversation with a friend.

Alston: In my opinion, who brings in the most conversation? Who is the face of that family? That’s Kim. Kim is the one with [the] most daring background when it comes to the photos she does or the history and the way she plays that. She also has the most iconic photos to reference, talking about media today [and how it resonates]. Like in the image inspired by Grace Jones, she is the one to take on those roles of iconography. It’s a quick reference that has a lot of depth when you actually think about her.

More critically, they are smart, and they know what they’re doing. Also, they are on a fine line of oblivious and aware of the steps that they’re taking within this identity. How far are they willing to go to make this family – and more so the mother – to make her like the modern-day Marilyn Monroe? Highlighting recent events, they don’t know how to have conversations about race. They are so under the spotlight that they have to be aware, they have to be calculated. In the sense of their appropriation, yes, they very much appropriate. ArtsATL: Do you create each series with an explicit message for the viewer or intend to leave room for varied interpretations?

Alston: I shoot repetitively in a serial, typological way to get the point across. [That approach emphasizes] why it is important. For example, with my Food for Thought series, as repetitive as black death is it’s still not getting the point across. That’s also what makes it hard to contend with in continuing this body of work (that people want to see more of). It is based off a compiling list [of accounts of black death].

I’m not trying to be [radical] as in shooting funeral memorials and open caskets. I definitely have my qualms about Dana Schutz and the Open Casket (2016) painting. I’m not trying to do something in that manner and make something off of it. My aim is to make a body of work that gets the point across without it coming from a place that is harmful – although there is an intention to note that it is coming from somewhere harmful. There is this obsession with black death in white-walled spaces that does not help blackness itself.

ArtsATL: When the Whitney Biennial opened to the public in 2017, a viral discourse erupted within the arts community that rippled into a more widespread conversation. The painting Open Casket (2016) by artist Dana Schutz displayed distorted images of Emmett Till, resulting in public protest both within and outside the museum space.

Alston: At the time, everything seemed to happen all at once. Not long after [Carolyn Bryant Donham] admitted to false claims against Emmett Till, the Open Casket (2016) painting was exhibited at the Whitney Biennial. When I first learned of this piece, my initial question was, why is this work present?

What good was it for her to be there? What I hear most often is the response that [now] the conversation is going. [But] this conversation has been ongoing. All people of color know this conversation is going. It’s been going. It should not have taken the admittance of a white woman painting black death for it to be a conversation in the first place. There’s a history to it. There’s a history to the black body being the subject of white gaze. [Furthermore] I had to negotiate this [censorship of black death] within my work. Simply because of my skin color, I am a target. That work proves it; the history of that work proves it. That spot took light away from every artist that was in the Biennale, away from someone else who is not Dana Schutz. It’s powerful. That’s why I’m so passionate about photography, the representation of photography and who actually lays down the narratives for blackness in photography.