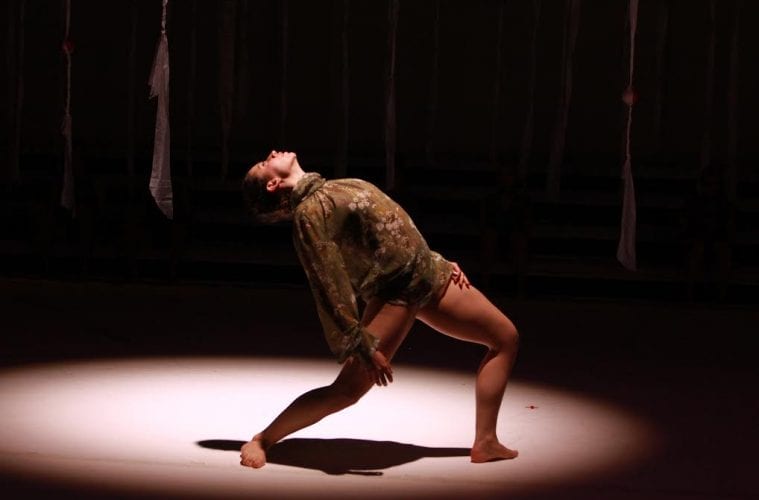 Review: Staibdance’s powerful “wishdust” one of the city’s best works of the year

The pomegranate is a bit like Staibdance’s works — fanciful worlds with interiors packed with organic matter that’s raw, pithy, grainy and intensely flavored.

These leathery-skinned, softball-sized berries symbolize prosperity in Armenian traditions, a personal heritage that informs much of choreographer George Staib’s work. To taste the pomegranate’s fruity flesh is to know the satisfaction of achieving one’s desire, be it individual aspiration or societal obligation.

The pinkish-red globes were pervasive elements of Staibdance’s immersive dance work, w i s h d u s t. They appeared suspended in a dream-like forest, a place for people to reflect on their lives — past choices, missed opportunities and paths not taken.

To flesh out such ideas through dance is easier said than done, and Staibdance handily grasped what it reached for in an enthralling evening-length program composed with remarkable depth, cohesiveness, originality and acute musicality. The world premiere run of w i s h d u s t took place last weekend in the Schwartz Center for Performing Arts’ Dance Studio at Emory University.

w i s h d u s t is arguably the most compelling work Staibdance has produced in its 10-year history. The piece’s vocabulary created a complex and multifaceted world. Combined with Leslie Taylor’s set design and music performed live by Ben Coleman, Kendall Simpson and the Vega String Quartet — with original compositions by Coleman, Simpson and Richard Prior — the abstract work produced powerful cumulative effects capable of going deep into the psyche.

In a space lit in rose and periwinkle blue, two or three dozen strips of thin white taffeta hung from the theater’s upper grid in seemingly random pattern, a virtual forest. A pomegranate was knotted into many of the white streamers, and their edges trailed two to three feet above the floor. Dancers occupied white risers behind the virtual forest, standing or sitting in casual, dream-like repose. Some crept down to the floor, wary, with rigid, angular shapes that contrasted the formal grace of one of J.S. Bach’s Goldberg variations and the delicacy of their forest green chiffon floral print blouses. One dancer’s touch with her forehead would send another dancer into a sudden, clunky roll across the floor. Bodies often maintained a blunt rigidity, even as their motions were fleet and restless, like half-formed thoughts churning through the mind at night.

Often terse and abrupt, they walked heel-to-toe or scuttled along the floor with jerky circularity, limbs often held at crisp angles.

Dancers gazed at the hanging fruits then shaped their hands as if holding invisible spheres close to one side of their torsos, favoring that side of the body, which distorted their movement slightly off-center. 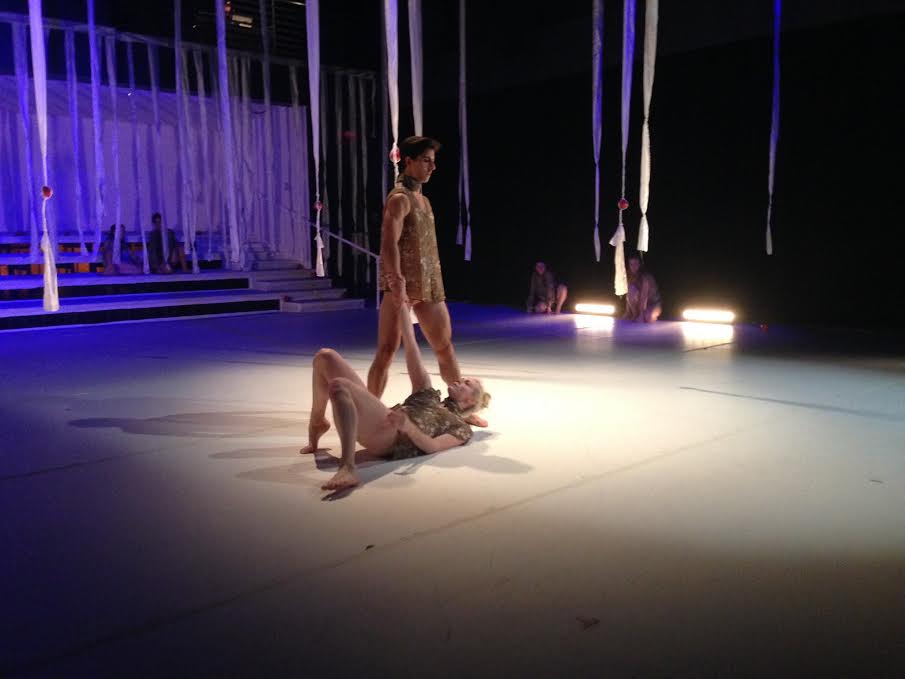 Small, tight gestures swiped back and forth in front of torso and head. They teetered on one leg and pitched into turns then spun back on themselves, whipping their legs across their bodies.

As a violinist played a long, shrill note, dancers held their hands close to their ears, as if perhaps trying to block an inner voice. At one point, they clustered on the rear risers, bodies not touching but catching the techno-pop music’s irregular beats. Like small convulsions, their muted impulses stopped before they could carry the body into space.

Nathan Griswold and James La Russa gazed at pomegranates as if they were objects of desire. Emma Lalor, like an enraged housewife, silently vented her frustration at another hanging fruit. Others carried her off stage, but she went down fighting.

La Russa, seated in one corner, rolled one pomegranate after another across the floor to Lalor. It seemed as if he was giving all his wishes to Lalor, who hoarded them into a pile.

Kathleen Wessel appeared alone, downstage center, moving as if pulled in different directions. She rolled her shoulder with a power that seemed to yank her from behind, like a nagging, “What if?”

Soon after, Amelia Reiser appeared upstage. To an ascending melody, plaintive and mournful, she stretched her arms high to the side like wings, then dropped down in a wide stance, clasping toward the ground. With one of the evening’s most beautiful and expansive movements, she raised both arms and one leg high and wide the side, like a bird soaring above the fray.

A bell rang, signaling the start of a series of one-on-one matches, where pairs of dancers dropped to the floor to sit side by side, tumbled over one another with limbs interlacing, perhaps playing out conflicts between desire and duty. They brought their hands to their lower backs as if weary or in pain — perhaps too tired to fight anymore. But Lalor never gave up, and her final charges toward the audience brought the work’s elements together in one of the evening’s most potent moments.

w i s h d u s t was one of the most powerful and thoughtfully conceived dance works presented in Atlanta this year. It’s the kind of piece worth breaking apart and studying from every angle. Though its three-day run has come and gone, the thought of seeing Staib’s work again lingers like an unfulfilled wish suspended in the air.