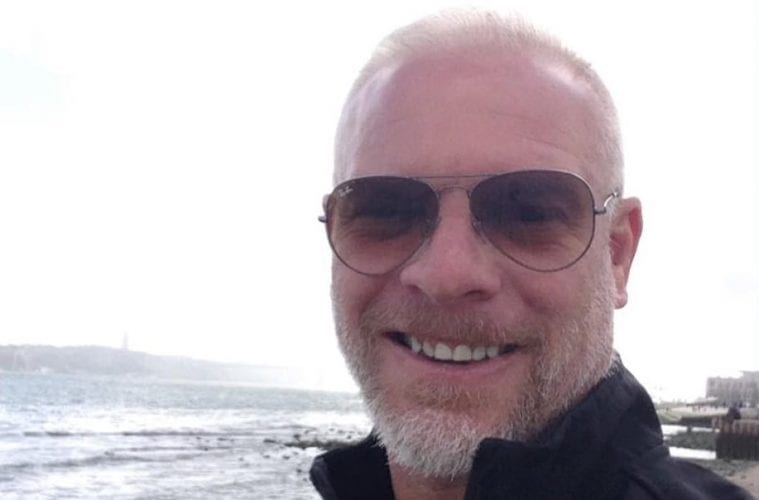 Michael Lucker takes a swig from his bottled water as he scrutinizes the nutrition label on the half-eaten bag of  potato chips. It is early afternoon, and he is seated in a comfy arm chair at the Lodge on Roswell Road. With the exception of a lone figure seated at the large common table by the windows typing on a laptop, he has the entire place to himself.

“It’s usually a little more crowded than this,” Lucker says. “I love coming here to write because I can always find a comfortable space to settle down to work.”

He’s been working a lot lately. Lucker parlayed a job as Steven Spielberg’s assistant into a career as a Hollywood screenwriter, with a score of features to his credit that include Eddie Murphy’s Vampire in Brooklyn and, most recently, screenplays for Disney. Lucker has also founded the Screenwriter School, where he teaches aspiring writers. A new session will be held at Emory University beginning November 4. He has authored a newly released book on the craft of screenwriting, CRASH! BOOM! BANG! How to Write Action Movies. And he teaches screenwriting and film production at the University of North Georgia. (Disclosure: Gabriel Wardell is teaching a film appreciation course at North Georgia this semester).

He maintains an active writing career. His screenplay The Rescue is in development at Olé Entertainment, a short film he coproduced called A Reckoning is in post-production and he plans to travel to Uganda for background research to write a screen adaptation of Sowing the Mustard Seed, a biopic of Yoweri Kaguta Museveni, the man who led the rebellion to liberate his country from the tyranny of Idi Amin.

Lucker is an Atlanta native who fell in love with the movies at a screening of Raiders of the Lost Ark as a kid. Spielberg’s homage to classic Hollywood serials about a snake-phobic, whip-wielding, globe-trotting anthropologist melted his brain. Lucker recalls this moment as his life’s inciting incident. “I came out of the theater at Perimeter Mall that night wondering ‘How do I do that?’” he says.

Keen to learn, first-hand, how the industry works, Lucker sent out 100 resumes to everyone he wanted to work for after college. He got one interview from his efforts, with a twist filled with irony: it was with Amblin Entertainment, Steven Spielberg’s company.

A week later he was offered a job as Spielberg’s assistant. “My first day, there I was with Steven Spielberg, deep in post-production for Indiana Jones and the Last Crusade,” Lucker says.

He got a crash course in the development, production and direction of a plethora of cinematic projects, working with Speilberg on projects that included Arachnophobia, Joe vs. The Volcano, Always, Back To The Future II and III and Jurassic Park. But Lucker knew that he needed to branch out on his own if he ever intended to pursue his dream of bring a screenwriter. Rewarding as it was to work in the presence of modern cinema’s undisputed maestro, it demanded his full attention and left no room for his own aspiring writing career.

In short, he quit because he didn’t have time to write. Even with his first option, it took a while before he finally thought of himself as a professional screenwriter. “I don’t think I accepted I was a screenwriter until I saw my name on the screen at the premiere of Vampire in Brooklyn with Eddie Murphy,” he says.

From there, Lucker was hired to write a number of projects, including animated features Home On the Range and Spirit: Stallion of the Cimarron, which was nominated for an Academy Award in 2002 as best animated feature. He also worked on the sequels to Mulan, Lilo & Stitch, Emperor’s New Groove and 101 Dalmatians. On the tonal shift from Wes Craven to Walt Disney, Lucker shifts into instructor mode. “Stories are stories,” he says. “They all have the same basic tenets: a flawed hero overcoming insurmountable odds in obsessive pursuit of a worthwhile goal that forces them to grow. If those things aren’t happening, no one’s going to care about them, regardless of the genre.”

It is easy to see why he has become a staple on film festival and industry panels. Since returning home to Atlanta from Los Angeles about a decade ago, Lucker has emerged as the one of the region’s foremost authorities on the art, craft and trade of screenwriting. “I originally came home for the green trees, blue skies and southern hospitality I grew up with,” Lucker says. “After years on the Hollywood roller coaster, I found it rewarding to help others tell their tales and pursue their dreams.”

His decision to move home couldn’t have come at a better time. The Georgia Entertainment Industry Investment Act in 2008 sparked the big bang of Georgia film production. Along with the explosion of moviemaking came resonant waves of interest in moviemaking. “People just began asking me to teach them what I had learned in Hollywood,” Lucker says.

Recognizing a boom in demand for real-world screenwriting instruction in Atlanta, he founded his school, a course of workshops where he teaches the fundamentals of the craft. The workshops focus on the process of how to develop an idea into a fully realized, three-hole-punched, double-brad-bound screenplay. More importantly, Lucker — who has written over 20 features for such studios as Paramount, Disney, DreamWorks, Fox and Universal — shares his personal experience of how to sell it.

Students find something in Lucker’s approach missing from so many other screenwriting gurus: years of legitimate screen credits paired with university teaching bona fides. “My students told me I needed to write a book,” says Lucker. Returning to the days when he wrote screenplays on spec, Lucker says he “took a whack at a chapter,” and sent it to Michael Wiese Productions, the leading publisher of screenwriting books in the world. To his surprise, they responded within the hour.

The end result is CRASH! BOOM! BANG! How to Write Action Movies. With pithy chapter titles like “Killer Concepts,” “Badass Heroes” and “Format Fun-kadelic,” Lucker distills his unique point of view into an instruction manual chock full of witty anecdotes from the trenches that gives readers a window into the up and downs of the writer’s path. “The perspective of a Hollywood insider with classroom experience makes for a fun, informative ride for everyone involved, whether they’ve written a dozen scripts or [are] embarking on their first,” Lucker says.

With so much production invested in sequels and franchises, Lucker takes note of the lack of original content making its way into the blockbuster pipeline. “This past summer, the box office grossed its lowest amount in 10 years, largely because audiences are tired of seeing the same stories over and over,” he says.

If the modern audience is going to awaken from its slumber, and blockbuster movies are going to compete with video games, streaming services and thousands of other distractions, Lucker argues writers need to create that same symbiotic experience of a video game, while also making the audience care about the protagonists. He believes now is a time for tremendous optimism for screenwriters. “Now that we’ve hit a new bottom, they’ll have to find new ways to turn a dime,” he continues. “The question is whether audiences are ready for something new.”