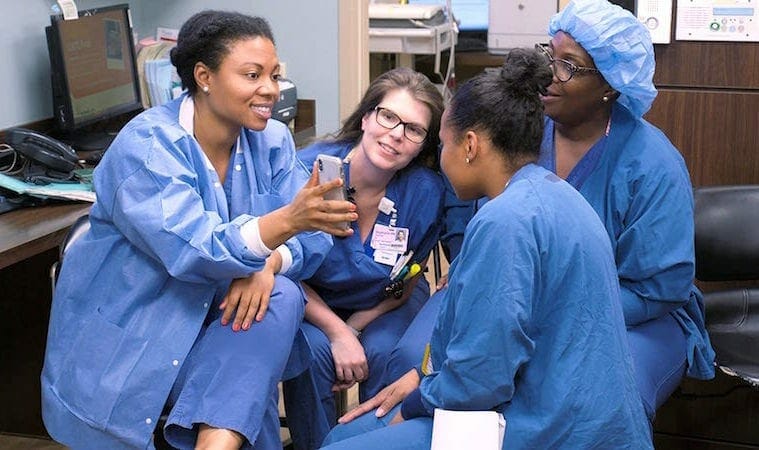 The Netflix documentary "Lenox Hill" takes an intimate look at the lives of four doctors -- two brain surgeons, an ER physician and a chief resident in obstetrics and gynecology -- as they navigate life in the New York City hospital. (Photo by Yulari Films)

Streaming in July: Thumbs up on “Lenox Hill,” a big thumbs down on “Epstein”

As Covid-19 continues its march across the nation (please wear your masks, friends), eight hours in a hospital may sound exactly like the wrong way to spend your streaming time. But Lenox Hill on Netflix is probably the most engrossing and affecting long-form documentary I’ve seen in a while. Fair warning: It has ample footage of neurosurgery (exposed brains, tumors), so each of the eight episodes might challenge the medically squeamish.

The series, directed by Adi Barash and Ruthie Shatz, focuses on four medical caregivers at Manhattan’s Upper East Side hospital: David Langer, chair of neurosurgery, and co-chair John Boockvar, who together have expanded their department in ways that make the hospital more competitive while straining its resources; Amanda Little-Richardson, chief resident of obstetrics/gynecology (and pregnant herself); and Mirtha Macri (also pregnant), an ER doctor whose job is often about addressing the emotional needs of people who come in from the streets with substance and psychological problems or nowhere else to stay for the night.

Doctors have a well-earned reputation for being arrogant, so it’s nice to spend immersive time with these four. They balance their expertise — something they sometimes have to exercise bluntly — with a transparent, humane concern for their patients. One patient, a female cop from Tennessee with a neck tumor, has to submit to such an extensive series of procedures that Langer, her chief surgeon, laments that she’s become a friend. “I hate knowing the patient so well,” he says. “That’s why you don’t operate on your family or friends.”

Lenox Hill may sound like a hard watch. In truth, it reminds us of the necessity now more than ever to rely on the skills, kindness and enormous stamina of our health-care professionals.

This documentary, at four episodes, is half as long as Lenox Hill, but I only made it through the first two hours. The world is filled with so many problems these days that reliving the entitled sexual crimes of Epstein and the cronies and cops who apparently abetted him isn’t fun. Jeffrey Epstein: Filthy Rich is a more respectable doc than, say, Tiger King, but visually and tempo-wise it’s a little static, with endless drone and tracking shots of Epstein’s Palm Beach mansion. The testimony from some of Epstein’s underage-at-the-time victims is brave and compelling, but Filthy Rich feels like a strange mixture, simultaneously salacious and dull.

Much livelier and a lot shorter is the documentary feature Disclosure, a timely look at the history of film and TV depictions of transgender characters and the progress trans actors have made lately. The host, fittingly, is Orange Is the New Black’s Laverne Cox.

Disclosure presents a breezy but pretty thorough overview of the entertainment media’s longtime dismissive portrayal of gender otherness, starting with the prevalence of ugly “comical” drag. Think Flip Wilson as Geraldine or Milton Berle in a dress. Worse were depictions of transgender characters as monsters, as in the stylish but psychologically ridiculous Dressed to Kill, the brilliant but problematic Silence of the Lambs or fun 1980s junk like Terror Train.

Things have happily changed a lot, and the doc includes interviews with notable transgender activists and artists — including filmmaker Lilly Wachowski, who says she doesn’t see The Matrix, made by her and sibling Lana when they were both cis men, as a trans narrative. But the sci-fi hit’s plot line reflects the rage she felt then at being unable to be her true self. That’s a fascinating tidbit for cineastes. Even if you’re not personally interested in the transgender movement (or the push for racial equality, which is a secondary theme here), the clip-packed Disclosure is a bonbon for movie buffs.

Much closer to home, a couple of Atlanta-made efforts are worth a look. Presented by Out of Hand Theater (full disclosure: I’ve known its artistic director since she was in high school), writer-composer-director Haddon Kime (also a friend) gives us Lag: A Zoomsical Comedy.

Atlanta actors Trevor Rayshay Perry, Rhyn Saver, Googie Uterhardt and Minka Wiltz play participants in an ongoing “class on meditation and self-care,” now forced to continue as Zoom sessions. The facilitator (Wiltz) urges them — in song — to “Inhale, exhale, as your inner peace increases.” That’s hard to do, since they’re all in lockdown. One harried mom (Saver) has even resorted to fleeing to her car to get away from the kids. (“I could never crush their faces with my bare hands,” she tries to reassure herself.)

The topics in Kime’s lyrics are familiar (Netflix, sourdough starter, murder hornets) but comfortingly so in a work whose point is the attempt to share and come to terms, together/apart, with our current normal. The music has some of the edgy, urban-neurotic energy of a William Finn musical (Falsettos, say) but has enough variety to let Wiltz cap things off with a gospel-tinged aria. Some extra good news? The musical clocks in just shy of 12 minutes. 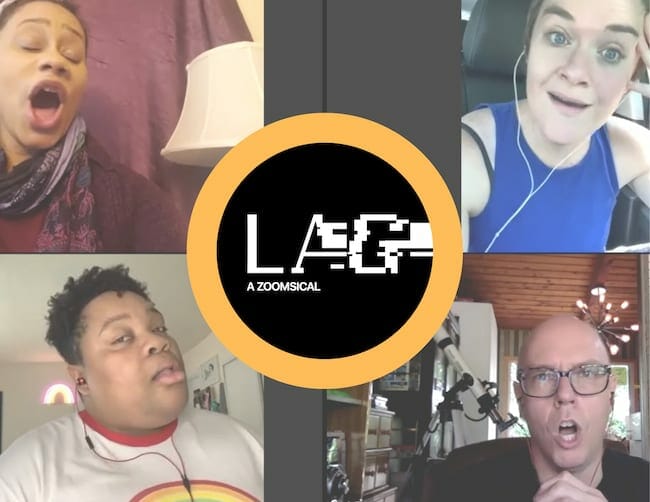 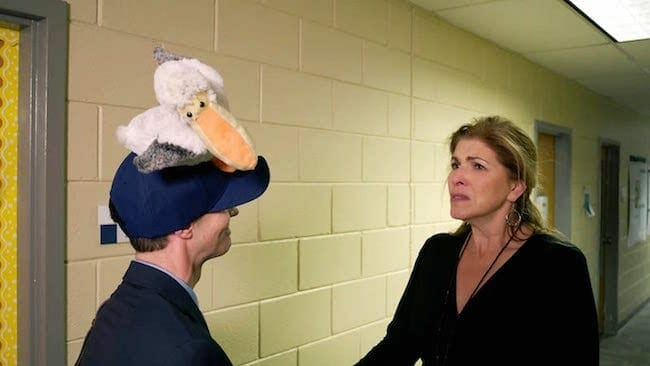 I saw only one worthwhile addition to this streaming platform, the airplane — well, cockpit — thriller 7500. A little like Tom Hardy in Locke (a terrific movie) or Ryan Reynolds in Buried (not so terrific), 7500 is largely a one-man show. Joseph Gordon-Levitt plays Tobias, a Berlin-based commercial pilot whose nighttime flight goes badly wrong when a handful of ill-defined but stereotypically Muslim hijackers storm the cockpit door and try to take over the passenger jet.

Tobias knows the rules: Open that door under no circumstances. Considering that his girlfriend, the mother of his young son, is a flight attendant in the cabin and the terrorists start to take hostages at knifepoint, this rule is hard to follow. Director and co-scripter Patrick Vollrath shows everything only through Tobias’ point of view, including the monitor of the black-and-white camera aimed outside the door. We don’t leave the cockpit, and the result, as you’d expect, is pretty claustrophobic. That may be exactly what you don’t want to watch if you’re still in any sort of shelter-in-place mode. But it’s a tense, economically crafted piece of work.

On the nuttier side, I was pleased (and a little daunted) to find that Netflix has released season three of Marcella (eight episodes). Anna Friel returns as the title character, a London cop with some personal complications of the mental kind. In the first two seasons she burned through her marriage and motherhood and found herself implicated in some murders — only, she’s prone to falling into fugue states and not remembering what she’s done.

Season two ended with such an over-the-top episode — with Marcella slicing herself half of a Glasgow smile — that to return, the show basically had to reboot itself. Here we find a newly blond Marcella going by the name of Keira, now an undercover cop infiltrating deep into the heart of a wealthy, ruthless Belfast family trafficking in humans and drugs (enthusiastically sleeping with the enemy seems to be part of her new job description). As usual, the show gets nuttier as the episodes continue, and Marcella/Keira’s mental meltdowns grow tedious. But Friel is strong, and she has a good nemesis in Amanda Burton as the steely matriarch of the family.

Season two of Ryan Murphy’s would-be comedy The Politician is also streaming, again starring Ben Platt as a scheming young man trying to build a political career no matter the cost. I hated the first season so much but decided to give the new season a chance. Bad move, even for a single episode. When Platt’s screen mother (Gwyneth Paltrow) tells her son, “It’s all about authenticity,” the moment is accidentally hilarious — not only because the super-fake Paltrow is the actor delivering the line, but because there isn’t a single authentic moment in the series. It’s a waste of talents like Bette Midler and Judith Light as Platt’s seasoned political adversaries.

Because Netflix is always good for European series that dabble in Gothic atmosphere and supernatural nonsense, I had to check out the seven-episode Curon. It’s a lot of hoodoo about a single mom and her teenage twins returning to the small northern Italian town she left, in crisis, 17 years ago. The place, Curon, is built on the shores of a lake, where an older iteration of the city was flooded years ago. And from this lake emerge evil doppelgangers of local residents, determined to kill their originals and take over their lives. Why? We never find out. I’m not sure I’d recommend it, but if you miss traveling to places where they speak another language (watch this one in its original Italian/German), Curon provides some guilty Euro-pleasures.

If you miss going to live theater, check out the National Theatre Live channel on YouTube. Since the pandemic began, the famed London institution has been streaming free filmed versions of recent productions. I’ve enjoyed an inventive adaptation of Jane Eyre, a strong Antony and Cleopatra with Ralph Fiennes and Sophie Okonedo, and a modern take on A Streetcar Named Desire with a performance by Gillian Anderson you’re likely to either love or hate.

Each show streams for one week only, from one Thursday to the next. The current offering, through July 2, is A Midsummer Night’s Dream featuring Gwendoline Christie (Game of Thrones). Upcoming performances include Terence Rattigan’s The Deep Blue Sea with Helen McCrory (remarkable in the National’s Medea a few years ago) and a new production of Amadeus.

A Facebook friend’s post a few days ago spurred me to watch Matthew Bourne’s Swan Lake, the British choreographer’s homoerotic take on the Tchaikovsky ballet, first staged in 1995 and filmed in HD in 2012. (Bourne won the Tony Award for best director of a musical during its 1999 Broadway run.) It’s great.

Finally, as we adjust to a nation that, belatedly, seems willing to address racial injustice and disparity, here’s a list of streaming features and documentaries that focus in some way on black lives.

And there are many more worth watching. Be safe.