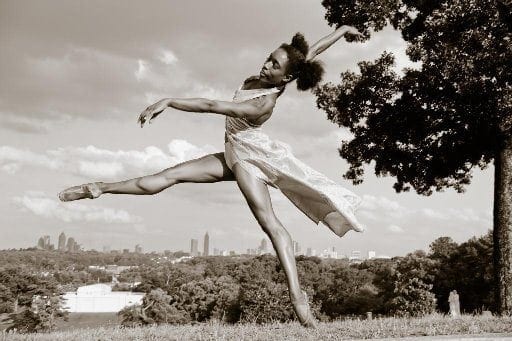 Kiara Felder says she had to deal with insecurities when she was the only black female dancer in Atlanta Ballet. (Photo by Jonah Hooper)

In 2012, at age 20, Kiara Felder joined Atlanta Ballet and became, perhaps, the most prominent black female dancer in the company’s history. Still, she was always aware of the disconnect between the city where she lived and the audience and company for whom she danced.

“Look at the demographic of the company compared to the demographic of the city of Atlanta,” Felder said in a phone interview from Canada, where she now dances with Les Grands Ballets Canadiens de Montréal. “Atlanta has a huge black population and that’s not reflected in the audience or the company. Even with such diversity in a city, it can be very segregated. There are still two different Americas, two different histories and two different worlds that haven’t come together. That could explain a lot of disparity with black female dancers in ballet.”

“I just want the organization to do better,” Pendarvis said. “I want the community of Atlanta to hold them accountable to do better.”

Jamila Hall McKnight, who left the ballet’s board in 2018, said in a comment on the post that she also saw a lack of commitment to diversity. “Here we are, two years later, and still no black ballerina in the Atlanta Ballet,” wrote McKnight. “It is a stain on the city that I pray they finally resolve.”

Atlanta Ballet President and CEO Arturo Jacobus and artistic director Gennadi Nedvigin said it is a priority to make the company more inclusive. They said the ballet has started several initiatives to recruit dancers of color and to build a pool of black dancers through its school and pre-professional program. “I hope in the very near future we will be able to hire a black female dancer,” Nedvigin said. “Trust me, this is very frustrating.”

Today, the company has four male dancers of color but no black female dancers.

“Ballet is going to have to really globally work through and unpack a lot of things,” Felder said. “Systemic racism has had an impact on every part of the planet. It’s no surprise it’s had impact on how the ballet world is shaped.”

Felder grew up in Cary, North Carolina, and studied at the Cary Ballet Company from 2000 until 2009. She graduated from the University of North Carolina School of the Arts before receiving a scholarship to Seattle’s Pacific Northwest Ballet School in 2010.

She was hired in Atlanta as an apprentice by then-artistic director John McFall and soon became a full company member.

“Atlanta Ballet was my first job,” Felder said. “I was young, at the start of my career. I considered it a good fit for me, and I met a lot of people who became extremely important as friends and aiding me in my personal development. I had a pleasant experience there and had good opportunities.”

Felder steadily rose to prominence in Atlanta. She was named one of Dance Magazine’s “25 to Watch” in 2016. She danced principal roles in the classic work Paquita and in the more modernistic Vespertine. She starred in a film short by Adam Stone, Janet: A Silent Ballet Film (see below), that honored the legacy of Janet Collins, the first African American ballet dancer to become a full-time member of a major American ballet company in 1951.

Felder said she felt the glare of the spotlight at Atlanta Ballet. “I carried an amount of insecurity being the only black woman,” she said. “It has its challenges. You feel like black women are held to a higher standard. You feel you have to be perfect — thin and not overly muscular and wanting to have perfect technique. There are some psychological mind games that occur in a lot of female black dancers’ minds that make it difficult.”

She’s also had insecurity about whether her race would affect her standing in a ballet company. “I always felt unsure if I belonged in a place,” she said. “I had directors assure me that my race didn’t put me at a disadvantage in any way. But I always wondered, is it a problem? Is it not a problem? But I was dancing.”

Felder said she did feel moments of disconnect. She made appearances on panels and at the National Black Arts Festival on behalf of Atlanta Ballet and no one else from the company joined her. “To have seen the support would have meant a lot.”

Another disconnect was between Atlanta Ballet and the city’s black community. The ballet’s audiences, typically, are overwhelmingly white. “It’s important to engage with the community, and it’s tough when the community looks one way and your company looks another,” Felder said. “That may be one reason the audience was what it was. It would be amazing to see the demographics of the company reflect the demographics of the city. I wish those correlated more in the arts. It’s not that way in most companies.”

Nedvigin became artistic director in 2016, and Felder joined a mass exodus of longtime dancers at the end of the 2016–17 season to take a job with Les Grands Ballets, a company she had aspired to join. Felder said she danced some of her best Atlanta Ballet roles during her year with Nedvigin. “That was not a bad relationship at all,” she said. “It was chaotic that year; half the company ended up leaving and that obviously points to the feeling of tension in the studio. But I performed to the best of my ability. I’m a strong dancer and put in a lot of work to be my best.”

The challenges of black ballet dancers

In Montreal, Felder is one of two black female dancers with Les Grands Ballets. In one of her first performances, she was the principal dancer. Every female dancer around her wore a white leotard while Felder wore chocolate brown tights and shoes. “You would have to be blind not to see the contrast,” she said. “And your eyes follow the contrast.”

She thinks the paucity of black female dancers is an international issue born out of the roots of racism. “It’s no surprise there aren’t that many black dancers,” she said. “It’s the result of a much, much bigger thing of racial division and socioeconomic imbalances. The outreach programs to serve communities that are underserved are there for a reason, and highlights the fact it’s not fair in general.”

Aspiring black ballet dancers have challenges. One is not seeing anyone like them on stages. There also are financial and access challenges. Also, Felder said, there’s often pressure from parents to go into more lucrative fields. When Felder told her mother that she wanted to pursue a career in ballet rather than immediately go to college, her mother wept.

“I know some black dancers, their parents put pressure on them to go to an Ivy League school or prestige school rather than go to ballet school for a profession that doesn’t pay that well,” said Felder, who’s now pursuing an undergraduate degree in her off time. “Some ballet jobs don’t pay well enough just to survive.”

It’s also a profession that requires tunnel vision and drive. “Burnout is something I’ve had an interesting relationship with,” she said. “Ballet dancers are really strong people, really strong souls. Ballet is difficult for everyone, and it’s even a more daunting profession.”

On top of that, jobs at ballet companies are few and the competition is fierce.

Felder hopes that the Black Lives Matter movement will bring substantial and meaningful change. “It’s a complex issue,” she said. “It’s deeply rooted and complicated. I’m very hopeful with the kinds of conversations I’ve had with non-black people and how this is all across the planet. It’s probably the largest unified response to racial injustice that’s ever been recorded in history. That’s pretty amazing. I’m really encouraged by it. It’s encouraging just to have these kinds of conversations.”