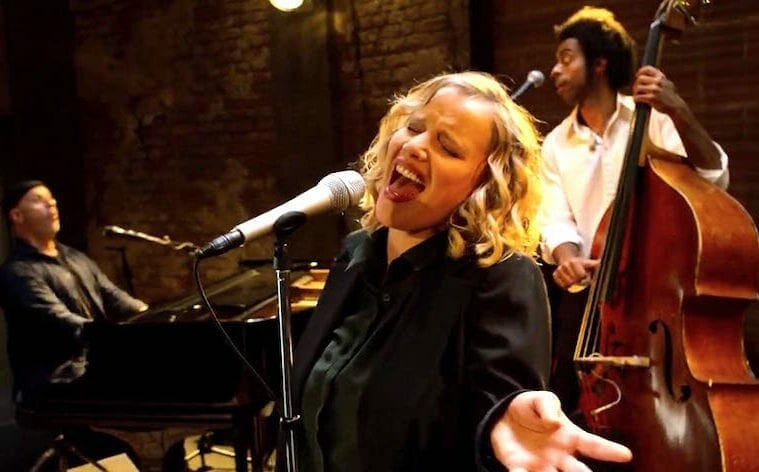 In the Eddy, the Parisian jazz club of the title, with actor-musicians Randy Kerber (from left), Joanna Kulig and Damian Nueva. (Courtesy of Netflix)

Streaming in June: Our top picks include jazzy “The Eddy,” sci-fi comedy “Upload”

One of the most satisfying, immersive binges I’ve enjoyed lately is the limited Netflix series The Eddy (eight episodes). Here, co-creator Damien Chazelle doesn’t white-man-splain jazz, the way he did so lamentably in La La Land. The music here is the lifeblood for the characters who congregate in and around the title bar in a not-so-great Parisian neighborhood.

That’s where owner and ex-star jazz pianist Elliot (André Holland) tries his best to push the house band, led by singer Maja (Joanna Kulig of Cold War), toward a recording deal, while he relearns how to be a dad to his emotionally volatile teenage daughter (Amandla Stenberg), who’s been dumped on him by her pampered mom in New York. There’s a lot going on — for Elliot and for viewers — especially as Eastern European thugs start threatening the club’s survival, thanks to iffy deals made by the Eddy’s co-owner (Tahar Rahim, of A Prophet).

Each episode focuses on one main character as the club withstands a cascade of challenges. The series has the depth and flavor of one of the grand epics of HBO stalwart David Simon (The Wire, Treme). The actors are all engaging, even the nonprofessional ones in the band, including Randy Kerber, who wrote the show’s music. Holland, a magnetic performer, is always watchable. The downside is that his Elliot is so stressed out for most of the time that it feels like a full-body release when he smiles in the final episode. The Eddy is a commitment, and I have a friend who couldn’t stick with it. But it made my quarantine hours tick by faster.

A much easier watch — but with quickly diminishing results — is Hollywood (seven episodes), the latest flashy, trashy product from Ryan Murphy (American Horror Story, Pose). Another friend gave up watching this, turned off by its heavy emphasis on sex (of all varieties). The sex, for me, was the least of the show’s problems.

Rewriting history in the way that Quentin Tarantino saved Sharon Tate at the end of his last film, Hollywood gives us a postwar film industry whose secret heartbeat is an all-service gas station-cum-bordello, where handsome young men with dreams of stardom or screenwriting success fill their piggy banks by turning tricks with the movers and shakers of the big-screen dream industry.

One is a golly-shucks slice of beefcake named Jack (David Corenswet), who only takes money from ladies. Another is his black pal, Archie (Jeremy Pope), who’s fine with bedding guys and is trying to sell a screenplay. Murphy regular Darren Criss plays Raymond, the film director who not only wants, improbably, to shoot a film written by a black man, he wants his girlfriend, also African American, to star. Needless to say, none of this happened or would have happened in the real Los Angeles of the time.

At first, there’s something liberating and charming about the show’s multiracial, omnisexual approach. But like other Murphy series, it quickly starts to suffer from scenes and characters that are situationally fluid with no psychological grounding. Nothing means anything, and every character’s motivation can change if the plot requires it.

Look, I’m as guilty as anyone of enjoying the high-camp spectacle of Broadway star Patti LuPone as the wife of a studio head, getting serviced from behind by a hustler (who becomes, of course, a movie star). But some guilty calories are more nutritious than others. Proceed with caution, or just let yourself enjoy the blatant nonsense of it all. You’re alone with your screen. We don’t judge you for finishing that pint of ice cream, either.

The biggest Netflix disappointment is one that should’ve been a home run. Space Force (10 episodes) was co-created by star Steve Carell and Parks and Recreation creator Greg Daniels. Carell plays General Mark Naird, who’s assigned to lead the newly created military branch designed to expand America’s interests beyond our big blue marble. The show includes plenty of talented comedians, including Jane Lynch and Lisa Kudrow, and a few untalented ones like Ben Schwartz. It even has John Malkovich as a soft-spoken chief scientist.

Watching the show (well, four episodes until I couldn’t take anymore), I had a very odd sensation. I wasn’t just not enjoying this intended comedy, I was actively getting both bored and annoyed. Timing is everything. When the co-creators developed and shot this wannabe workplace satire about a nincompoop making dodgy “gut” decisions against the advice of scientific experts, it probably seemed like a good metaphor for the Trump administration. Now, with 100,000-plus Americans dead from Covid-19, it’s badly timed. But the thing wouldn’t be very funny even if it had dropped six months ago. It’s sluggish and, line by line, just not funny. On the other hand, I’m really enjoying another new Daniels-created series on Amazon Prime (keep reading, please).

Also new is Sweet Magnolias (10 episodes), based on a series of novels. Shot in Covington, doubling for the lowcountry and giving work to Atlanta-based actors (yay), it stars Heather Headley (who originated her Tony Award-winning title role in the musical Aida at the Alliance Theatre a million years ago), JoAnna Garcia Swisher and Brooke Elliott (Drop Dead Diva). They play lifelong BFFs dealing with low-stakes dramas in their small town of Serenity, South Carolina. Things like getting over a divorce, firing a drunken employee, converting a historic mansion into a spa for nice Southern ladies and having the hots for your teenage son’s football coach, etc. I watched a couple of episodes. The show isn’t my cuppa, but like its title, it’s sweet and harmless enough . . . except maybe for the way a few actors butcher their attempts at a Southern accent. Oy, some things never change.

And now, for something completely different. Hannah Gadsby: Douglas is the follow-up to the comic’s 2-year-old stand-up sensation, Nanette. Nothing in the new set quite approaches the alternately funny and emotionally powerful self-revelation in the original, but she proves again to be a unique force, proud to declare her membership on the autism spectrum and helping us see the world through her eyes as she deconstructs the very idea of stand-up. She hits her sweet spot — art history — near the end, and delivers a rapid-fire set of jokes about some of the more perverse, male-gaze works of art made through the centuries. She caps it all with a joke she told us she was going to tell — but delivers with the perfect timing that ends the show on a note of weird bliss.

Netflix | Kimmy vs. The Reverend

Speaking of weird bliss, fans of the sweetly insane Unbreakable Kimmy Schmidt should check out the stand-alone, interactive movie Kimmy vs. the Reverend. It’s really just an excuse to gather together the old cast, including Titus Burgess, Carol Kane, Jane Krakowski and Jon Hamm, and let them be stupid again.

Stupid in a different way is the guilty pleasure White Lines, created by Álix Pina, maker of Money Heist. Laura Haddock (a little high-strung and one-note) plays Zoe, a young Manchester wife and mom who travels to Ibiza when the body of her big brother, Axel (Tom Rhys Harries), is discovered. He disappeared 20 years earlier, when he was the hard-partying island’s top DJ. There, she encounters the three best friends who traveled with Axel, now adults engaged in the club and sex scenes, with cocaine running on the side. As Zoe tries to discover who killed Axel, if indeed it was murder, Lines zips back and forth on two timelines. At 10 hourlong episodes, the sun- and drug-drenched series is too long. (For me, there’s way too much time spent on Zoe’s dithering between married life and her affair with a hunky islander.) But it’s fun in a sordid way, and since we can’t fly to places like Ibiza right now, this will do.

The Greg Daniels-created show I mentioned earlier — and recommend — is Upload (10 episodes). The high-concept sci-fi comedy cherry-picks elements from things like the movie Her, The Good Place, Black Mirror and even the futuristic cityscape look of Westworld’s recent season but still feels fresh.

Robbie Amell (cute, bland, inoffensive) is Nathan, a techno wiz who has a freak, fatal accident in his self-driving car and has his memories, perceptions and what we call soul uploaded into a digital afterlife paid for by his vain fiancée, Ingrid (Allegra Evans). In this sweater-catalog-worthy plain of existence, at a resort called Lakeview, Nathan wanders  the scenic lodge (where all employees are played by Owen Daniels, Greg’s son) and struggles with the fact that while many of the perks are free, others must be paid for by the unfocused Ingrid. Capitalism reigns, even in the afterlife.

Nathan eventually finds a sort of soulmate (Andy Allo), a living “angel” who monitors his existence and responds to his needs via her computer monitor at Horizen, the corporation that runs Lakeview. Upload gradually becomes a cross-existence romance between the living and the not-quite-alive. And also a mystery, as evidence suggests that Nathan’s accident resulted from industrial sabotage. Plot aside, what keeps Upload delightful is its quick wit and ability to surprise.

Amazon Prime | The Vast of Night

The same might be said for the original film The Vast of Night, initially screened at 2019’s Slamdance Film Festival. Director Andrew Patterson’s micro-budget drama emulates an old sci-fi TV show, modeled on The Twilight Zone. It focuses on a 1950s night in a tiny New Mexico town where a teenage switchboard operator (Sierra McCormick) and a recent high-school-grad-turned-DJ (Jake Horowitz) start to realize there may be something ominous in the dark sky above them. (Roswell, New Mexico, is not far away, after all.) The film is slight but full of atmosphere, with clever use of tracking and drone-facilitated shots that travel across the sleepy, quiet town. Like many sci-fi films, even those with real budgets, the big reveal and resolution are a letdown. But it’s an admirable calling card for the first-time director and his cast.

Also worth note is Seberg, mainly because it features Kristen Stewart, who has fully shaken off the teen-romance stigma of her Twilight phase with challenging films like Olivier Assayas’ The Clouds of Sils Maria and Personal Shopper. The new film, directed by Benedict Andrews, is nowhere in that league. Instead, it takes the life and travails of Jean Seberg (1938–1979), the American actress who spent much of her life in France, and jams them into a standard biopic structure that’s not nearly sufficient for the iconic actor’s tumultuous life. Worth a look for Stewart, though, who’s always committed, even in mediocre flicks.

Finally, there’s good news for fans of Netflix’s Dead to Me and Amazon Prime’s Homecoming. Their second seasons are now streaming. Happy watching, and stay safe.