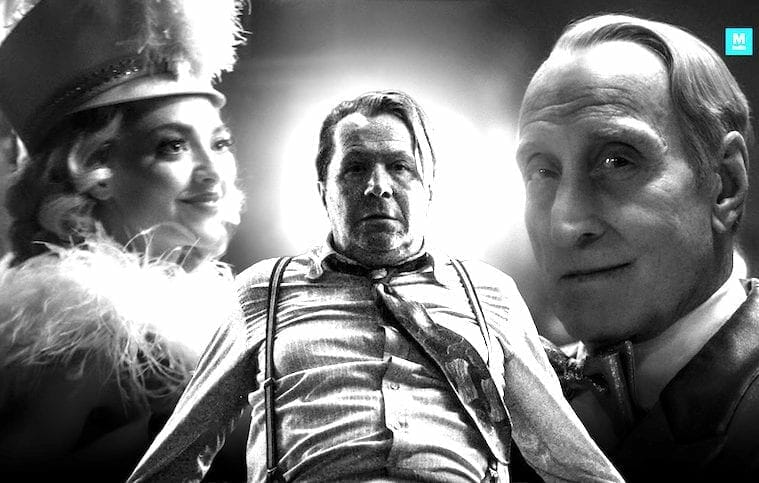 Like Christopher Nolan, David Fincher has become a contemporary director fetishized by film lovers, while lacking the baggage of Nolan’s more annoying narrative tics and pretensions. He’s a maker of precision-tooled prestige films that can be as chilly as they are finessed (Gone Girl, The Girl With the Dragon Tattoo, The Social Network). He spooked us with Zodiac and Se7en, but lest we forget, he almost single-handedly destroyed a venerable sci-fi franchise with his third Alien film.

That’s a long way of saying I like Fincher but don’t idolize him. The Netflix feature Mank shows off a mix of his strengths and weaknesses. Adhering to New Yorker critic Pauline Kael’s disputed thesis that Citizen Kane was primarily the brainchild of screenwriter Herman Mankiewicz (though director Orson Welles shared a screen credit and the film’s single Oscar win), Mank is shot in shimmering monochrome and features old-timey rear projection, process shots, fractured chronology and direct visual quotes that pay homage to the 1941 original. It’s a movie buff’s dream. It’s also a problem.

Gary Oldman embodies the boozing, wisecracking Mank, sidelined with a broken leg and sequestered at a desert ranch with a prim assistant (Lily Collins) to nurse him as he writes the script that will become Welles’ professional calling card, and albatross. Citizen Kane, famously, is a barely veiled gloss on publisher William Randolph Hearst and his actress inamorata, Marion Davies. And Mank, we learn, was a good pal of the power couple in the 10 years before he chose to betray them on-screen.

To explain and justify the writer’s double-cross of his old pals Marion (Amanda Seyfried) and Willy (Charles Dance), the movie digs deep into the minutiae of muckraking novelist Upton Sinclair’s bid to become California governor, and the insidious ways Hearst and Louis B. Mayer (Arliss Howard) used MGM to sabotage the campaign. This is an interesting footnote, but dramatically it never quite ignites.

Before the film gets stuck in its dramatic quagmire (the script is credited to Fincher’s late father, Jack), it tries too hard, with rat-a-tat “clever” dialogue from Mank and his fellow word wranglers, S.J. Perelman, Ben Hecht, George S. Kaufman and Charles MacArthur. These shrill, loud scenes are remind us that the high-torques dialogue of a classic like His Girl Friday is a rare miracle and hard to imitate.

Mank is well worth watching and is sure to be in the conversation for year-end awards. Working a Brooklyn growl, Seyfried has affecting moments as the sharp, strategic Davies. Dance is in elegant, sinister form. And Oldman, puffy-eyed and sardonic, is his reliable self. But even he can’t salvage a protracted drunken meltdown at a costumed dinner party. It’s a painful scene to watch but not in the way it’s intended to be.

Oddly, in treating the old Hollywood story with such expensive, lavish literalism, the movie deprives the legend of its flirtatious, what-if pleasures. It reminds me of the tale of Greta Garbo, who cried out when monster turned into man at the end of Cocteau’s Beauty and the Beast, “Give me back my beast!” I feel that way about Mank. Gimme me back my myth.

Hillbilly Elegy, a prestige film that shot large portions in Georgia, is a bigger holiday-season disappointment. Like the passenger-window views of po’ folk setting on front porches at its start, it’s a case of drive-by cultural condescension.

From what I’ve read, J.D. Vance’s best-selling, serendipitously timed election-year book was itself a confused exploitation by the writer of his “own” story. Amy Adams and Glenn Close (in a fried-perm wig) play Bev and her mom, known as Mamaw. They are Ohio transplants, by way of Kentucky’s hill country. They Fight Hard, Love Hard and Act Hard.

At stake is their bid to plot the future of Bev’s kid J.D., a feckless go-between as a boy (played by Owen Asztalos) and an earnest blank as a man (Gabriel Basso) attending Yale but unable to identify the correct fork to use at a formal dinner. At either age, his life is upended by his mother ‘s addiction to pills, heroin and the wrong men. Mainly the film is about yelling, recrimination and misery among the womenfolk. It lacks a shred of insight (emotional, political, socioeconomic) about who these people are, how they got here and why we should care about where they’re going.

Uncle Frank, another Southern saga from Marietta native Alan Ball, feels like something the writer–director could have written long before he broke through with American Beauty (1999) and Six Feet Under (2001–2005). It might have seemed brave and sensitive in the mid-1990s, but in 2020, the dramedy feels timid and even a little wrongheaded.

You can’t fault a strong supporting cast that includes Judy Greer, Margo Martindale, Stephen Root and Steve Zahn as residents of small South Carolina town in 1974. The problem starts with the leads, Paul Bettany as Frank, a lit professor in New York, and Peter Macdissi (Ball’s partner in real life) as Wally, his Muslim lover (though nobody back home knows Frank is gay).

That changes when his loving niece Beth (It’s Sophia Lillis) takes a road trip home with Frank when his abusive, homophobic dad up and dies. The closer they come to South Carolina, the more Frank struggles with guilty memories of his first true love and his own internalized homophobia. Bettany is a decent actor and works hard, but he can’t sell the old-school, simplistic psychology; Macdissi, in a bad wig and a vat of mascara, comes on too strong as the loving “ethnic” boyfriend.

NETFLIX  |  The Life Ahead

The Life Ahead is based on the novel that also inspired the Simone Signoret-starring Madame Rosa (1977). Predictable and bathed in sentiment, it’s the tale of an elderly concentration camp survivor who turned tricks after the war. She now makes ends meet by tending the children of younger, active sex workers. It’s not the greatest story in the world, but this retelling has Sophie Loren, directed by her son Edoardo Ponti. After stalking into frame in her first feature film in more than a decade, Loren reminds us of the quality we don’t see much anymore: star power. She doesn’t overact. She doesn’t try. She doesn’t need to. Even at 86, with her dazzling looks long gone, the camera adores her.

Young actor Ibrahima Gueye plays Momo, the latest kid (and shoplifter) to land at her house. She doesn’t want him, but we know that their frosty détente will thaw, and that the boy and the old lady will become indispensable to each other. Getting to that preordained relationship is a sweet enough journey. In Italian with English subtitles.

This is old news. Everybody I know has already watched and loved the limited series The Queen’s Gambit (seven episodes). The stunning Ana Taylor-Joy is probably miscast as Beth, the orphaned, unlucky protagonist who finds self-worth in becoming a chess champion in the boys-only 1960s. (This Beth could fail at checkers, but still be an international model.) The distraction of her beauty aside, Taylor-Joy is mesmerizing, well supported by director-actor Marielle Heller as the woman who adopts Beth but has her own demons to fight; Thomas Brodie-Sangster and Harry Melling among a bevy of chess playing boys who contend with then-champion Beth; and Bill Camp, in the tiny but crucial role of the crusty school janitor Mr. Shaibel, who teaches young Beth (portrayed with solemn intensity by Isla Johnston) to play the royal game. The heart of Gambit is the moment when young Beth, unloved, tentatively places a hand on the unloved Mr. Shaibel’s shoulder.

Gambit was adapted by Scott Frank from a 1984 novel. He did the same trick of translation with Out of Sight (1998), giving us the best screen version of an Elmore Leonard novel and inspiring personal bests from George Clooney, Jennifer Lopez and director Steven Soderbergh. Three years ago, he wrote and directed the revisionist, feminist Western Godless for Netflix, so if you haven’t already watched that, put it in your queue.

Also old news is the fourth season of The Crown. Some people are watching the newest 10 episodes without having watched the previous 30, simply because they want to watch the rise and collapse of Prince Charles and Princess Diana’s relationship. I suggest going back to the first season, when the royal family didn’t quite look like the den of snakes the latest season depicts. Sheesh. It’s still a great watch.

Let’s take note of three seasonal originals: Jingle Jangle: A Christmas Journey, The Christmas Chronicles 2 with Kurt Russell and Goldie Hawn, and Christmas on the Square, starring (and featuring 14 songs by) everyone’s favorite COVID-vaccine donor, Dolly Parton. Tell me if they’re any good. This year has  been so challenging, I just couldn’t try getting through them.

Halloween would have been a better time to see Truth Seekers, but no season could make this lame comedy much more watchable. It’s a shame, because the eight-episode series reunites Shaun of the Dead and Hot Fuzz collaborators Simon Pegg and Nick Frost. Frost plays a tech repairman who moonlights as a paranormal detective uncovering ghosts in the British suburbs. A bit like Uncle Frank, the script feels a few years — possibly even decades — old and not punched up for our today. It’s neither funny nor scary.

Under the umbrella title Small Axe come five new films by Oscar winner Steve McQueen (12 Years a Slave, Shame) about the experiences of West Indian immigrants in London in the 1960s and ’70s. A new film drops every Friday. I’ve watched the second, the short drama Lovers Rock. Nearly plotless and little longer than an hour, it centers on a reggae-infused dance party. The main characters are Martha (Amarah-Jae St. Aubyn), who slips out of her bedroom window to enjoy the all-night fun, and a fellow she meets there, Franklyn (Micheal Ward). As the walls drip with condensed sweat, the camera prowls around the house, finding small but sometimes seismic encounters you’d expect to find at a boozy, smoky party. It can give you a contact buzz.

For those who miss the live stage, the UK’s National Theatre London — after screening many of its productions free last spring — has gone the monetized route. It’s offering monthly and yearly subscriptions to its significant archive of productions. I’ve signed up and can’t wait to keep watching. Go HERE.

Steve Yockey — a prolific playwright familiar to Atlanta audiences (Wolves and Reykjavik at Actor’s Express) — is showrunner of the comedy thriller The Flight Attendant about, well, a flight attendant (Kaley Cuoco). Her life gets complicated when a one-night stand leads to a corpse in her bed. The last of the series’ eight episodes will air December 17, and the reviews have been great.

NEED MORE? Catch up to our  November column, which reviewed The Trial of the Chicago 7 on Netflix and Borat Subsequent Moviefilm on Amazon Prime, among others.