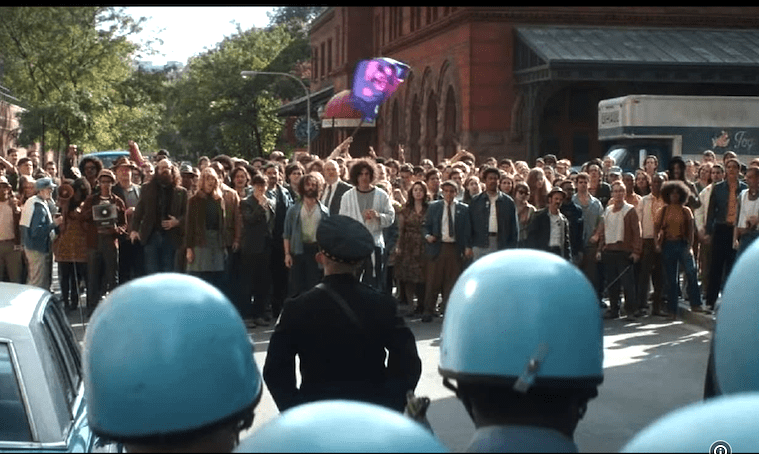 Netflix's "The Trial of the Chicago 7" features Eddie Redmayne as Tom Hayden, Sacha Baron Cohen as Abbie Hoffman and Yahya Abdul-Mateen II as Bobby Seale. The script is from Aaron Sorkin ("The West Wing," "The Newsroom").

Streaming this month: “Chicago 7,” “Borat” and plenty for a frightful Halloween weekend

In a double whammy, Netflix’s The Trial of the Chicago 7 and Amazon Prime’s Borat Subsequent Moviefilm prove that Sacha Baron Cohen isn’t just a funny guy, but an actor with extensive range, in movies that unfortunately speak to our present moment. 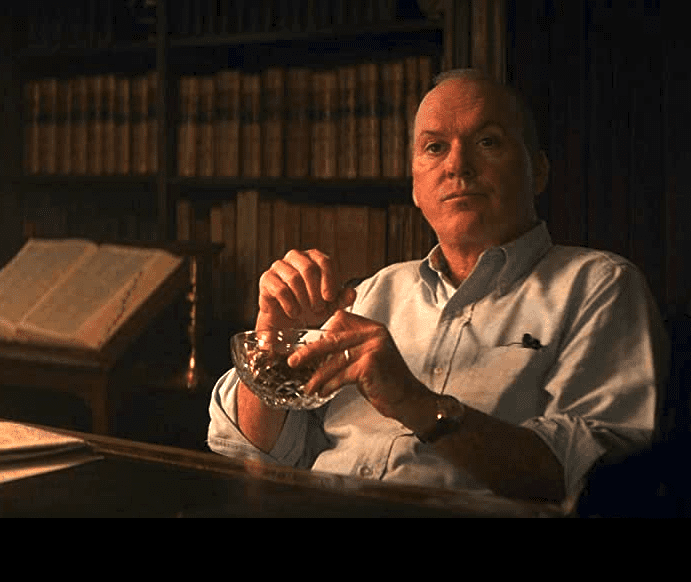 The most recently dropped film, Borat­ — high five! — is getting the most attention, so let’s roll back first to Chicago 7, a dramatized look at the legal travails of a group of anti-war protesters fingered as political scapegoats by Nixon’s attorney general John Mitchell.

“The president isn’t a client of the attorney general,” former AG Ramsey Clark (Michael Keaton) scolds some of Mitchell’s Justice Department flunkies. The moment is a reminder of the ways in which history is repeating itself in abuse-of-power parallels between Nixon and Mitchell, and Donald Trump and William Barr.

Fueled by writer-director Aaron Sorkin’s admirable/annoying rat-a-tat dialogue, the drama focuses on the kangaroo court trial of the so-called seven, charged with intentionally provoking violence at the 1968 Democratic National Convention. While, yes, these men were all driven by a shared need to protest the war in Vietnam, they weren’t a cohesive unit; some had never even met. That was especially true of the provisional eighth man on trial, Black Panther leader Bobby Seale (Yahya Abdul-Mateen II), whose brutal and dehumanizing treatment by the court exemplified the bias brought to bear on proceedings overseen by an authoritarian judge (Frank Langella, satanically majestic).

Sorkin uses the historic record to turn real-life figures into vibrant, clashing characters — especially politically cautious Tom Hayden (Eddie Redmayne) and his polar opposite, the Yippie leader and standup provocateur Abbie Hoffman (Cohen). Hayden wants to play by the rules, keep a low profile. Hoffman wants to cause chaos and provoke change by whatever means necessary. Sorkin’s script shrewdly bends these characters on an arc of reconciliation — a welcome message these days.

Hoffman may be a surprise standout, a snarky class clown who becomes a voice for his fellow defendants and the war-weary nation during his closing courtroom remarks. But it’s a fantastic cast in general, including such Oscar, Emmy and Tony Award winners as Mark Rylance (Bridge of Spies) as defense attorney William Kunstler, Jeremy Strong (Succession) as Jerry Rubin and key players like Joseph Gordon-Levitt as the government’s lead prosecutor.

A much more clownish Cohen returns as Borat in Moviefilm. In the 14 years since he arrived as the naïve, sexist Kazakh journalist, the comic’s creation has become so recognizable that he must spend much of the sequel wearing outlandish disguises to pull gags on unsuspecting, often racist/sexist and QAnon-deranged Americans. The movie finds him traveling the country in the hopes of bribing Vice President Mike Pence.

The bribe? His feral 15-year-old daughter Tutar. Because daddy is partly in hiding, it’s up to Tutar to deliver about half of the film’s outrageous stunts. Bulgarian actor Maria Kakalova, 24, is spectacularly up for it — whether she’s having a bloody debutante dance at Macon’s Hay House, appalling a pro-life health clinic operative by asking him to remove the baby her daddy put inside her (it’s not what you think) or fending off the creepy modern Joker we know as Rudy Giuliani. It’s a fantastic debut for the young actor. The new movie isn’t as shocking as the first; having daughters in real life with actor Isla Fisher has softened both Cohen and his movie, not in a bad way. But if the gags are not quite as sharp, the movie’s COVID-19 narrative delivers a sneaky, cumulative punchline.

NETFLIX  |  The Haunting of Bly Manor

Just in time for Halloween two years ago, horror writer-director Mike Flanagan took Shirley Jackson’s slim, devilish psychological ghost story The Haunting of Hill House and adapted it for Netflix as a sprawling, modern-day, deconstructed family saga with clever but sometimes tenuous connections to the original book. It shouldn’t have worked, but, despite a wobbly ending, it did.

With The Haunting of Bly Manor, he takes Henry James’ slim, devilish psychological ghost story The Turn of the Screw and tries the same trick, but everything hits the floor with a loud bang — like the plates and cutlery after a magician’s failed tablecloth trick.

In 1987 England, an American named Dani (Victoria Pedretti) takes a job as governess to the niece and nephew of landed toff (Henry Thomas, like several other actors wrangling an uneven British accent). At Bly Manor, rather than encountering the unnerving, suspicious staff we usually find in Gothic tales, Dani is surrounded by a welcoming, cheerful cook (Rahul Kohli), housekeeper (T’Nia Miller of HBO’s Years and Years) and tomboy gardener (Amelia Eve). And the kids, Flora and Miles, are adorable. Despite this, anyone familiar with James’ tale (or the best of its adaptations, Jack Clayton’s 1961 film The Innocents) knows Dani will soon suspect the tykes are supernatural pawns of the previous governess and her lover, now dead.

Are the ghosts real or in the governess’ head? That’s the key twist of James’ story. But the question is never in dispute in this overlong series (nine episodes). Not only are the ghosts real, clomping around visibly and loudly throughout the lavish, unconvincing interior sets, a main characters turns out to be post-mortem, if very much corporeal. Midway through, the series gets stuck in a welter of flashbacks and narrative loops, stretching the running time toward infinity.

I have friends who like Bly, largely because the final episode turns into an unexpected, sweet love story. Yes, it’s nice, but it’s an add-on. Considering that it has Haunting in its title, the series fails its main remit: to be scary, rather than touchy-feely-dull.

Another adaptation of a classic mystery, Daphne du Maurier’s Rebecca, is much more straightforward and the latest of at least 10 film or TV versions of the story. It’s likely to be remembered as the prettiest to look at . . .  more likely it won’t be remembered at all. That’s surprising, because the director is Ben Wheatley, a border-breaking director with fascinating, gruesome films including Kill List, A Field in England and High-Rise.

Here he takes du Maurier’s story . . . and does absolutely nothing with it. Lily James plays the unnamed second Mrs. de Winter, haunted by the reputation of Rebecca, the first wife of widower Maxim (Armie Hammer). The actors are nice to look at, but the only person that makes an impression is Kristin Scott Thomas as Rebecca’s devoted, vengeful lady’s maid Mrs. Danvers.

Amazon Prime honors the spooky season with four original films from Blumhouse Productions (makers of The Invisible Man, Get Out, The Purge, Sinister, Paranormal Activity, etc.). The best of these may be The Lie, which was slated for a genuine, in-theater release before COVID-19 screwed up everything.

Based on the German film We Monsters, the wintry thriller features Peter Sarsgaard and Mireille Enos as the separated parents of teenage Kayla (Joey King). When it seems that the girl, in a fit of jealousy, has killed her best friend, the parents unite to cover her tracks — and start to get close again. Writer-director Veena Sud wraps the whole thing up with a nasty, O’Henry-type twist.

Also worth watching is Black Box, an inquiry into identity wrapped in sci-fi packaging. Mamoudou Athie plays Nolan, a professional photographer struggling to get his life together after an accident that took his wife’s life and left him with wiped memories and short-term memory loss that plays like early-onset dementia. Without his bossy, organized young daughter (Amanda Christine), he wouldn’t make it through the day.

His prospects change, though, when he agrees to enroll in a study involving brain scans and hypnosis (shades of Get Out), administered by an experimental scientist (Phylicia Rashad, so reassuring you know not to trust her). Sure enough, Nolan starts remembering things . . . only, they don’t seem to be his memories. Black Box keeps the puzzle intact for as long as it probably can, and caps it with a satisfying end.

Viewers of Netflix’s recent documentary series Indian Matchmaking might get a kick from Evil Eye. It’s the tale of doting mother Usha (Sarita Choudhury) who tries to oversee — from her home in Delhi — the love life of her adult daughter Pallavi (Sunita Mani) in New Orleans. That includes checking horoscopes of potential boyfriends.

Usha should be happy when a Mr. Right called Sandeep (Omar Maskati) meets cute with Pallavi, and their star signs align. But Usha, scarred by experience with a very bad boyfriend long ago, believes somehow her ex’s soul has transmigrated to Sandeep, with vengeance on his mind. It’s a silly reincarnation story, but director Elan Dassani makes the ride enjoyable, letting Choudhury unleash some powerful maternal instincts in a satisfying, last-act showdown.

Last in every way is Nocturne, the tale of sibling competition between fraternal twins Juliet (Sydney Sweeney) and Vivian (Madison Iseman). Enrolled in a performing arts school, the young pianists are vying to win the big solo at the end-of-school concert. Vivian has it all — personality, a boyfriend, ease with her talent. Juliet, the ugly duckling by comparison (unlikable and not a character you’ll root for) stumbles upon a book of black magic and plots to best her sister. Nocturne echoes some of the performance extremism of Black Swan, but mostly recalls a better original Netflix film, 2018’s The Perfection.

HBO’s six-episode The Third Day is also derivative of other films but much more creepy and engaging. It’s almost a compendium of familiar, British scary-movie tropes. Isolated island accessible via a causeway that floods with the tides, a la The Woman in Black? Check. Secretive villagers with their own scary, dark rituals, a la The Wicker Man  and Midsommar? Check.

But Third Day is elevated in its knowingness and also by a cast that includes Jude Law, Naomie Harris, Emily Watson and Paddy Considine. Law plays a man grieving the drowning death of his son 10 years earlier, who visits the island of Isea, near where the boy died. There he encounters a cult that — well, I won’t spoil it. His main story ends after three summertime episodes, and Harris enters with her young daughter in the winter many months later. The series doesn’t reinvent anything, but it’s good, eerie fun.

One last Halloween note: If you want to see something really scary (unintentionally), try the tone-deaf, materialistic celebration of ignorant, naïve Ugly Americanism that is Emily in Paris (10 episodes). It’s made by Darren Star (whose Sex and the City mojo should have stayed where it died back in 2010). It features Phil Collins’ daughter Lily as a chirpy dimwit and features lots of costume changes and French cultural clichés that were tired when Gene Kelly and Leslie Caron danced around Hollywood sets in 1951. If you can make it past the first episode, you’re braver than me. Quel horreur!

STILL PLAYING CATCHUP? Our October column looked at Challenger: The Final Flight and Ratched on Netflix, and All In: The Fight for Democracy on Amazon Prime, among others.