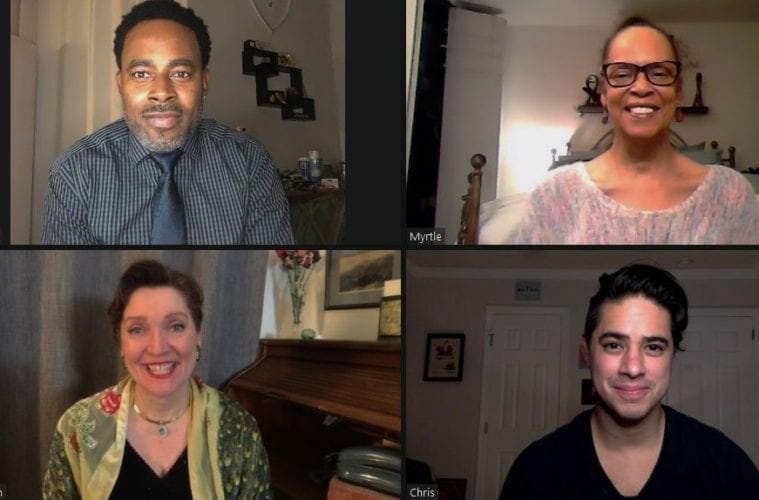 Horizon Theatre’s latest Zoom production, Love, M., is a world premiere that feels like a relic. The drama, set in the 1980s and ’90s when AIDS began claiming the lives of young men, feels like a well-intended “Very Special Episode” of a sitcom from the era. Love, M. opened December 1, on World AIDS Day, and can be seen on Horizon’s Facebook and YouTube pages through December 31.

Playwright Clarinda Ross’ script is constructed from letters and voicemails between two mothers and their gay sons. Mostly, the character speak AT one another instead of TO one another. Most of what they spout repeats themes that were well-worn by 1989 and check most of Love, M.’s boxes: that AIDS is not God’s judgment upon gay people, that homosexuality is not a choice, that abandoning your dying child is morally wrong and that the AIDS Memorial Quilt is an amazing tribute to those we’ve lost.

Designing Women was more cutting-edge and honest about this stuff in 1990.

Perhaps new audiences need reminding, but Horizon’s longtime audiences should recognize these themes. They saw a more forward-thinking variation 22 years ago in in playwright Steve Murray’s Cupid’s Bones (Murray is an ArtsATL contributor).

Ross means well. But in the wake of HBO’s filmed version of Larry Kramer’s The Normal Heart — in which a mother bribes an orderly to bring her son’s dead body to a hospital alleyway and screams in horror over the gross inhumanity of it — Love, M. needs to feel much less comfy. The existence of COVID-19 only magnifies the inadequacies. The cruelty of Love, M.’s characters gets only momentary recognition before the script moves on.

The drama begins in 1985, when a wealthy Atlanta mom named Deborah (playwright Ross) plans a San Francisco trip to visit son Chris (Chris Hecke), who’s in school and doing theater there. Neither Deborah nor her husband know that Chris is gay.

The play’s structure stifles Hecke’s Chris. The character who’s kindest to him is a female friend who we hear only in voiceover. Chris’ physical deterioration occurs in a jarring moment, when he’s suddenly covered in lesions and crying for his mother. The scene is abrupt and ridiculous and doesn’t build. Hecke, a terrific performer, does what he can, but he can’t save a scene in which he wears AIDS makeup and performs in front of a hospital–room Zoom background.

By the end of the play, Deborah is the most emotionally transformed character, but her ultimate redemption feels empty because the only person to attack her beliefs is the same unseen woman, again in a voiceover.

The correspondence structure works well enough with a Zoom-recorded performance, which may explain why Horizon staged Love, M. now, while these four actors can essentially do monologues in their own homes.

At certain moments, director Heidi McKerley allows a letter recipient to react as the writer recites the words, an effective way of connecting characters. Some letters go unopened, though, and it’s confusing because we already know what they’re going to say.