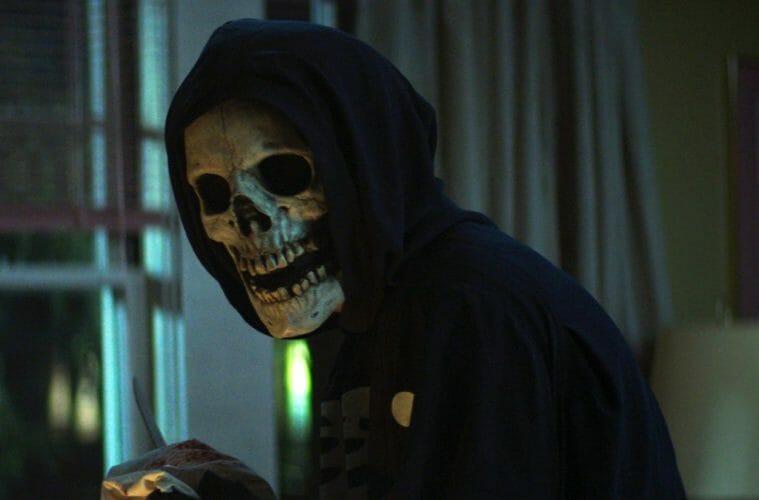 All three movies in Netflix'a "Fear Street” series were filmed in Georgia.

The Fear Street movie series on Netflix may look like just another trio of teenage-slasher romps. And yeah, the murders are gleefully and gorily delivered via ax, noose, knife, machete and (most vividly) a deli bread slicer. But there’s more going on in these Georgia-shot films. If you have a stomach for violence and some meta-textual playfulness, rewards await you.

Based loosely on an R.L. Stine YA book series, the three films focus on a starkly divided, side-by-side community: Shadyside, the working-class, economically and spiritually depressed neighborhood, and Sunnyvale, the prosperous, white-columned, White-peopled glen on the other side of the tracks. In Part One: 1994 (107 minutes), high schooler Samantha (Olivia Scott Welch) has recently moved to the latter, while her ex-girlfriend, Deena (Kiana Madeira), remains in Shadyside. Sam even feints at dating one of Sunnyvale’s football jocks. But commonplace teenage jealousy falls to the wayside when Shadyside is plagued by a rash of serial killings that seem to be inflicted by long-dead murderers from the town’s blighted past.

As has happened for centuries, the fatal shenanigans are attributed to the curse of a so-called witch named Sarah Fier, hanged in the town in the 1600s. She was blamed for maniacal murders at a summer camp in the 1970s (cue Part Two: 1978), but we’ll only learn Sarah’s true story in Part Three: 1666.

Seen in succession, the film triptych develops into something more interesting than its individual parts and the passing pleasures of an on-the-nose pop soundtrack. In a nice touch, many of the actor turn up repeatedly in the films as different characters in alternate time frames, abetting the sense that history keeps repeating itself. What may have seemed, in 1994, to be a politically correct endorsement of a same-sex relationships becomes a core element of the town’s mythology, and a factor in the films’ cumulative success.

I don’t mean to oversell the Fear Street flicks. They’re mainly gruesome, retro fun, tickling our memories of Halloween, Friday the 13th and Scream. But the series also makes some smart commentary on bigger ideas, like the ways cultural myths can be accidentally misdirected and a reminder that scapegoating has a long community tradition.

For a very different kind of summer diversion, the two-part, four-hour Us, from easy-listening novelist David Nicholls (One Day), introduces us to long-married Brits Douglas (Tom Hollander) and Connie (Saskia Reeves) at a crisis point. “I think our marriage might be over,” she says, kicking off a long, sleepless night. Though she can’t quite put it into words, Connie is looking for something that isn’t, well, us anymore.

The couple decides to stick together, at least through the summer, and continue with their European vacation with teenage son Albie (Tom Taylor), who’s going through his, I-want-to-be-a-street-musician phase. Shielding their pending separation from the boy, Douglas and Connie travel to Paris, Amsterdam, Venice and Barcelona — not bad places to visit, even with an unraveling relationship.

If, like me, you’re a fan of Hollander — usually seen as smarmy or conniving characters in things like Pride & Prejudice, The Night Manager and Pirates of the Caribbean — you’re in luck. He’s in fine, sensitive, sometimes seething form here. He’s also close to the main event. Us pulls a partial switcheroo halfway through. What promised to be a drama about a middle-aged couple dealing with their personal issues becomes more of the Hollander show, as Connie gets sidelined and the focus turns instead to Douglas’ pursuit of their AWOL son, who goes on the lam to parts unknown, chasing a busking life with a newly met girlfriend (the engaging Thaddea Graham).

The miniseries’ father-son struggle is clichéd for much of the running time, until it takes one welcome, surprising turn. As a whole, Us is thoroughly middlebrow, delivering a happy ending, though one that’s wise enough to come with notes of melancholy. If nothing else, with its European settings, it provides some easy-viewing, travel-porn.

More than just a music documentary, Woodstock 99: Peace, Love and Rage (110 minutes) is a fascinating and unsettling time capsule that locates the first inklings of our currently divided culture in Rome, New York, 22 summers ago.

A disaster that predated the much-mocked Fyre Festival many years later, Woodstock 99 was held on a sweltering, abandoned military base — mainly because its sturdy perimeters ensured that the festival’s investors wouldn’t lose the kind of money they did when concertgoers broke down the original Woodstock’s fences without buying tickets. Avarice, not peace or love or unity, was the driving force of the ’99 fest from the get go.

Of the packed musical bill over three hot July days and nights, only three acts were women artists (Sheryl Crow, Alanis Morrisette, Jewel). The rest were the kind of agro-guy bands personified by Limp Bizkit and Metallica. Long before the Me Too era, this was a time when women were casually objectified (Girls Gone Wild was still a thing), and many of the outnumbered female festival attendees abetted the mindset, wandering around topless or wearing only body paint. But that’s not an excuse for the wave of sexual assaults that erupted, one of a number of violent actions that rocked the event.

A giant organism leaking Y-chromosome grievances mixed with entitlement, Woodstock 99 proved to be the antithesis of the original Woodstock’s utopian ideal (that ideal was itself mythologized, since the actual event was plagued by logistical nightmares that foretold similar glitches at its namesake festival 30 years later). Director Garret Price’s documentary spins out a thesis that seems farfetched at first, but looks increasingly convincing the more you watch: The ’99 festival was a cultural crucible that caught the developing zeitgeist of white male rage that flowered fully during the Trump years.

If you’re in the mood for something with music at its core, but a whole lot sillier, the six-episode Schmigadoon! (with episodes dropping every Friday through August 13) is a delightful blend of  parody and homage to classic Broadway musicals. Keegan-Michael Key and Cecily Strong play backpacking couple Josh and Melissa, who wander into a quaint town full of painted backdrops and folks who love to burst into songs that tweak classics, including Oklahoma!, Carousel and of course, Brigadoon. The place is weird, but even weirder? Our slightly freaked-out leads discover they can’t return to their own world without first finding their true soulmates.

Created by Ken Daurio and Cinco Paul, the series is directed by Barry Sonnenfeld (Men in Black) with production design by Bo Welch (Batman Returns, Edward Scissorhands), so the quality of the episodes matches the wit of the original (if semi-familiar-sounding) songs. You’re not required to be a golden-age Broadway geek to enjoy. But it can be awfully fun to shout, “Oh wow, that’s a direct quote from ‘Carousel’” to politely indifferent viewers in the room.

Put another way, she’s a filter-free rage machine constantly on the verge of beating the crap out of anyone (rude waitress, manspreader on the subway) who offends her sensibility. That’s why she’s been equipped with an electrode vest and a button to push whenever she starts seeing red.

This self-tasing device, made for her by her shrink (the ever-welcome Stanley Tucci) zaps her tame before she can go homicidal. But even this gizmo can’t keep her in control when the boyfriend she barely got to know (Jai Courtney) gets murdered, and Lindy sets out on a course of revenge to find his killer(s).

There’s not a single original idea in Jolt, basically a salad of Atomic Blonde, Hanna, La Femme Nikita, Red Sparrow, Black Widow and every other film about faux-female empowerment made in the last half–century. But in its tawdry, quipping, very bloody way, it’s a fun ride, directed by Tanya Wexler. It helps that the too-good-for-it cast includes not only Tucci, but Bobby Cannavale, Laverne Cox and (wait for it, literally) Susan Sarandon in a cameo that shows the filmmakers hope to spin off a sequel.

There’s nothing original in The Tomorrow War (138 minutes), which is too big, loud and oversaturated with so-so CG animation to provide the simple, sleazy fun that Jolt does. But it’s an OK, sci-fi time-waster, partly shot in Georgia. Chris Pratt, now officially obligated to headline every Hollywood action film, plays a family-loving teacher who, with other less-prepared hu, volunteers to blast into the future to fight voracious alien bugs that have invaded the world 30 years hence. The past, in other words, is the future’s only hope in this sort of reverse Terminator.

If you parse its time-travel paradoxes for even a minute or two, the whole movie falls apart. But if you’re the kind of person who likes this kind of thing, here it is. At least it’s more fun than Zach Snyder’s recent, ponderously long zombie flick Army of the Dead.

NEED MORE TO BINGE ON? Catch up with our July column, featuring reviews of Netflix’s Lupin and Sweet Tooth, Amazon Prime’s Panic and much more.