Several years ago, Atlanta Symphony Orchestra principal harpist Elisabeth Remy Johnson was listening to the radio as she drove, when she heard an BBC interview that would have a profound impact on her approach to her considerable art.

“There was an Australian politician on,” Remy Johnson recalls. “Someone was challenging her on the quotas they have for women in their equivalent of Parliament. She says, ‘If you think about it — unless you are willing to say that men are inherently better at this than women, we are missing 50 percent of the best people out there.’”

That statement hit hard because it was easy to equate it with her music. Thus began a mission.

While concerns about gender inequity in classical music were nothing new (“It has always been there,” Remy Johnson says), the BBC interview engendered something of an epiphany that inspired her to found the Merian Ensemble, a chamber ensemble devoted to performing music from women composers and to commissioning new works from today’s women composers. Her sense of musical purpose also informs her amazing new recording Quest, released this summer on Albany Records. 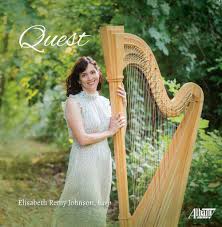 Remy Johnson is fun to talk to — one of those people whose quicksilver intelligence is marked by a blazing passion for her craft, which is infectious and deeply inspiring. Born on Cape Cod, Remy Johnson did not come from a family of musicians, though there was a piano in the house and music was always around. (Her father likes to joke that he bequeathed her his own musical talent, unused.)

When she was 6 her mother took her to a recital, where she saw a harp for the first time. “It was like a magnet,” she recalls. “I remember just being drawn to the harp and how beautiful it was. The lady said that she was tuning, but after the concert she would let me come up and play. Afterward she beckoned me and I got to strum it. I was captivated. There are so many colors that come out of the instrument. Getting to touch the string and make it vibrate with my fingers, the tactile intimacy of the harp — it just got me.”

That musician turned out to be Cynthia “Cy” Gordon O’Neil, who taught at Cape Cod Conservatory. Remy Johnson began to study with her, later attending the famed Salzedo summer harp colony in Maine, where she worked with the legendary Alice Chalifoux. She continued her studies with Ann Hobson Pilot of the Boston Symphony, played in youth orchestras in Boston and at Tanglewood, and won the ASO position while a senior at Harvard.

Quest — the CD takes its title from the disc-opening piece by composer Niloufar Nourbaksh — is a stunner. Historical women composers ranging from the relatively well-known to the decidedly obscure are joined by a handful of works from the present day. Much of this music was originally composed for piano. The transcriptions are all Remy Johnson’s. The selection of repertory was done with meticulous care.

“It depended on how the composers were approaching the piano in specific compositions,” she says. “For example, something with a ton of activity in the low octaves on the piano and lots of repeated notes is not going to work with the vibration of the strings on the harp, it would just be a buzzy mess. Some other deal breakers were intense chromaticism. For example, in ‘Desdemona’ in the Mel Bonis collection. One part of it almost didn’t work and I had to come up with creative ways of using enharmonics and rewriting pitches to get the music across. I always keep in mind what the composer intended. If it is going to sound like a transcription, I am not going to include it.” Those Bonis selections stand as testaments to Remy Johnson’s skill; the ‘Desdemona’ is ravishing.

“With these pieces you also think about what these composers were going through, and that despite being blocked at every turn, the beauty they created,” Remy Johnson says. “Each woman has a different story.”

Mel Bonis, for example, was an incredible natural musician, but her parents had to be talked into letting her attend conservatory. Once there, she was in classes with Debussy and outshining him. Then Bonis fell in love with a poet, her parents yanked her out of the school and “married her off to some guy.” She continued to compose in isolation and remarked to her daughter near the end of her life that her greatest regret was not getting to hear her music performed.

“Some of her compositions were performed, but they never had the international acclaim they should have,” says Remy Johnson. “She did her career on her own, as a side gig from being a wife and mother.”

The Boston Symphony performed the music of Amy Beach early in the 20th century. “In the 20s’, she tried to get an American league of women composers and the Depression knocked it down,” says Remy Johnson. “It’s cyclical. We have these moments of discovery, but we need to keep talking about it, and keep playing the music, or else it will go through another down period.”

In 2018, Remy Johnson was examining listings of future ASO programs and became increasingly dismayed with the lack of balance she saw. “Let’s just say I was a little frustrated,” she says wryly. “I was doing dishes or something, and thought, ‘Well, I can’t just wait for all these great women composers to be programmed apparently. So, let’s do it ourselves.’ I started talking to a handful of my colleagues and asked if they wanted to put on a chamber concert with all women composers, and they were all 100 percent behind it.”

“Our first concert was more of a historical retrospective, going from Clara Schuman,” Remy Johnson says. “I am a huge Clara Schuman fan. Not only did she support all their children after the early death of Robert; I just cannot imagine keeping that family afloat and keeping her career going while dealing with her husband’s mental illness at a time when that had no understanding. To deal with that pain and keep her family and career together — she was a superhero.”

In May, the ensemble performed and livestreamed American Music for Today and Tomorrow at the First Presbyterian Church of Atlanta, a program that focused on first-generation and immigrant American women. The ensemble commissioned The Book of Spells by Brazilian-American composer Clarice Assad, which was given an ASO premiere in March. Plans call for a new commission each year.

“We are putting next year’s program together and going back to a balance of historical and contemporary composers,” says Remy Johnson. “The commissions are important, but we need to include the historical women as well. Just because they have been ignored doesn’t mean they should still be ignored. We want to get their music out there, too.”

Remy Johnson remains vigilant about barriers but celebrates some real progress. “There is inertia and lack of awareness of the depth of the music we have missed,” she says. “There is a lot of work to be done. But there are also great programs for young women and more awareness of the need for balance. I think there is hope. There are organizations who want this to be part of their identity and are committed to having an open podium and open program. This is very much a long-term project.”

One can hardly imagine a better spotlight for women composers than what Remy Johnson has achieved with Quest. It’s one of the most beautiful solo instrumental recordings released in some time. She’s understandably proud of the CD but wants people to know that its music is only part of a process.