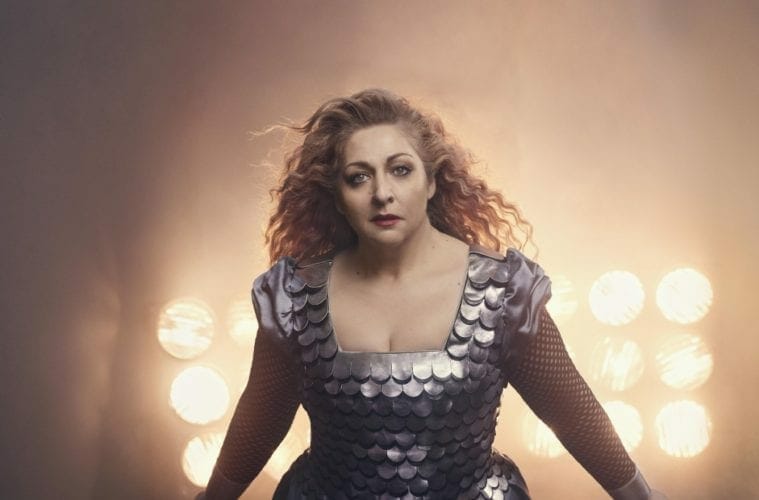 Soprano Christine Goerke has found her voice — and it's mighty. (Photo courtesy of the Met)

Artists sometimes talk about how “every act of creation is first an act of destruction.” Composing never came easy for Beethoven, who may have sacrificed his sanity in the search for perfection when writing Fidelio, his only opera.

On June 6 and 8, the Atlanta Symphony Orchestra concludes its two-year Beethoven survey — and marks the centennial of the end of World War I — with semi-staged performances of Fidelio. And if there’s an artist to prove that destruction leads to creation, it’s the acclaimed soprano Christine Goerke, who suffered a vocal crises in 2003 — the same year she won three Grammy Awards with the ASO for their recording of Vaughan Williams’ A Sea Symphony, conducted by Robert Spano. She returns to Atlanta for the first time since 2003 with a more matured voice and a new sense of confidence to perform the cross-dressing title role of Fidelio/Leonore.

In just the past few seasons, Goerke has emerged as a powerhouse singer with a somewhat daffy, big-personality social media presence. The New York Times describes her as a “cross between the great Swedish soprano Birgit Nilsson and Tina Fey.” But before making her debut in major roles such as Brünnhilde in Wagner’s epic “Ring” cycle at the Metropolitan Opera last month, she had her fair share of self-doubt.

In the 1990s, Goerke was a young and insecure artist studying at the Met, where she built up her voice with a steady diet of Baroque- and classical-era music, including Handel, Gluck and Mozart. Robert Shaw, the revered choral conductor and then-music director of the ASO, saw her potential. He had her singing with the ASO when she was just 24. Goerke sang as Brünnhilde in Wagner’s epic “Ring” cycle at the Met last month. (Photo courtesy of the Met)

“I absolutely was not [a dramatic soprano] when I first started singing,” she says, reached earlier this week by phone from her hotel in Atlanta. “But it seemed pretty clear to everyone around me that was the direction I was going to head.”

Shaw tried to push Goerke toward more dramatic soprano roles, which require a powerful, emotive voice that can cut through a full orchestra, but Goerke and her vocal professor Elaine Bonazzi were hesitant — if she pushed too hard too soon, her voice could be strained and ultimately destroyed. It’s a fate that has fallen on many opera singers if they progress too quickly. Goerke remained in her vocal comfort zone of lyrical repertoire, the Baroque and classical masterpieces. But she continued a rapid ascent into stardom, conquering every role she performed.

She was starring in Handel’s enchanted Alcina, which opened New York City Opera’s season in 2003, when her voice began to fail on stage. Influential critics expressed concerns about her performance. In the cutthroat world of opera — where productions are planned years in advanced — negative reviews can destroy a singer’s reputation.

One New York Times review was merciless: “Given Ms. Goerke’s past excellence, one would have expected her to triumph in the demanding title role. There were admirable qualities . . . . But her voice did not consistently do what one sensed she wanted it to.”

“When it was time for me to make the switch, I cried backstage,” Goerke says. “It was like losing an old friend. I was backstage waiting for bows from Handel’s Alcina, and I knew it was the last Handel I was going to do.” She was unable to get the support underneath her voice that she once did. As it turns out, the problem was that her voice had grown too large for the roles she was singing. “Everything that I had always done just didn’t seem to be working anymore,” she says. “I almost quit.”

Dr. Thomas N. Guffin, an Atlanta-based otolaryngologist and dedicated attendee of the ASO and Atlanta Opera, says singers often reach a turning point when they’ve outgrown their voices. With more than 32 years of experience as a ear, nose and throat doctor, Dr. Guffin regularly treats singers, actors and professional speakers. Among his patients are singers performing lead roles at the Met, Milan’s La Scala, London’s Covent Garden and the Vienna State Opera.

“A lot of singers come in, and they want me to look at their vocal cords,” he says. “Sometimes they are hoping there is something wrong and are wishful that I can do surgery and fix it. But there may be nothing wrong at all — it’s just that they need to work on their technique a bit more.”

Instead of quitting, Goerke persisted — deciding it was time to embrace the change in her voice. After more than a decade of working with Stony Brook University vocal instructor Bonazzi, Goerke decided it was time for a new teacher and a new direction. Starting in late 2003, she spent nearly two years retraining, learning new techniques and new repertoire with respected soprano Diana Soviero. During this time, Goerke and her family — she is married with two daughters — went into major credit card debt to stay afloat. As she continued training with Soviero, her voice grew dramatically. Her first breakthrough back into opera came in 2005, in Japan, as Chrysothemis, the unhinged sister in Strauss’ Elektra.

“I sang three runs of that role, and people came to me immediately and said they wanted me to switch to the title role of Elektra,” she says, speaking of what’s perhaps still the most shocking, horror-filled opera in the standard repertoire. “They told me I couldn’t sing these smaller roles anymore, and I had to either step up or sit back until I was ready.”

She was 37 when she first played Elektra, which she says is extremely young for an opera singer. But as Goerke puts it, “It’s not always about your age or whatever; it’s listening to your body.”

Now 50, she’s become one of the most successful sopranos of our time. In addition to Elektra and Brünnhilde, she’s performed title roles in Turandot, Ariadne auf Naxos, Fidelio and more. And she’s paid off all her credit card debt.

Performing as Leonore this week with the ASO requires the same heft and stamina needed to perform operas by Wagner and Strauss, but also the finesse and flexibility of her lyric soprano roots to navigate the role. Fidelio is a “rescue opera,” in which the heroine dresses as a man and gets a job as a jailer in order to save her husband, a political prisoner locked away in the dungeon. It’s really an opera about compassion, justice and love.

“Christine has been singing with us since 1992,” recalls Jeff Baxter, a tenor and administrator of the ASO Chorus. “What’s astounding is that she’s kept all the good things about her voice that she had when she was singing her original roles, and rather than diminish, it’s enhanced her ability. She has an enormous sound, and it’s effortless.” Christine Goerke promotes her upcoming performances via her Twitter — @HeldenMommy — with a sense of humor.

Whether she’s performing as a dedicated lover, an unhinged sister or a valkyrie warrior, Goerke takes on each role with utmost seriousness — she saves the jokes for Twitter, @HeldenMommy, where she tweets photoshopped images of pool rings and Mr. Bean when poking a bit of fun at her performances in Wagner’s “Ring” cycle.

“This experience taught me that I can persevere through just about anything,” Goerke says. “I am not afraid to try something new, and I’m not afraid to go in a different direction. In a way, what I did gave me the confidence to throw everything I have on stage.”